END_OF_DOCUMENT_TOKEN_TO_BE_REPLACED

She asked the city to compel Joshua to remove the post and the lawyer the city used to look into it came back with a big fat no can do: END_OF_DOCUMENT_TOKEN_TO_BE_REPLACED

Remember Fullerton First? It’s the feel-good facebook fraud created by one Gretchen Cox, and populated by the usual suspects – whose mission is to run interference for the scamology perpetrated by the likes of our former DUI city manager, Joe Felz, the cops who let him go, and lobbyist-councilperson Jennifer Fitzgerald and her campaign contributors – like the construction manager Griffin Structures that “oversaw” the Hillcrest Stairs to Nowhere ripoff. You might recall that the egregious Fitzgerald is also a proud, flag-waving member of Fullerton First. Well, that sure figures.

Here’s a fun reminder of how the folks of Fullerton First deal with the embarrassment of expensive Fullerton government failure. The strategy is to bury legitimate criticism in double talk and obfuscation.

“Fhern” Alvarez brings up the serious problem of the manifest shoddy workmanship on the Hillcrest steps. Notice how Ms. Cox immediately concocts a made-up “report” that allegedly addresses “point by point every construction concern.” Somehow the worst example of a public works f-up is transformed into a “well-done” project where the contractor went “above and beyond contract and safety requirements” – an outright lie.

When Alvarez persists, Cox hilariously tells her (or him) that people might have rolled down the hill anyway before the $1.6 million steps were built and suggests that somehow child safety on these rickety contraptions is a matter of individual responsibility!

Fortunately, Alvarez will not be dissuaded by the bullshit. And so Fhern, FFFF salutes you.

Gretchen Gregory Cox Fhern- I was writing a response to your comment and accidentally deleted it when some wierd thing popped up. My apologies and please feel free to repost it. In the meantime, there is a report that goes point by point thru every construction concern that has been raised since the steps opened in May. It is actually a well done project where the builder went above and beyond the contract and safety requirements at no additional cost to the city- and came in under budget. Just so you know.
· July 8 at 12:46pm

Fhern Alvarez No worries. But I have been there numerous times and there are spots where the boards are cracking and areas where if a kid is left unattended they can fall down a hill. Doesn’t matter if it’s under budget. In the long run it will cost more.
· July 8 at 3:50pm

Gretchen Gregory Cox People could have fallen down that hill long before the stairs went in. At some point when are individuals responsible for not paying attention? Should the city fence off every inch to prevent that- I don’t mean that to be sarcastic…. just asking what people think would work best.
· July 8 at 4:03pm

Fhern Alvarez Gretchen Gregory Cox it is a city project and people now a days are only looking for an easy way to make money. Just saying
· July 8 at 4:05pm

Kim Wolfe The exposed wires I saw in a photo by the stairs really concerned me
· July 11 at 9:09pm

END_OF_DOCUMENT_TOKEN_TO_BE_REPLACED
Posted onJune 14, 2017Behind Closed Doors
by Deadeye24 Comments on We Get Mail ─ Jan Flory and Gretchen Cox up to No Good 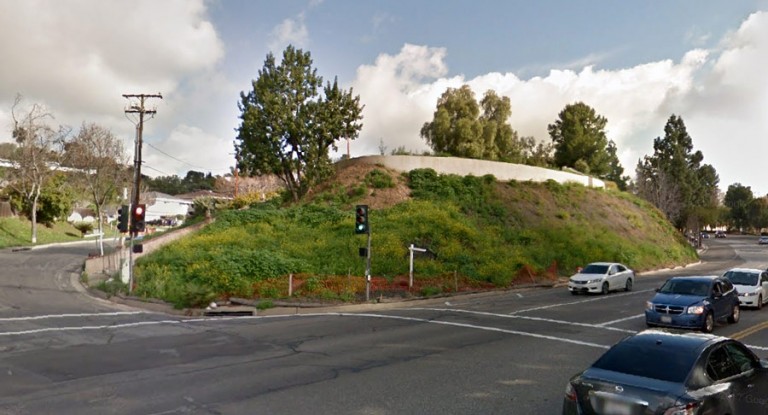 Remember last year when Jan Flory claimed she was ‘retiring’ from City politics?  Much to our chagrin, that never happened.  Instead, she’s taken up a new calling with close pal Gretchen Cox.

A Friend was gracious enough to share a letter they plastered all over the neighborhood last month: 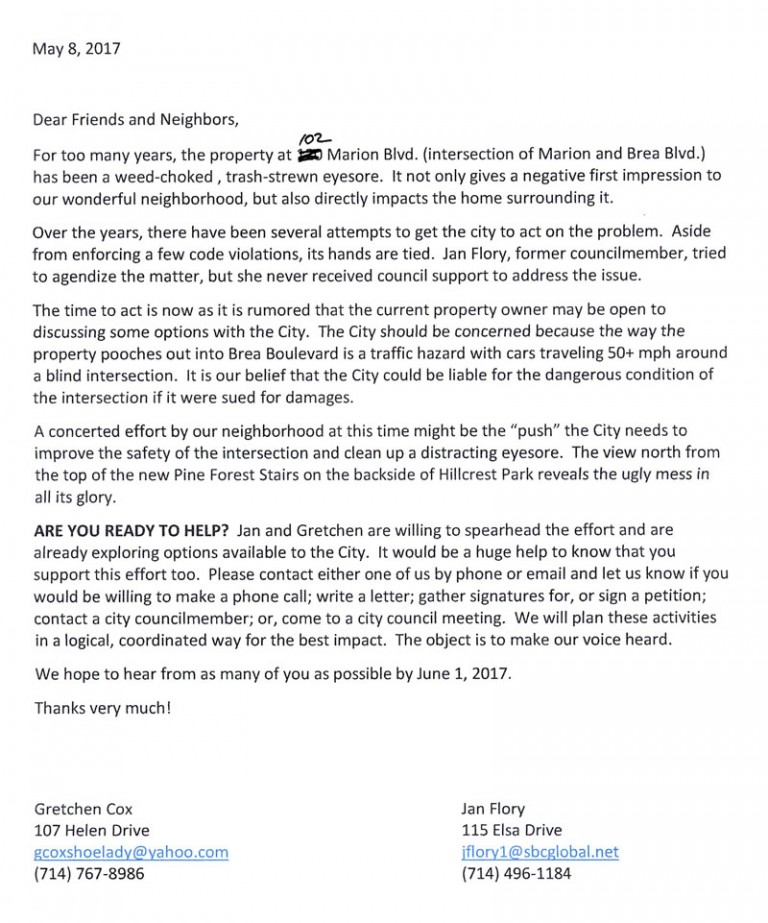 This isn’t some altruistic idea in the name of public safety.  Gretchen and Jan simply have an aversion to the aesthetics of said land, with Gretchen living two houses away and Jan living further up the hill.

Leave it to these numbskulls to use traffic hazard as a ploy for the City to dole out money for appearances.  The intersection already has a traffic signal and the frequency of traffic accidents is no worse than other major intersections across the city.  Don’t like the appearance of the land?  Fine.  Focus on that.  Don’t try to lump traffic concerns in at the same time.

What’s more, the timing of the letter is particularly obnoxious given that the property was listed for sale in February.  Were they hoping to derail a potential sale so the City could swoop in and acquire the parcel?

Since the letter was written, the property has gone into escrow.  What an awful way to welcome someone to the neighborhood.

END_OF_DOCUMENT_TOKEN_TO_BE_REPLACED
Posted onMay 24, 2017May 24, 2017Behind Closed Doors
by David Curlee45 Comments on The Parks & Rec Manipulation of Public Comments

Readers of this blog know good and well the many failures of the Pine Forest Stairs at Hillcrest Park, not to mention the $724,000 bridge to nowhere that will soon become reality.

What you probably don’t know about are the shenanigans used by City Hall to influence the City Council vote.

Funding for the bridge, fountain, and “Great Lawn” improvements was approved on a 3-2 vote (Whitaker and Sebourn: No) at the May 16 City Council meeting.  A couple weeks earlier, I made a records request for documentation on Hillcrest Park.

Jennifer Fitzgerald’s appointee to the Parks and Recreation Commission, Gretchen Cox, made public comments in support of the project.  Having skimmed through the e-mails provided by City Hall the day before, I thought to myself, wait a minute, portions of her comments sounded awfully familiar.

As it turns out, my suspicions were correct.  A week prior, Parks & Recreation Director Hugo Curiel had one of his employees, Doug Pickard, e-mail Gretchen Cox a list of “talking points” to assist her in making attacks on Councilmembers Sebourn and Silva: 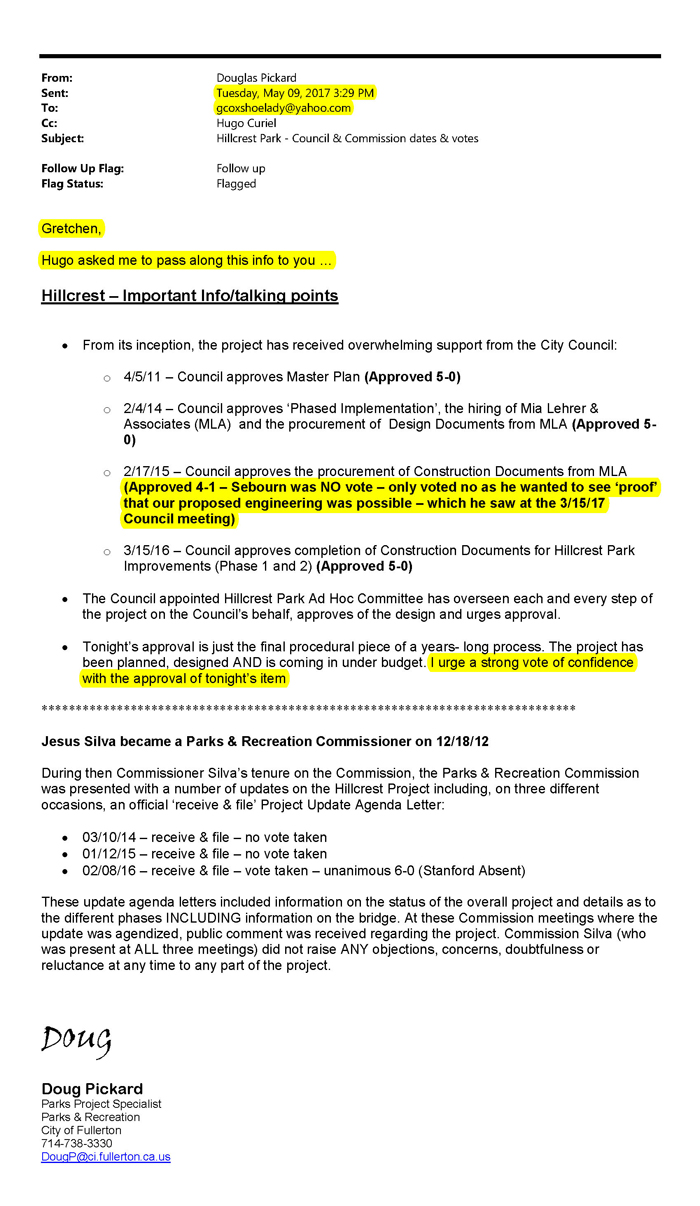 Portions of the e-mail were in fact used by Gretchen Cox during public comments.  Let’s go back and compare the e-mail to what she actually said.  This ought to be fun! END_OF_DOCUMENT_TOKEN_TO_BE_REPLACED