Okay, there seems to be confusion about the term “repuglican” as often used here on FFFF. The term does not refer to a political party, but rather a personality type within the GOP. The Dems have their own version, no doubt, but since we are a red county we are stuck with the ‘pugs. Please read the following post from October 2009.

Repuglicanism has always been a target of our blog because it seeks to empower, and enrich the grifters who put imbeciles like Bankhead, Jones and McKinley in charge of doling out government welfare to the high rollers. It also seeks to defend the all-important status quo above all else.

This morning we received the following e-mail from a Friend:

Dear FFFF, some of your posters keep using the term “Repuglican.” I am not sure if this is simply a typo or if you mean to use this unusual term. Can you please clarify? Thanks.

Sure. Be happy to. This locution is no accident. It is a fusion of the words Republican and repugnant, from which you may draw the obvious conclusions.

Here is a definition from the Urban Dictionary:

We apply the term to describe local Republicans of the same ilk, although the issue of “neo-conservativism” is largely irrelevant here. These individuals are people who pursue the politics of partisan affiliation for its own sake, but also for what they can get out of it. The main thing, the only thing, really, is to stand for the Party (as a convenient vehicle for self-promotion, of course!), and of course to oppose the Other Party. Issues themselves mean almost nothing except as way to promote themselves in the wider context of promoting the Party. Inner conviction means little; philosophical beliefs mean little – except for getting and hanging on to the strings of political power in order to pull and persuade them in your direction.

Repuglicans love big business interests because those are the guys with the money; the high-rollers who will enable your “conference” in Maui.

A red bastion in a blue state, OC is chock-full of Repuglicans – who use the local municipal and County governments for their own advancement and enrichment. The Legislature is hopelessly Democrat, but this does not mean that the doors to fun and profit are completely closed to Repuglicans. Especially if they hang around long enough.

And so is this:

And here’s one of the best examples:

Additional examples of the species are welcome! 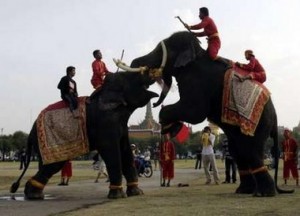 What’s really fun is the comments thread where the insiders have at it.

Damn, do we finally have a fun Republican blog in town?

Have a listen to last night’s KRLA 870 radio show, where OC GOP leadership candidates Allan Bartlett and Deborah Pauly are interviewed about the current state of the Republican Party in Orange County.

The elections for the GOP board take place on Monday night.

END_OF_DOCUMENT_TOKEN_TO_BE_REPLACED
Posted onJanuary 14, 2011January 14, 2011Local Media
by admin24 Comments on GOP Vice Chair Candidates Duke It Out on the Radio

The Martha Montelongo Show, Co-Hosted by Chris Thompson will be kicking up the dust in the OCGOP 1st Vice Chairman Race this Saturday night at 11PM on 870KRLA.

Jon Fleischman was invited, but he says 11PM is past his bedtime. Does he have this thing in the bag? Will he decide to down a Red Bull and change his mind? The forum will occur on 870AM KRLA beginning at 11:00PM this Saturday, Januray 15th. Listen live online at krla870.com. 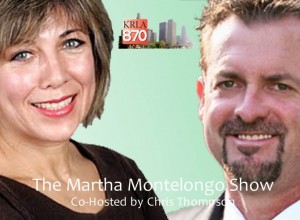 Has the OCGOP really gotten its mojo back or is REVOLUTION within the Party inevitable? Tune in on Saturday night!

END_OF_DOCUMENT_TOKEN_TO_BE_REPLACED
Posted onJanuary 13, 2011January 13, 2011Orange County Central Committee
by admin16 Comments on Calling It Like You See it

Friends, here’s a fun look back at a defining moment in the Shawn Nelson-Hairbag Sidhu dust-up, Round 1. It was at OCGOP Central and the worst ‘pugs were trying to dodge a Central Committee endorsement of Nelson. These ‘swipes were actually pitching “the two good republicans” bullshit that Sidhu hoped would deflect attention to his incompetent carpetbagging assclownery.

Well, while every ‘pug and every “journalist” in OC was turning a blind eye to Sidhu’s district hopping, one guy really stood tall, and that’s current OCGOP Chair candidate, Tim Whitacre. Check it out:

Hmm. A guy who would oppose his own brother’s carpetbagging. Principle over payday? Hoo-boy, the repuglicans ain’t gonna like that!

END_OF_DOCUMENT_TOKEN_TO_BE_REPLACED
Posted onNovember 3, 2010November 3, 2010Behind Closed Doors
by The Fullerton Harpoon11 Comments on The Lights Have Gone Out on Lucky Way

The neighbors will tell you that, yes, someone was living there. Once in awhile they would catch a glimpse of a squat little kid whose infrequent visitors called “Yo, Billy Dude!”

The grass looked green, so somebody was paying the water bill, alright. And there was that one party with loud speed metal blaring. Once in awhile a pale round face peered out from behind the red velvet drapery to surreptitiously survey the neighborhood.

Two cars used to be seen in the driveway. The same two cars. They never moved. But now the cars are gone and the house is dark.

Sunset has descended on Lucky Way.

Last night I had a few hours to kill so I stopped by the OCGOP Central Committee in Irvine. There were plenty of inflated egos and asses being kissed. One person who seemed to be high on the GOP pecking order went into a tissy because they didn’t have a name tag. And then when one made, it didn’t say HONORABLE something-or-other. It was a shameless packed house with Central Committee-Elect Shawn Nelson and Harry Sidhu absent. In fact NO ONE from Harry’s 69th AD was present to vote. Nice participation!

Among the highlights worth noting, Tom Tait got smacked around for his support financial support of two Democrats for Anaheim City Council, Galloway and Chavez. But it didn’t stop there. Apparently Tait has not read the official California Republican Party Platform and answered, albeit honestly, to that effect on his GOP endorsement application.

Maybe the OC Republican Party should make all of the applicants for endorsement sit down and read the Party’s Official Platform.

Nelson will be a leading force against the unions when it’s time to negotiate out of control pensions. His voting record make shim a strong fiscal conservative who is not afraid to stick his neck out for taxpayers. Both of his main opponents are union-supported carpetbaggers who live outside the 4th district.

Just mark the spot for Bill Hunt and watch the establishment scramble like cockroaches. This is one of the most important races in this June election.

In the words of Attorney Bernie, we need to get private practice attorneys seated as judges. People don’t realize how important it is to keep insider government lifers from usurping the judicial powers

Webster has done a good job as Assessor.

The incumbent, Tom Daly, has been lashed over and over on this site for wasting our money and feeding expensive, do-nothing contracts to his pals. Hugh Nguyen is a great candidate.

Sitting DA Tony Rackauckas could not be bothered to fully investigate the well-documented perjury accusations made against Harry Sidhu, although he did find time to prosecute Steve Rocco for a bottle of stolen ketchup.

(all or parts of Fullerton, Brea, Placentia, Anaheim & La Habra)

Candidates are designated by Allan Bartlett based on certainty that candidates were Tea Party, Campaign For Liberty, and CRA friendly.

This is a no brainer. Abel Maldonado should not be rewarded for being the main reason that taxes are higher CA during the last budget cycle. Vote for Sam Aanestad.

Orly Taitz  has not been helping herself in the media with her over the top stands on Obama’s birth certificate and a few other issues where she basically has taken herself out of contention because of the way she has come across to voters.

I’m not impressed with Tony’s endorsements the last few years, but he is our choice for Controller here.

It’s either this or leave it blank. Her endorsement of repuglican carpetbagger Linda Ackerman last year makes her suspect.

John Eastman is far and away the best conservative choice for CA Attorney General.

The other candidate Mike Villines was the GOP leader in the State Assembly that helped deliver the largest tax increase in CA history. Don’t reward him with your vote here.

No Republican in good conscience could support Michelle Steel anymore after what she did to Irvine Republicans. She has been giving aid and comfort to Democratic Mayor Suhkee Kang because they’re both Korean. Last time I checked, that’s not a very good reason to support anybody, especially if they are ideologically against most everything that you say you are for.

This is another no brainer. Chuck gets it. He understands that in the Constitution, there are less than 18 specific enumerated powers delegated to the Congress. He will be a great US Senator and he can beat Barbara Boxer in the fall.

Today the Republican Party of Orange County trained it’s sights on the incompetent illiterate campaign of Hide-n-Seek Sidhu just like we have been telling you all along. And here’s the piece: 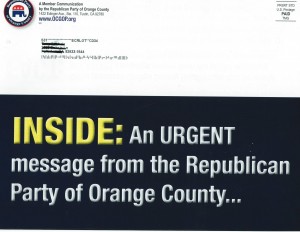 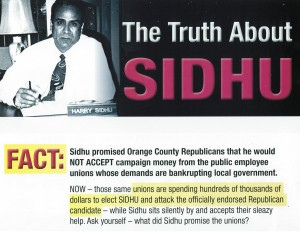 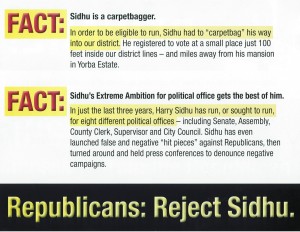 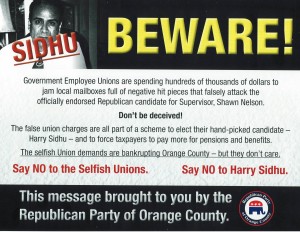 END_OF_DOCUMENT_TOKEN_TO_BE_REPLACED
Posted onMay 24, 2010May 24, 2010Dead heads
by Joe Sipowicz16 Comments on What Is Harry Sidhu Hiding? Just About Everything

By now we have all seen the campaign mailers produced by Hide-n-Seek Sidhu and his union pals asking what Shawn Nelson is hiding and that got me thinking about Harry Sidhu and what he might be hiding from the people of the 4th district.

1. Sidhu doesn’t live in this district and he doesn’t want you to know it.

2. Sidhu committed perjury twice when he claimed to have live at the Calabria apartments.

3. Sidhu is the public employee union candidate and his pals in the union are spending hundreds of thousands of dollars to put their puppet in office.

4.  Sidhu is barely intelligible and has no grasp of the basic functions of county government.

5. Sidhu is a perpetual office seeker who is constantly running for higher office.

6. Despite his claims to the contrary as an Anaheim city council member Sidhu has voted for dozens of fee and utility rate increases.

So there’s the Sidhu record. No wonder his handlers want to keep it a secret and I’ve only just scratched the surface.