She asked the city to compel Joshua to remove the post and the lawyer the city used to look into it came back with a big fat no can do: 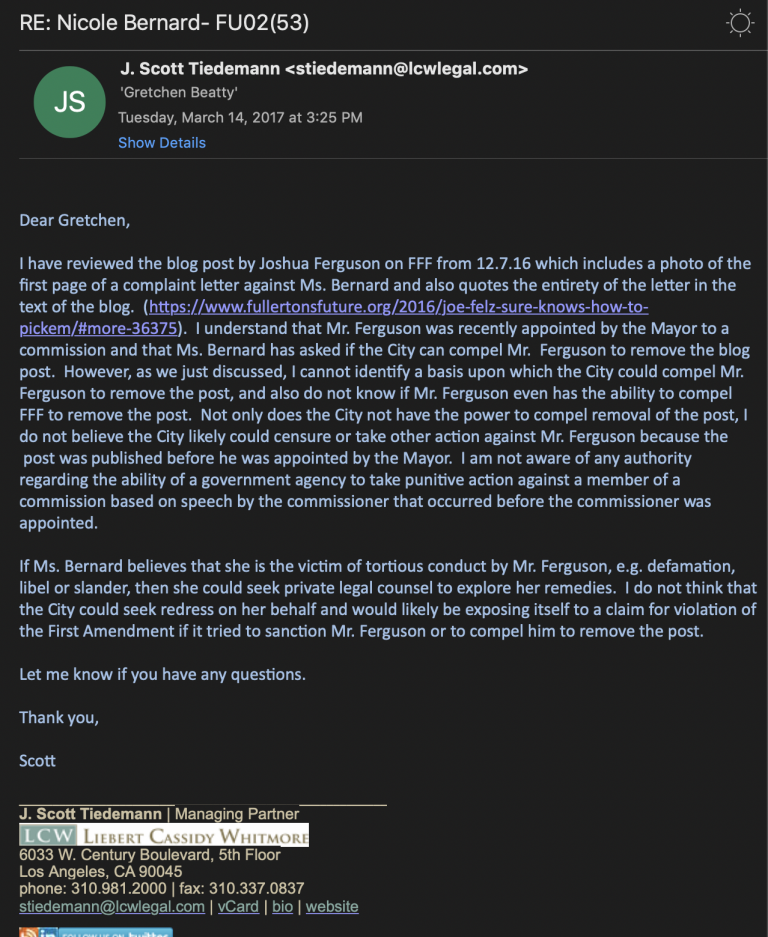 “I understand that Mr. Ferguson was recently appointed by the Mayor to a commission and that Ms. Bernard has asked if the City can compel Mr.  Ferguson to remove the blog post.  However, as we just discussed, I cannot identify a basis upon which the City could compel Mr. Ferguson to remove the post, and also do not know if Mr. Ferguson even has the ability to compel FFF to remove the post.  Not only does the City not have the power to compel removal of the post, I do not believe the City likely could censure or take other action against Mr. Ferguson because the  post was published before he was appointed by the Mayor.  I am not aware of any authority regarding the ability of a government agency to take punitive action against a member of a commission based on speech by the commissioner that occurred before the commissioner was appointed.”

Next up we have an anonymous complaint against former at-large appointee to Parks and Recreation, Jose Trinidad Castaneda III: It has come to my attention that you have a commissioner on your board by the name of Jose Trinidad Castaneda III who is actively spewing racism and hatred on Facebook. I have encountered this individual a couple times in the past couple months, both ending with him making personal attacks about my race, among other hateful things. I believe it is in your best interest to not have such a hateful individual represent your entity. It burdens my heart as an ally of the LGBTQ community and also an environmentalist that there is someone like this. Below I will attach a conversation that occurred today. I will also be censoring my name/picture as I would like to remain anonymous in this situation. I also hope that I will receive an update on the matter.

In this case the solution seems to have been to point to the commissioner handbook and that alone. Considering that JTCIII stayed on Parks and Recreation until it was downsized, nothing much happened. 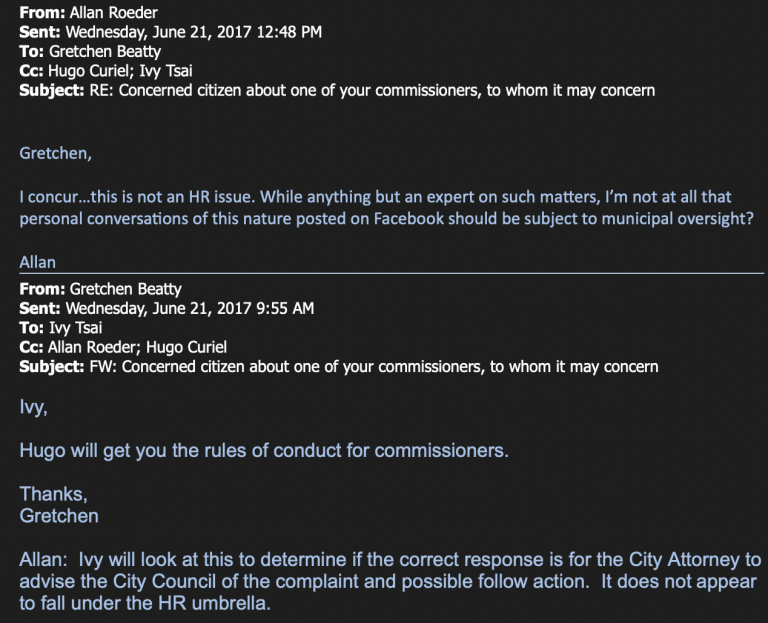 This is an interesting take considering what is in the commissioner handbook AND the fact that the handbook was the basis for removing Barry Levinson from the same Parks and Recreation commission years beforehand.

Here’s the pertinent page from the commissioner handbook: 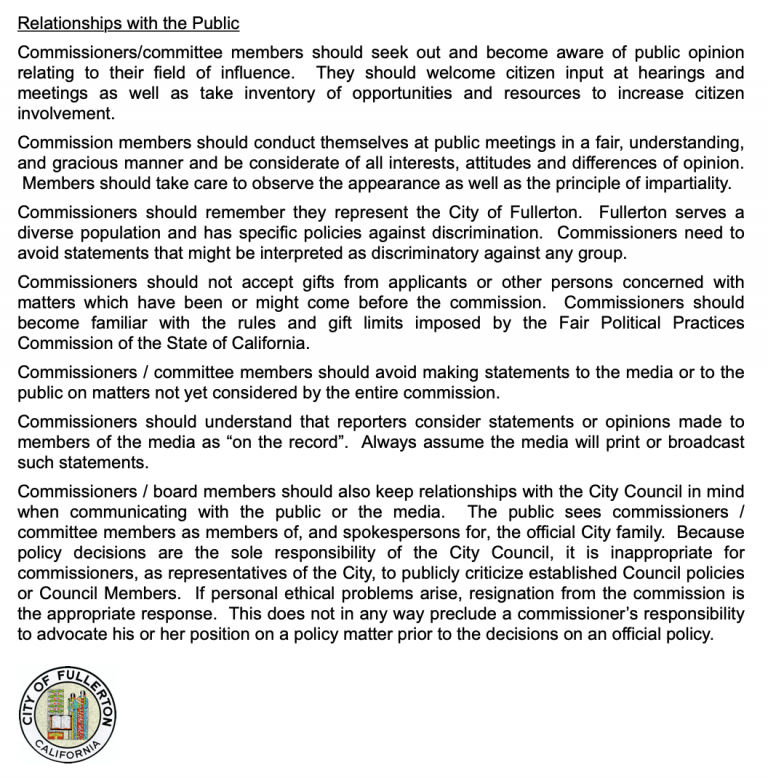 “Commissioners / board members should also keep relationships with the City Council in mind when communicating with the public or the media.  The public sees commissioners / committee members as members of, and spokespersons for, the official City family.“

To round out this fun game of bureaucratic bungling and inconsistency we have a complaint lodged against Gretchen Cox for her affinity to follow our own Joshua Ferguson around the internet barking like Fitzgerald’s lost and poorly trained puppy dog.

Here is his complaint:

I would like to formally complain about abusive conduct by Fullerton City
Parks and Recreation Commissioner Gretchen Cox.

For over a year now she has been abusive to me in online forums, including
her own Fullerton’s First Facebook Group, and has tried to turn people
against me because she disagrees with my politics and activism. She has
impugned my character and characterized me as not representing “normal
people”, going so far as to compare me to OJ Simpson in a comment on the
Facebook page of the largest Radio station in the LA/OC metro area.

I have attached screenshots from her Facebook activity as evidence of her
behavior.

I believe her actions constitute abusive conduct as outlined in Fullerton
Resolution No. 2015-36, section 8.

I also believe her actions constitute a violation of the Commissioner’s
Handbook as quoted as follows;

“Commissioners should remember they represent the City of Fullerton.
Fullerton serves a diverse population and has specific policies against
discrimination. Commissioners need to avoid statements that might be
interpreted as discriminatory against any group.”.

And specifically from page 23:

“Commissioners / board members should also keep relationships with the
City Council in mind when communicating with the public or the media. The public sees commissioners / committee members as members of, and
spokespersons for, the official City family.”.

On 21 October 2014 Councilwoman Jennifer Fitzgerald stated it very nicely
at about the 3:38:40 mark during the city council meeting when she said
“The handbook that every commissioner gets when they sign up to wear a
name tag for the city says that ‘If personal, ethical problems arise
resignation from the commission is the appropriate response.’”.

Councilwoman Fitzgerald further went on to state, to her credit, that
“Freedom of speech is a right that we all have but being on a commission
in this city is a privilege and that privilege comes with a greater
responsibility. To treat the people of this city with dignity and honor.”

Personally I don’t care if Ms. Cox wants to attack me but I worry about
the chilling effect on the general public and I might feel differently if
she didn’t attack other members of the public as well. What message does
it send when the citizenry sees a City Council Appointed member of one of
our most active committees attacking people for speaking in public?

Further still, the Commission handbook makes it clear commissioners are
not to publicly voice opposition to a decision the council makes.

Ms. Cox, on her Fullerton First Facebook Page (screenshot attached), has a
post complaining about council approving a bee ordinance. She states “I
guess Chaffee and Whitaker don’t care about potential risks to others.”.

Clearly this Commissioner cannot fulfill her obligations, follow the
guidelines or stop herself from spitting venom at those she opposes.

Again, it is not that Ms. Cox feels she needs to attack people on her FB
page or the pages of others but it sends a terrible message to the
community. It also sends a contradictory one when her appointer, Mrs.
Fitzgerald, is on record opposing the very behaviors put forth by Ms. Cox.

Thank you for your time and I look forward to seeing this resolved in the
most appropriate way possible.

The city initially had no idea how to even respond to such a complaint. City Manager Domer asked if the city has a policy in place for such a situation. This complaint took place after the Levinson, Castaneda and Ferguson complaints so the idea that the city manager didn’t even know if a policy existed is telling. 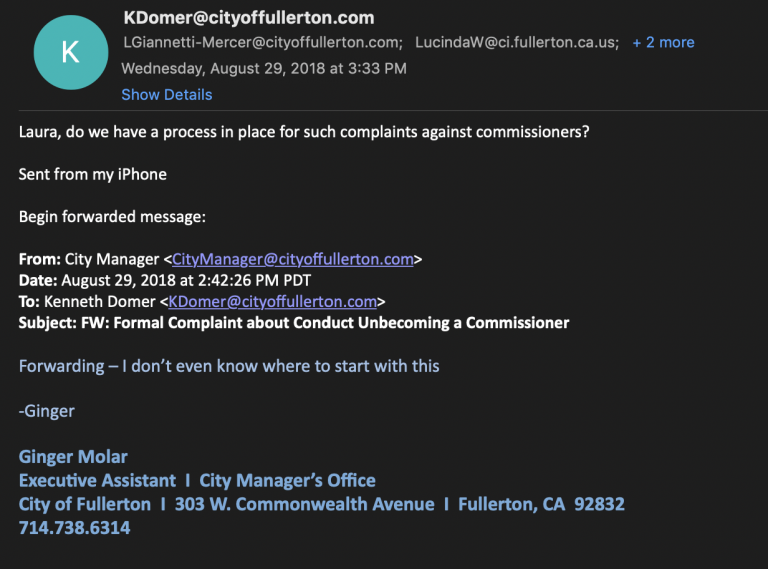 But yes, the city has such a policy. It’s Resolution 2015-36, Anti-Harassment, Discrimination, Retaliation and Abusive Conduct Policy. This resolution outlines a policy which was completely ignored in the Castaneda issue mentioned above but applied in the Levinson case.

After sorting out if a process existed the city brass tried to figure out what to do before even doing any legwork. Then it occurred to them that finding Cox guilty out of the gate might be an issue. 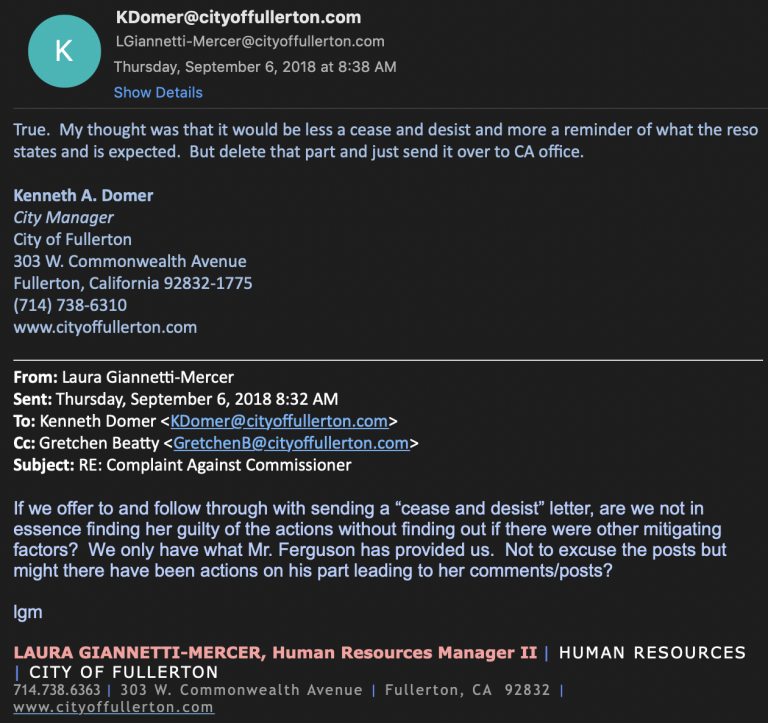 Apparently the city ran interference for Ms. Cox by first dithering and then finally asking to interview Joshua a month later at the end of September 2018. Then in February of 2019, 5 month later, the city finally sustained part of the complaint only to apply the wrong part of the municipal code to a part they exonerated. 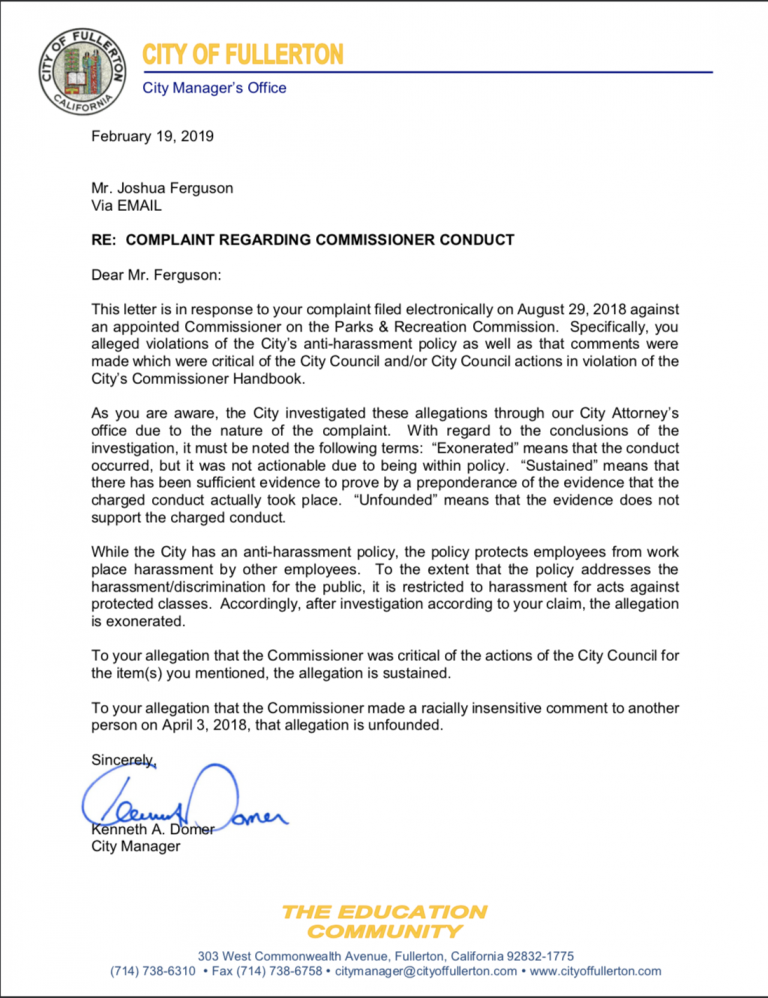 “To the extent that the policy addresses the harassment/discrimination for the public, it is restricted to harassment for acts against protected classes. Accordingly, after investigation according to your claim, the allegation is exonerated.

“To your allegation that the Commissioner was critical of the actions of the City Council for the item(s) you mentioned, the allegation is sustained.”

To which Joshua responded that they weren’t even following their own resolutions. 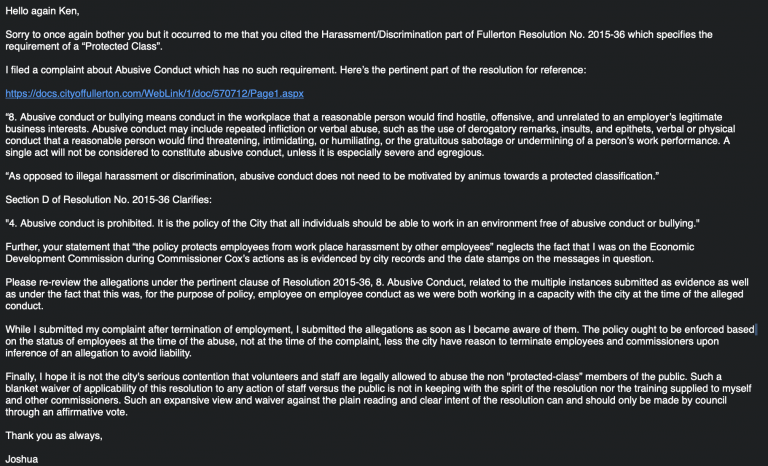 “Sorry to once again bother you but it occurred to me that you cited the Harassment/Discrimination part of Fullerton Resolution No. 2015-36 which specifies the requirement of a “Protected Class”.

I filed a complaint about Abusive Conduct which has no such requirement. Here’s the pertinent part of the resolution for reference:

“8. Abusive conduct or bullying means conduct in the workplace that a reasonable person would find hostile, offensive, and unrelated to an employer’s legitimate business interests. Abusive conduct may include repeated infliction or verbal abuse, such as the use of derogatory remarks, insults, and epithets, verbal or physical conduct that a reasonable person would find threatening, intimidating, or humiliating, or the gratuitous sabotage or undermining of a person’s work performance. A single act will not be considered to constitute abusive conduct, unless it is especially severe and egregious.

“As opposed to illegal harassment or discrimination, abusive conduct does not need to be motivated by animus towards a protected classification.”

“4. Abusive conduct is prohibited. It is the policy of the City that all individuals should be able to work in an environment free of abusive conduct or bullying.”

Further, your statement that “the policy protects employees from work place harassment by other employees” neglects the fact that I was on the Economic Development Commission during Commissioner Cox’s actions as is evidenced by city records and the date stamps on the messages in question.

Please re-review the allegations under the pertinent clause of Resolution 2015-36, 8. Abusive Conduct, related to the multiple instances submitted as evidence as well as under the fact that this was, for the purpose of policy, employee on employee conduct as we were both working in a capacity with the city at the time of the alleged conduct.

While I submitted my complaint after termination of employment, I submitted the allegations as soon as I became aware of them. The policy ought to be enforced based on the status of employees at the time of the abuse, not at the time of the complaint, less the city have reason to terminate employees and commissioners upon inference of an allegation to avoid liability.

Finally, I hope it is not the city’s serious contention that volunteers and staff are legally allowed to abuse the non “protected-class” members of the public. Such a blanket waiver of applicability of this resolution to any action of staff versus the public is not in keeping with the spirit of the resolution nor the training supplied to myself and other commissioners. Such an expansive view and waiver against the plain reading and clear intent of the resolution can and should only be made by council through an affirmative vote.”

Now here we in July 2019, 5 months later again, and there have been no updates. Why? Because the bouncing ball of local bureaucracy can’t be consistent, can’t follow the rule of local law and certainly can’t be honest and transparent about anything that happens in Fullerton.

When it comes to the resolution and the municipal code there doesn’t seem to be any part of Fullerton where the rules are applied logically, consistently or openly. None of this should come as a shock to anybody paying attention.