I’m sure not complaining about it, I’m hardly even wondering why.

During Jen’s 8-year career driving Fullerton to the precipice of insolvency and immanent infrastructure collapse, she made it pretty clear that she was in it for whatever she could get out of it for herself, her campaign supporters and her boss, lobbyist Curt Pringle. Her last, desperate flail at influence peddling occurred in last fall’s election when her puppet candidate, Andrew Cho, dredged from the obscure depths of anonymity, was defeated by Fred Jung,

Now there are only two candidates willing to be “influenced” Fitzgerald: Jesus Quirk Silva and Ahmad Zahra. And the latter may soon have his legal troubles advertised for his constituents to peruse.

Maybe she figures her work here is done.

When FFFF first introduced Andrew Cho to the Friends we noted that his list  of “endorsers” was a veritable rogues’ gallery of political crooks, swindlers and liars. And now the collection is complete:

It is right and proper that the Cho, the hapless stooge of outgoing Mayor-for-Hire Jennifer Fitzgerald should have the backing of “Democrat” Doug “Bud” Chaffee, the senile and incompetent clown who let Fullerton go to Hell even as he bought himself a job at the County. It’s also perfectly predictable. Lobbyist Curt Pringle, who employs Fitzgerald is a big fundraiser for Chaffee, obviously expecting favors in return. This is one of them.

And let’s never forget Chaffee’s better half Paulette Marshall, whose well-documented political hijinks and actual crimes, must have been well-known to hubby.

But the recommendation that bankruptcy lawyer Cho’s record in “financial recovery” is somehow an asset should cause even the dimmest wit to ponder Fullerton’s future with Cho on the council dais. 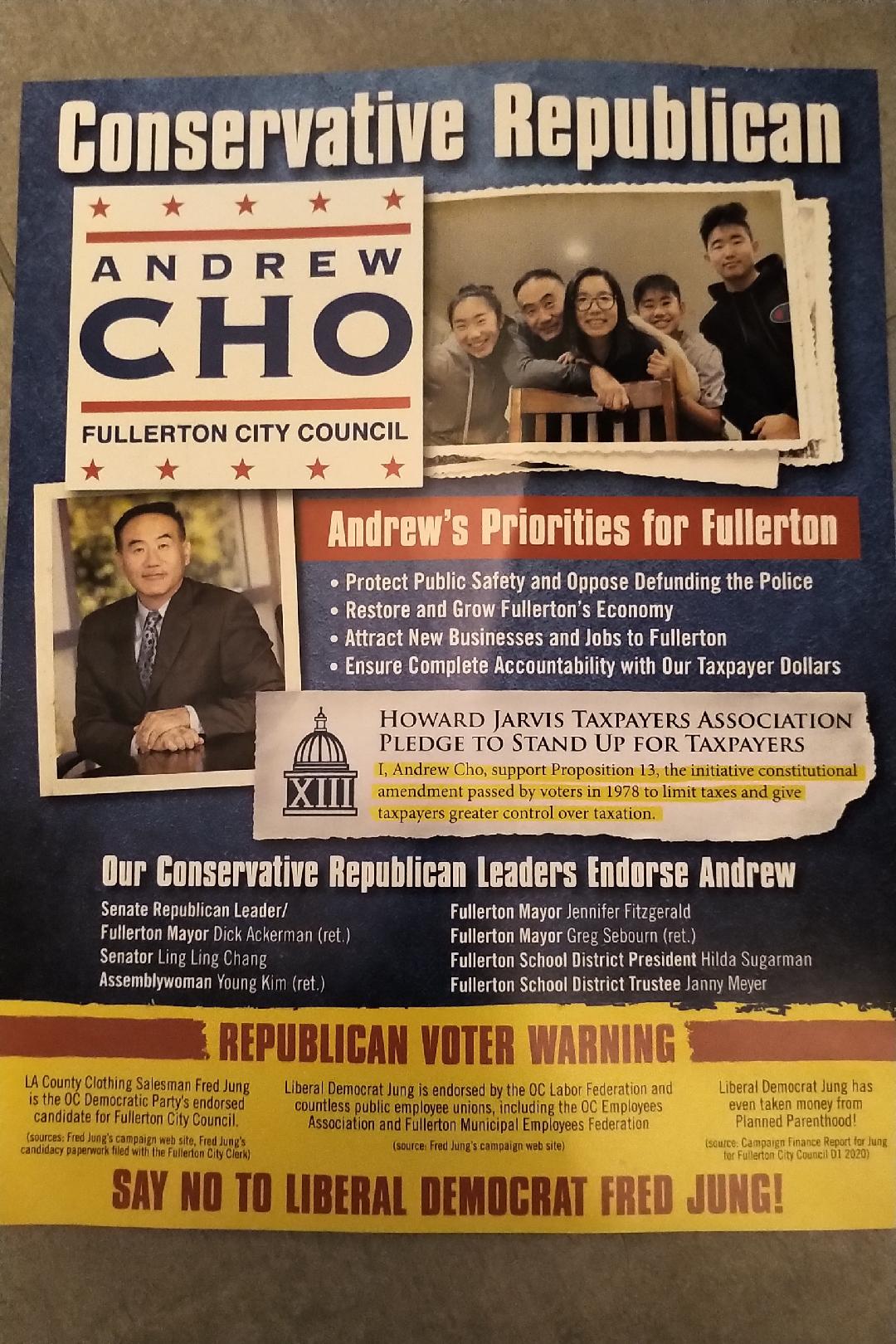 END_OF_DOCUMENT_TOKEN_TO_BE_REPLACED
Posted onOctober 6, 2020About Us
by The Fish24 Comments on Two BK Chuck Sargeant

Driving around Fullerton’s District 2 the other day, I noticed a certain District 2 City Council candidate’s signs screwed directly into trees. Having never seen anyone do something like that and still mourning the loss of Sappy McTree to drunken wannabe bureaucrats, I had to figure out who Chuck Sargeant is and what kind of person would go around screwing Fullerton’s trees in such a way? 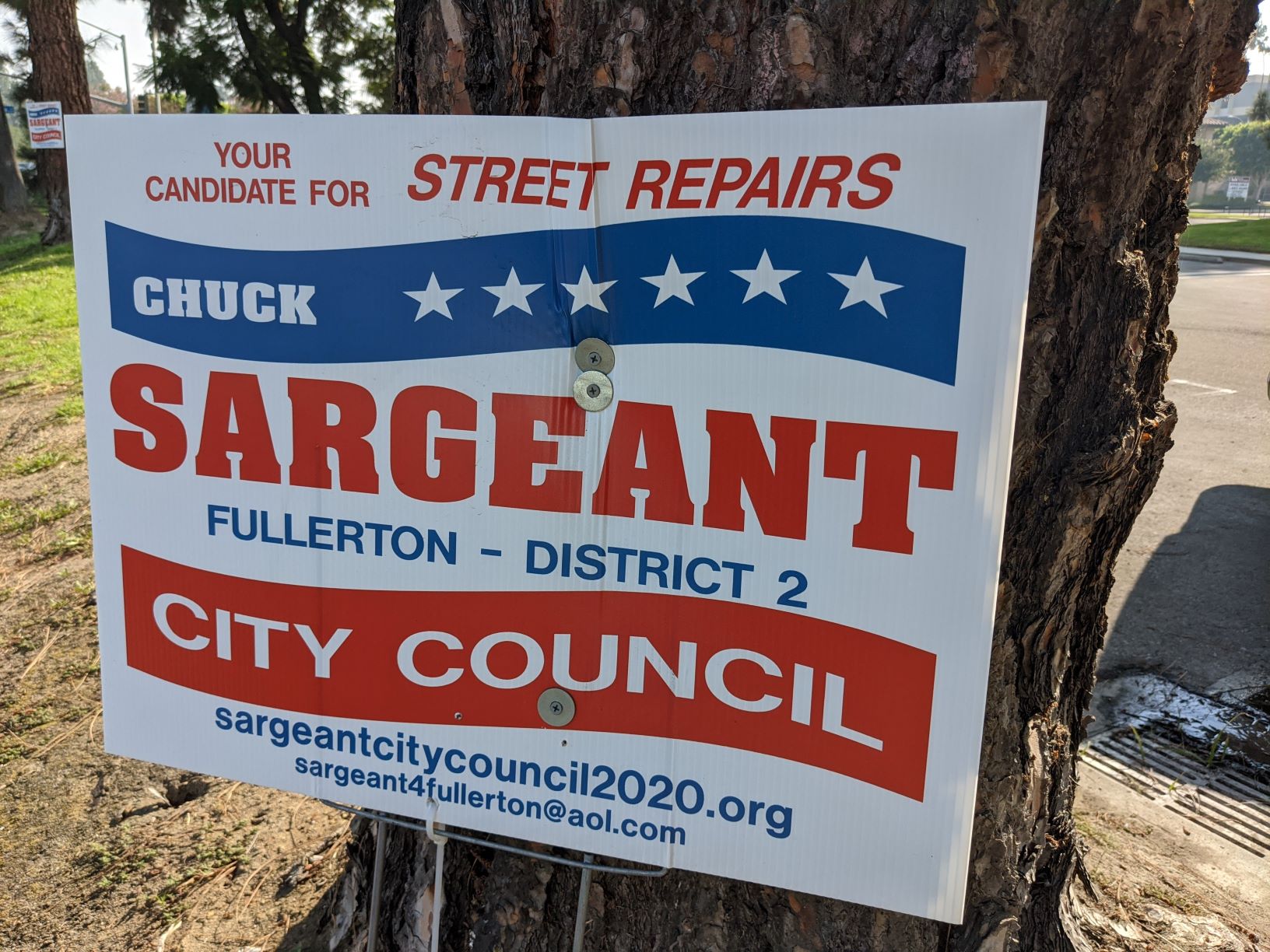 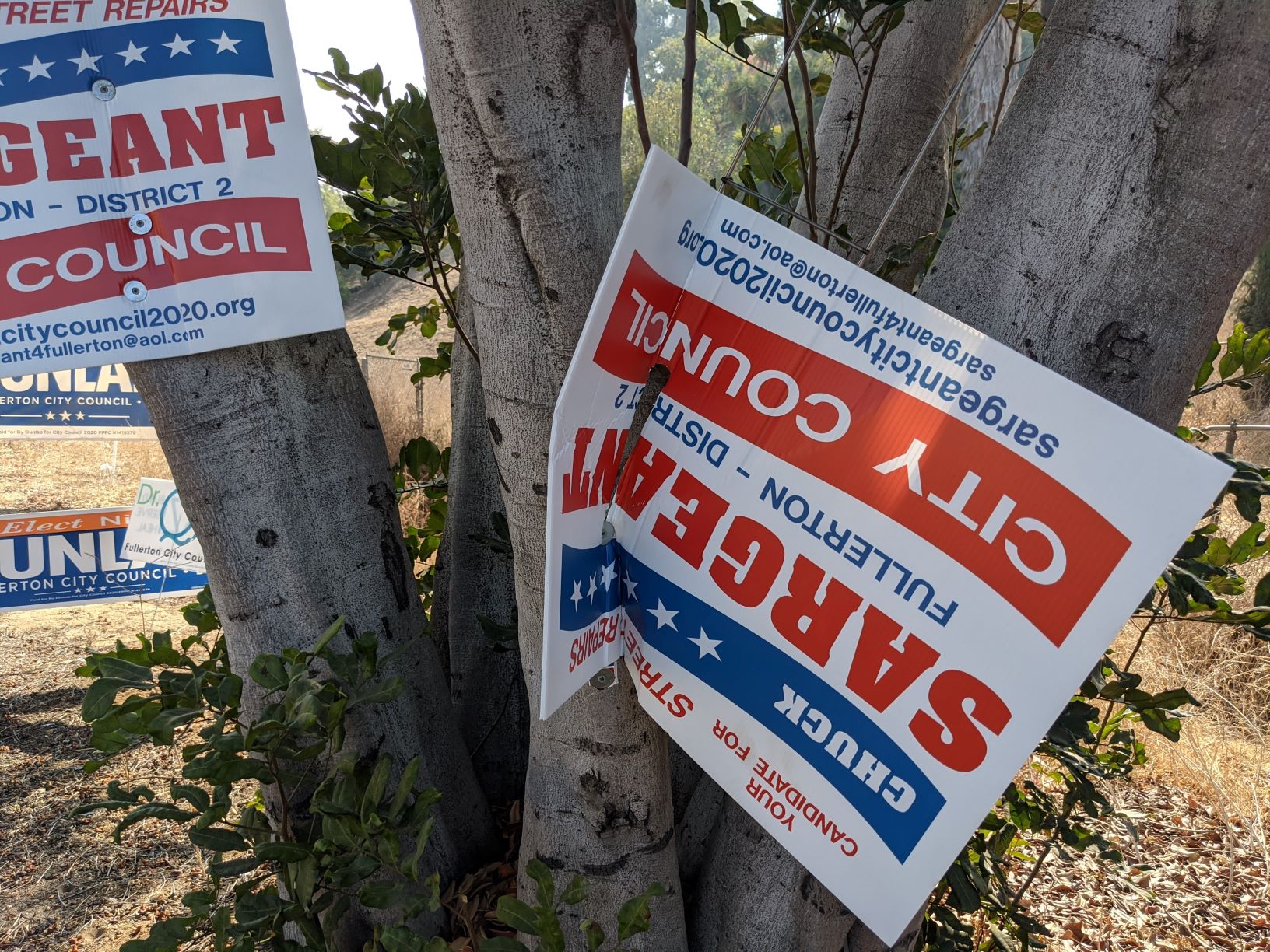 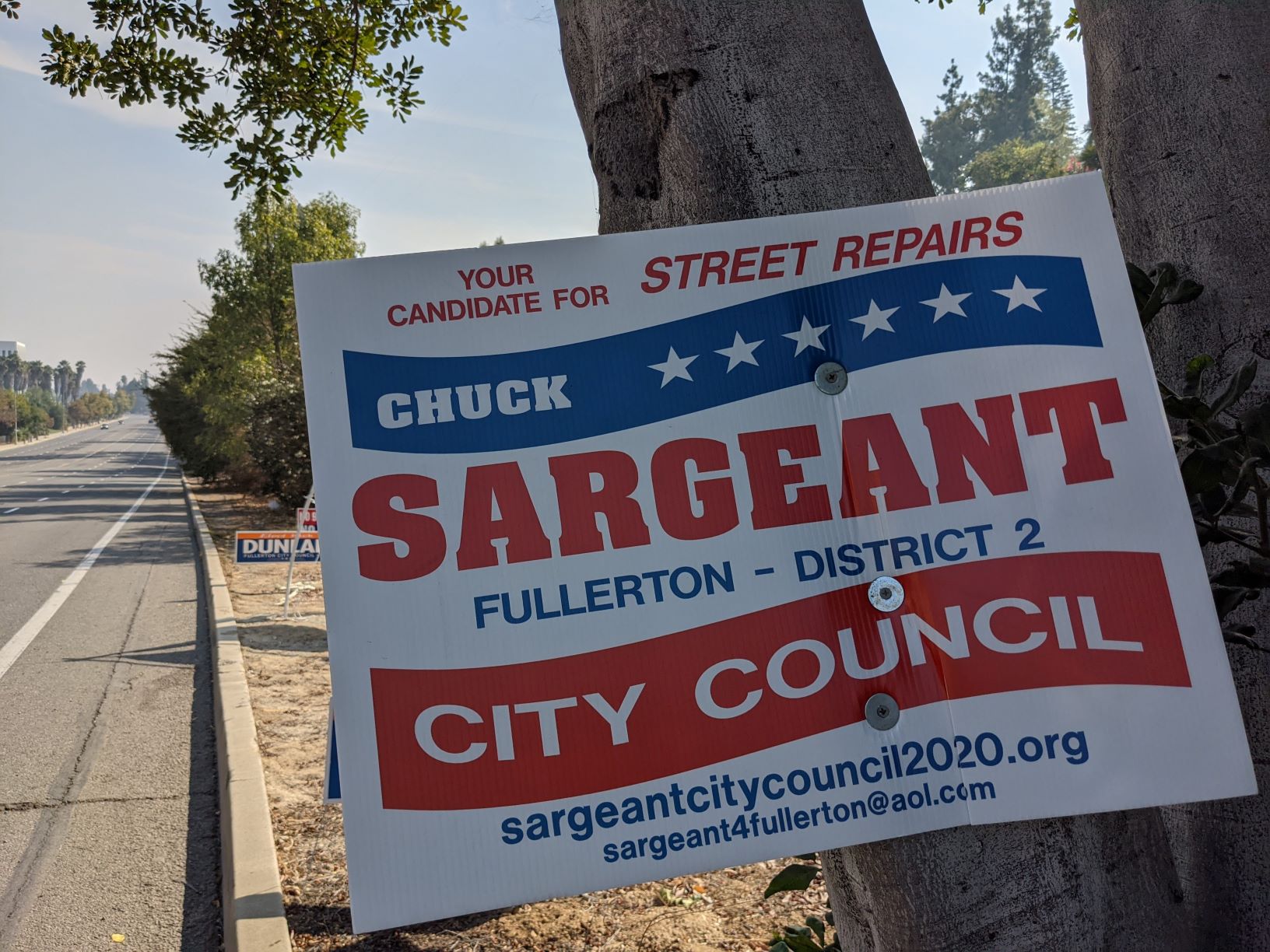 Yes, Fullerton has a long history of choosing foxes to guard the hen house that is our city budget. Yes, it’s so bad that they’re trying to raise our taxes. But even then, I was a tad surprised to find that District 2 candidate Chuck Sargeant had filed for Chapter 7 bankruptcy in 1992.

And he didn’t pay taxes for 3 years and the state placed 10 liens against his property.

And then he filed for Chapter 7 bankruptcy again in 2012 (that bankruptcy didn’t clear until 2016, the same year he was running for council last time).

And I wouldn’t have even looked into him had Gnarly Charlie not gone and screwed his freaking signs into trees all over Harbor Blvd.

The last thing Fullerton needs is another council member like Ole Chuckles who spent money he didn’t have and screwed creditors to the tune of tens of thousands of dollars. So there it is… Fullerton District 2 Council candidate Two BK Chuck. 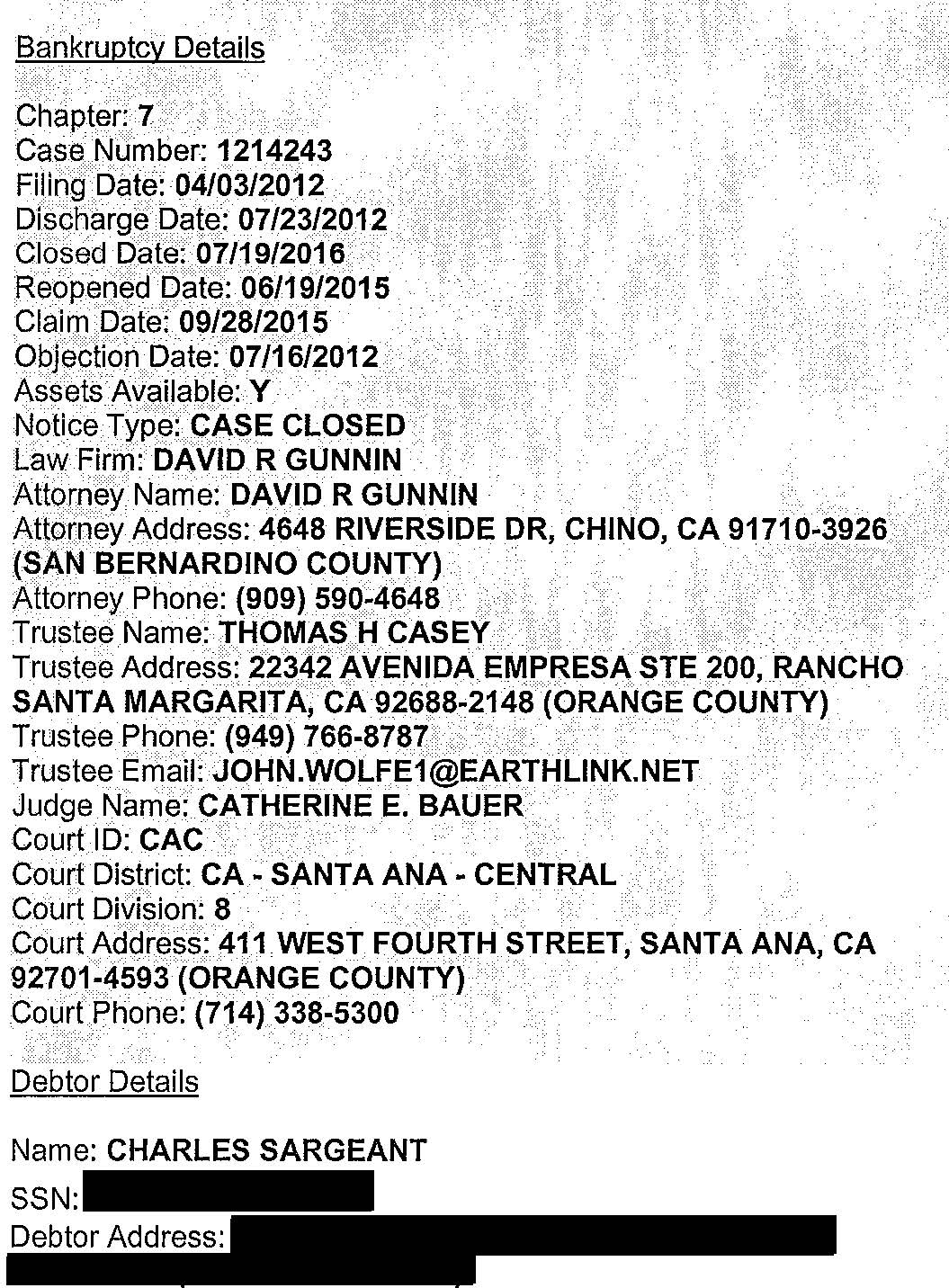 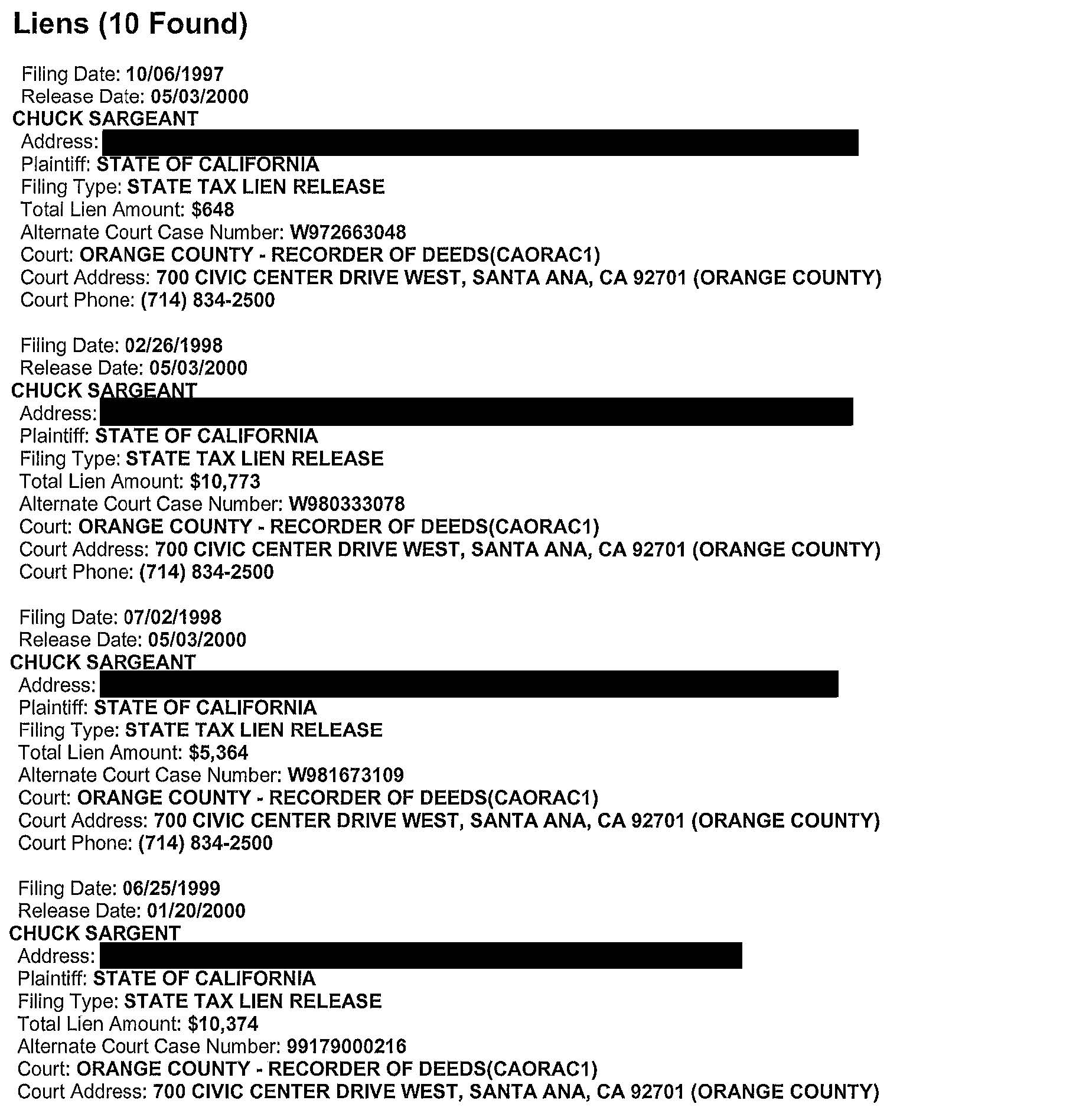 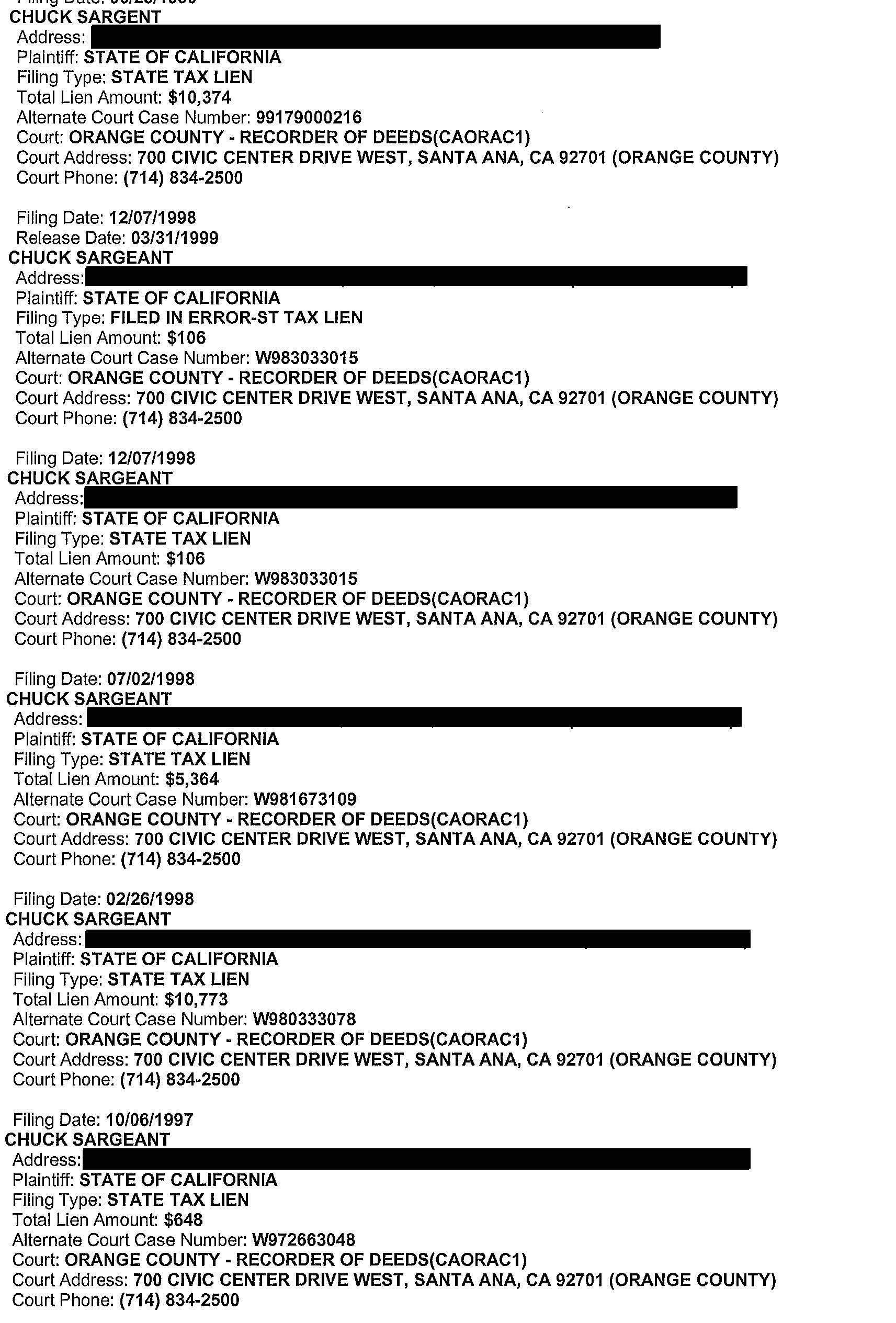 Back on August 18th, out esteemed City Council began the process of declaring a strip of property along Bastanchury Road to be “surplus.”

The vote was 4-1 with Bruce Whitaker in opposition.

The obvious purpose of this strategy is to to sell the property to an affordable housing developer so that the politicians can feel good about themselves and maybe raise some fundraising dough. For Mayor Jennifer Fitzgerald this most likely means a lobbying opportunity after December when her presence on the council will mercifully come to an end. Why? Because developer selection and rezoning can be budged along by Pringle and Associates on whose street corner Fitzgerald plies her trade.

But not everybody is happy and there is an election in a month.

The locals on the hills behind the proposed development naturally object, as do environmentally-minded people who want the site preserved as opens space. The locals have even come up with a website and are advertising their displeasure with the City Council.

And naturally this has become a sudden election year issue for the District 1 council seat. Fred Jung has already made his position known that he prefers the open space option. On the other hand, his opponent, Andrew Cho, was hand-picked by Fitzgerald to have a reliable vote on the council. But not only is Fitzgerald gone this fall, but so is her pal Jan Flory which means that after the election there could be three potential votes to save this site as open space.

The Council passed this item with the usual “this is only the first step in the process” bullshit that begins the process of cloaking another hot mess in the mantle of inevitability. For the folk of District 1, however, the story may take a different turn than the City house-acrats and politicians are hoping for.

END_OF_DOCUMENT_TOKEN_TO_BE_REPLACED
Posted onSeptember 21, 2020About Us
by Sean Paden43 Comments on Looking Out for the Little Guy (who makes more than $200,000 a year)

A few weeks ago the Fullerton Rag posted City Council-member Ahmad Zahra’s comments to the Black Lives Matter protest in Fullerton on June 6. It is interesting snapshot on an elected Democrat’s efforts to appease the party activists while keeping that sweet PE union cash flowing. It went about as well as you would expect (fast forward to 2:35 to hear the crowd turn):

The latest attempt to thread that needle comes courtesy of Faisal Qazi, a first time candidate who appears to be the Democrats de facto candidate for the Second District City Council race.  His facebook page currently advertises a pro-BLM tilt, which one would presume would mean he opposes the longstanding practice of covering up for problem officers. However, this (since deleted) post shows a pretty strong blind spot where public employees in general are concerned, which should call that assumption into question:

Apologies to longtime readers (for whom this will sound like a broken record) but, according to Transparent California, there are almost 200 City employees making at least $100,000 per year. And that is not counting benefits (the $100,000 club has over 600 members in our fair City when benefits are included). On what universe would this be considered “already low wages?”

Oh, and for extra irony, try guess which department most of the public employees in the $100,000+ club belong to?

The problem in our local government, as friend of the blog Dave Zenger put it recently, is that too many people believe “the myth that (civil servants) are underpaid and hence deserve civil service pensions and protections. That may have been more or less true until the employees unionized, but it hasn’t been true for 50 years.”

And the result? Generations of “fiscal conservatives” on the City Council who voted for every pay increase that crossed their desk, followed, apparently, by generations of BLM supporters with a see-no-evil approach in their own backyard to the core issue that gave rise to the movement in the first place. And who will probably also vote for every pay increase that crosses their desk. This is why we can’t have nice things.

The good government boys and girls over at FTR and their padrone, Tony Bushala, have jumped into the 2020 District 1 council campaign with their standard attack sign with the inevitable Barfman.

They have conflated candidate Andrew Cho with the pet project of his boss, Jennifer Fitzgerald – Measure S. Nobody seems to know where the guy stands on the proposed tax increase, but some reliable sources have heard him support it. And since it is the brain child of Fitzgerald (who hand-picked Cho out of a line up of anonymous Korean-Americans residents) we may assume, that he is for it.

Anyhow the sign seems to go after two birds with the same stone and that’s pretty smart.