Add Another Item for the DOJ and State Attorneys to Investigate

The Joe Felz DUI case just took another wide turn and this time not over a tree. New allegations have arisen within the Orange County District Attorney’s Office:

One of the allegations, listed only by [investigator Abraham] Santos, involves an election night car crash by Fullerton’s then City Manager Joe Felz on Nov. 9, 2016. A Fullerton police officer, who responded to the scene, notified the city’s then Police Chief Dan Hughes, who contacted a police sergeant and allegedly told him to drive Felz home instead of arresting him.

Santos’ investigation later concluded that Hughes was calling in a favor allegedly owed by a sergeant. That sergeant, according to Santos’ claim, had once been caught having sex in a police car but was never disciplined.

“Chief Hughes covered up the misconduct by his sergeant and, when he needed him in the Joe Felz DUI/attempted hit-and-run case, (the sergeant) repaid the favor to Chief Hughes,” said the claim.

Santos’ subsequent investigation of the incident concluded that Hughes “criminally obstructed justice.” But the county never filed a charge against Hughes. Santos, in his claim, said Assistant District Attorney Ibrahim Baytieh told him, “I am friends with Chief Hughes and we are only going to be investigating the DUI and nothing else.”

Let us repeat part of that for emphasis.

This isn’t your run of the mill water-cooler talk either as it was disclosed in an official complaint with the OCDA’s office. Pertinent Screenshots as follows: 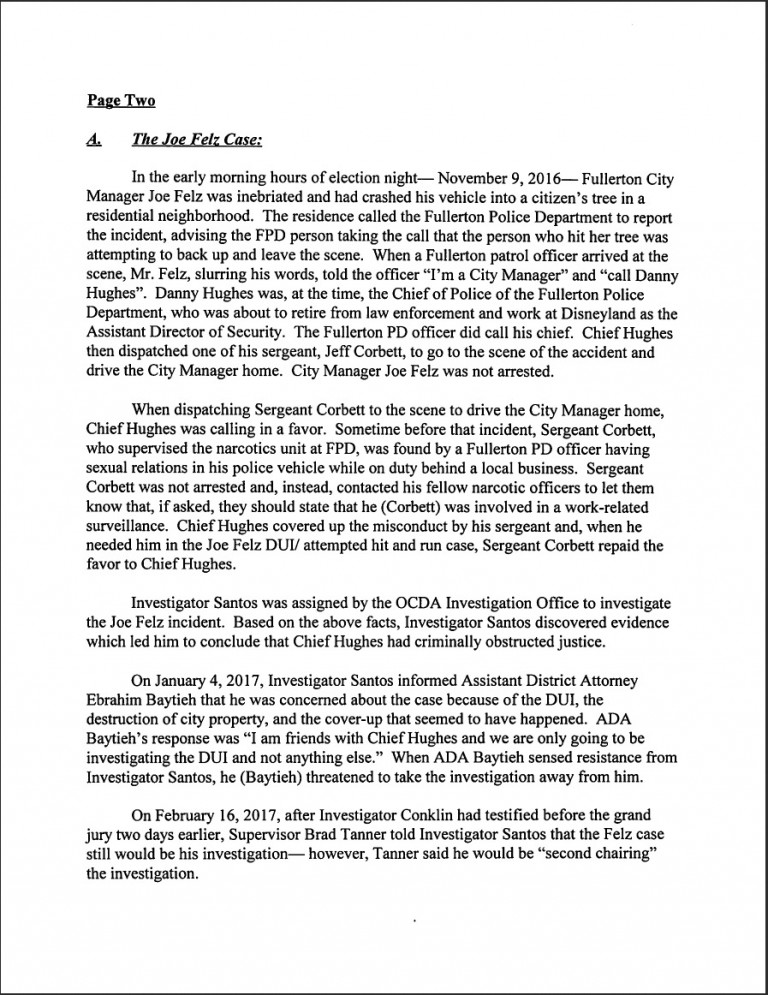 This seems to be par for the course for the OCDA being that Supervisor Todd Spitzer has asked the US Department of Justice to take over their operations owing to an ongoing Jail Snitch scandal amogst other trying issues. Things have gotten pretty bad at the OCDA. So much so that the U.S. Dept. of Justice, the California Attorney General & the Orange County Grand Jury are all separately investigating the OCDA for “systemic” cheating in the jail snitch program. While speculative it wouldn’t be surprising for this Felz DUI Cover-up case to be sucked into the investigations.

We in Fullerton were told time and again that Hughes reformed the department. We were told that he was the man we needed for the job. If these allegations are true it means that not only did he cover-up previous misconduct regarding officer Corbett but he then used that previous cover-up to bury another more egregious case. One cannot have a reformed department if the man in charge is not only participating in coverups but using them as leverage for later ones.

If the rot at FPD started with the head down did it permeate other parts of our city as well? If an Assistant District Attorney refused to look into Hughes owing to a personal friendship did others likewise turn a blind eye to corruption and criminal wrongdoings? Considering how often our own Jennifer Fitzgerald proclaimed her friendship to both Hughes and Felz one must wonder how much misconduct she was aware of and if she was aware did she help cover anything up while she’s been on council?

This further begs the question of how Disney feels about having a potential felon in Fantasyland?