According to The Fullerton Observer, North Orange County Community College District trustee, Molly McClanahan has pulled the plug on her career as an alleged overseer of the bureaucracy at the local junior colleges. Her seat will remain vacant until the November election, a rather telling sign of how critical the job is.

Of course Molly didn’t get on the board via an election like her successor will. No she got this job 25 years ago as a boohoo consolation prize for being recalled from the city council by the people of Fullerton in June, 1994. The cause? A completely unnecessary utility tax that was foisted on us to save the city from imminent destruction. Like her two compatriots, Don Bankhead and Buck Catlin she refused to leave the council until a judge forced the City to hold a replacement election. Same arrogance as ever, yesterday, today, tomorrow.

On the council Good Old Molly never veered from a completely predictable path. Always handy with a bubble-headed cliché, she was a constant supporter of Redevelopment boondoggles and expansions, and any other nonsense put in front of her by “staff.” Her supporters always bragged that she “did her homework.” Yet when it came time to take the test there was never anything that remotely smacked of intelligence or the willingness to vote alone, if necessary.

Likewise, McClanahan’s career trajectory over the past two and a half decades on the JC board has not deviated a bit in its pathetic parabola: cover for bureaucrats, never demand accountability from anyone, just do what you’re told. She was caught being wined and dined by bond salesmen who placed the massive bond on the ballot in 2016 under the phony guise of helping veterans, and that pretty much sums up her legacy.

I don’t know about you humans, but I always find it amusing when a politician tries to look good on campaign material, but ends up really looking funny.

My former neighbor, Paulette Marshall is pretending to be a school teacher to run for County School Board. Actually she was just a typical bad local lawyer for years. In 2018 she created a phony address to run for your city council and then got busted, prosecuted, and eventually pleaded guilty to trespassing and theft charges. You would think that would be an instant disqualifier for future elective office, but in a county where her senile and crime abetting husband Doug “Bud” Chaffee can get elected County Supervisor, anything is possible if you blow enough of your kid’s inheritance. Of course spending dough doesn’t equate to success.

Here’s a piece Mrs. Chaffee sent out. Humans with opposable thumbs cropped it to get rid of the stupid, misleading verbiage.

I couldn’t think of what this reminded me of at first. Then I did”

In a news bulletin issued today by County Supervisor Doug “Bud” Chaffee, six new states have been added to the The United States of America.

“In the new flag we see added representation for all of our wonderful citizens in six whole new States,” said Supervisor Chaffee from the roof of Building 10 at the Hall of Administration. All colors and creeds are now in there, somewhere.”

“We are finally seeing Puerto Rico recognized, as is Guam, the Marshall Islands, the Philippines, the Canal Zone, Key West, and Long Island” Chaffee added. “All are welcome under my Big Umbrella.”

Here’s some fun stuff from our local amateur news effort, The Fullerton Observer, from the latest installment.

First, one of the yellowing observers writes in to compliment the production of reliable news and to note that “local” news is the best kind. The editor Sharon “ED” Kennedy goes on to describe other news sources that are less reliable than her own. 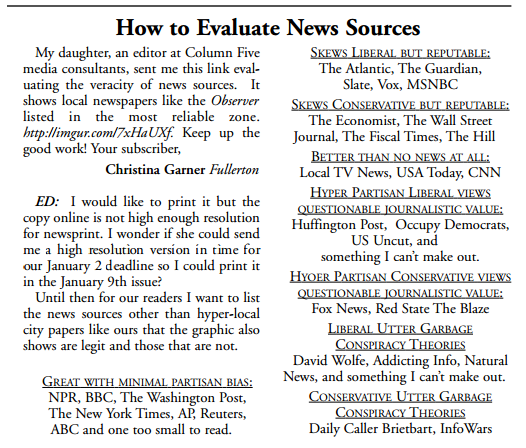 You’ll notice that the subscriber, a Ms. Christina Garner, displays the classic muddled logical error of attributing the characteristics of some members of a class of objects, to all of them. A tiger is a mammal. A tiger has stripes. Mammals have stripes. You get the idea.

Kennedy soldiers on in her solicitude to making sure we don’t succumb to the lure of “fake news.”

And  yet, hilariously, and indicative that we have now entered an irony-free zone, on the facing page is yet another of The Observer’s funny fact dodging articles about Joe Felz’s Wild Ride and subsequent quitting of his post. The last one didn’t even mention Felz until the third paragraph and never mentioned his first name at all. Here’s the latest: 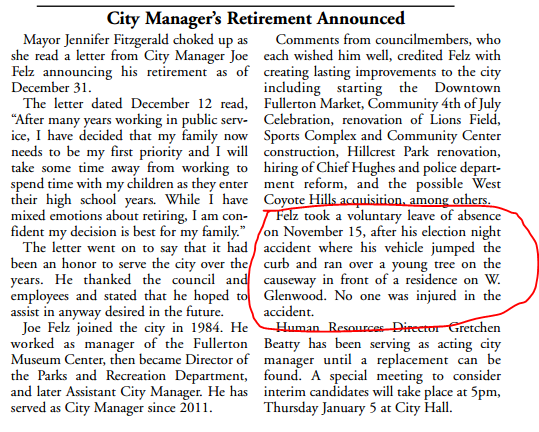 Here it takes six paragraphs of nonsense to get around to the real reason Felz was forced to quit: he was drinking the night of November 8th/9th, drove off Glenwood Avenue, killed a tree, and tried to drive away from the scene. But of course these facts appear almost disembodied from the rest of the drivel so that any connection drawn between these events will not be the fault of Sharon Kennedy. The reason for this weird version is clear enough given The Observer’s penchant for idolizing of public employees no matter what they do: it would make them look bad.

Now I have no idea whether any of the Observer’s loyal followers actually give a rat’s ass about reading real news; and maybe the reason they like the Observer is because it helps reassure them of their own little weltanschauung. But really? In the “most reliable zone?” I don’t think so.

END_OF_DOCUMENT_TOKEN_TO_BE_REPLACED
Posted onDecember 8, 2016December 7, 2016CSUF
by The Worm14 Comments on A Bitter Benefactor

Here’s something funny. CSUF benefactor and Mihaylo business school namesake Steven Mihaylo got into a Twitter tussle with students over college debt and the lack of respect for their elders. Mihaylo ultimately threatened to redirect future donations to CSUF as a result of profane provocations from students. Daily Titan has the story. 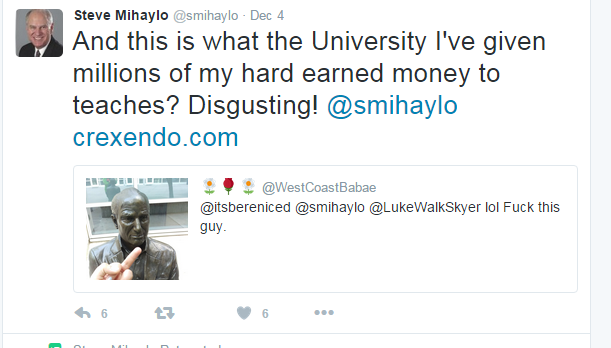 Of course, there’s nothing new about an old guy mocking the generations that came after him. Particularly an old guy with a Trump hard-on and his own statue. But college students (of any generation) are not really known for respecting the opinions of their elders (or their bronze busts.) Mihaylo’s indignation and demand for reverence from angsty college students shows that the guy might be out of touch with his own cause.

Said by Lorri, of course.

And naturally the local media and a few compliant bloggers are publicizing the fact that Anaheim Councilwoman Lorri Galloway’s charity the “Eli Home” is facing tough times.

This is hard to believe given the massive support offered the Eli Home by us federal taxpayers to the whopping tune of $500,000 a year, not counting all the local support given to Galloway by genuine philanthropists and of course by people who do business in Anaheim.

Of course we know a little bit more about Lorraine’s track record from her 2010 scampaign to be our county supervisor. It’s not pretty.

We know, among other charming things, that she and her husband scammed his aunt out of her house in Salinas just before they popped up in OC praising the Lord for their good fortune in investments. And we know the family has always been on the Eli Home payroll in one fashion or another.

Then there were revelations of more financial embarrassments that led to quick exits, stage left and more re-appearances, stage right.

And through it all the fake residences, jewelry, manicures, baby-talk and expensive cut and dyes remained.

The really ironic thing is that Lorri is now bemoaning that the Eli Home house in Anaheim Hills – yes, the one built without permits – faces “closure.” Some of the neighbors over there have claimed over the years that that house was never actually open in the first place; that it was just a Potemkin village, an empty abode, a prop to gin up financial support for the family business.

It just gets worse. A premature discharge.

Fortunately the injured party is doing fine and no lawsuits are expected.

END_OF_DOCUMENT_TOKEN_TO_BE_REPLACED
Posted onOctober 29, 2012October 29, 2012Boohooism
by The Fullerton Shadow84 Comments on Watch Out For The Tricks
http://www.youtube.com/watch?v=egkl8DHvbpQ

And no, Ms. Executive Director, your monster is not asleep.

END_OF_DOCUMENT_TOKEN_TO_BE_REPLACED
Posted onOctober 26, 2012Chronic Failure
by The Fullerton Harpoon94 Comments on Have They Gone Too Far?

You would think that even a band of rogue cops with the recent history of malfeasance such as the FPOA brethren would recognize that publishing a wanted poster of your political opponents is crossing a line.

Well, I guess not. When you are willing to defend killers, robbers, pickpockets, liars, perjurers, incompetents of all kinds, property room thieves, sex perverts, and who knows what else, you’ll defend anything.

END_OF_DOCUMENT_TOKEN_TO_BE_REPLACED
Posted onOctober 23, 2012October 25, 2012About Us
by The Fullerton Shadow321 Comments on It’s A Dirty Job…. 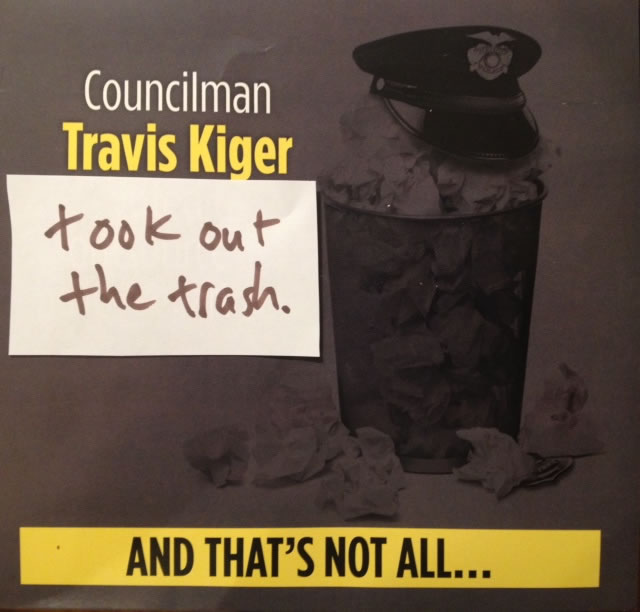