City Manager Ken Domer really is just another petty bureaucrat who doesn’t want people to know the truth. When our own Joshua Ferguson put in a record’s request asking for emails about this very blog and his own self, the city worked to limit the scope but not before throwing some shade his way.

Either Ken Domer is ignorant regarding how boolean searches work or he’s just being petty and mocking Joshua’s attempt at thoroughness.

“Ivy, I know Josh, or Joshua, or Josh Ferguson, of Joshua Ferguson, stated no timeframe –”

I guess if you assume your messages will never be made public you’re free to be arrogant and condescending about those members of the public you don’t favor.

The city is threatening to sue us… again.

Let’s have a look at the newest letter from the city (PDF HERE) before getting into why this is happening:

Any and all records obtained from the City of Fullerton’s Dropbox account (https://cityoffullerton.com/outbox) that were not directly provided by the City to Joshua Ferguson or any of FFFF’s agents or associates through an emailed link, including, but not limited to, records contained in a folder named “prl 919 – Josh Ferguson.”

Therefore, pursuant to Govemmentt Code section 6204, within twenty (20) calendar days of receiving this notice, the owner(s) and/or operator(s) of the Friends for Fullerton’s Future blog are hereby directed to either:

We further note that the FFFF blog has posted many of the confidential City documents after receipt of our office’s June 13, 2019 cease-and-desist email. (A copy of that email is enclosed herein). Many, if not all, of the confidential City records posted to the FFFF blog are explicitly exempted from disclosure under the California Public Records Act, would not have been provided to Mr. Ferguson or FFFF agents or associates in response to a Public Records Act request, and could only have been obtained without the City’s express authorization. Such records posted to the FFFF blog are confidential and exempt from disclosure pursuant to the following authorities:

As such, unless FFFF complies with the demands set forth in the City’s June 13, 2019 cease and desist letter within 24 hours, the City will have no choice but to pursue all criminal and civil remedies available to it under the law. 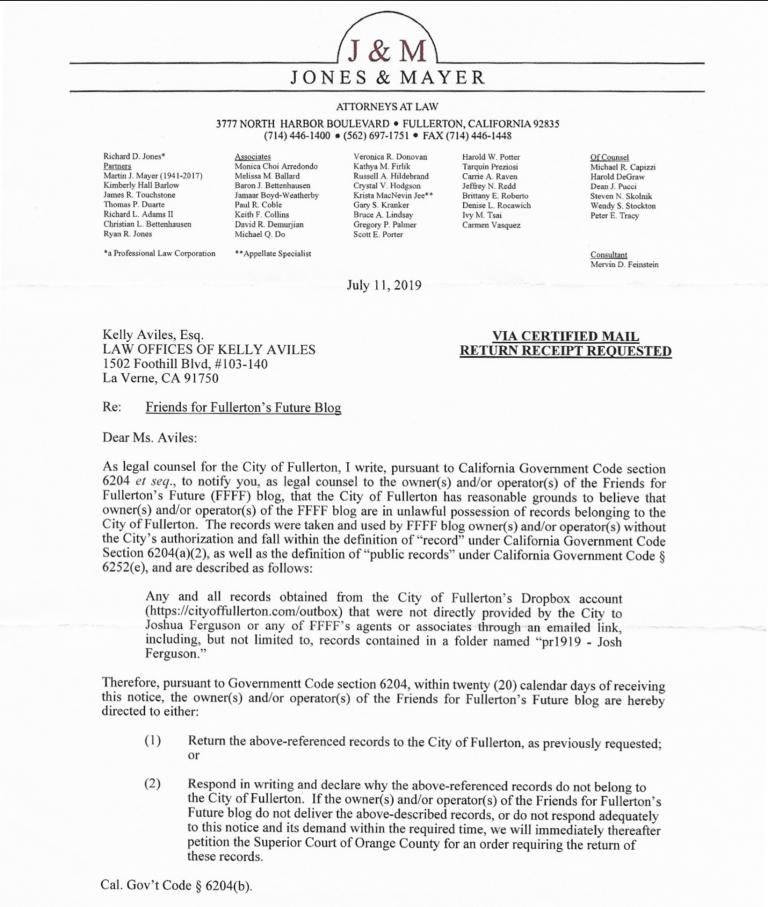 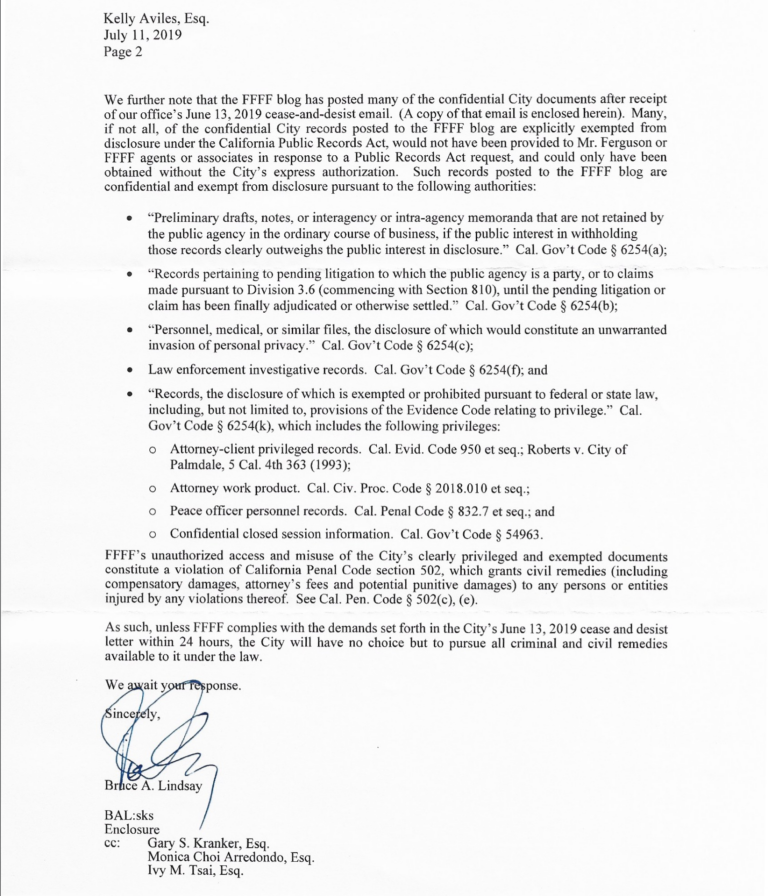 What is this all about?

For those in the cheap seats we at Friends For Fullerton’s Future broke news story after new story by publishing documents that the city didn’t want disclosed and tying those documents to local events and items of public interest. Those stories include, but are not limited to:

The city settling with a police officer to sidestep disclosure laws regarding police misconduct.

The results of a Body Worn Camera audit for a School Resource Police Officer who had, what appears to be, child pornography on his (or perhaps department issued) cell phone.

An insurance payout for an accident that destroyed a city vehicle.

Likely fraud by city employees costing over $50,000 worth of waste/theft.

Massive Police Overtime abuse that went on for 6 years.

Evidence that the city is lying and violating the California Public Records Act.

In short, they’re mad that we’re doing what journalists are supposed to do daily. We’re using information to piece together stories in order to inform the public.

These latest threats are meant to serve as a chilling effect to silence people who would dare impugn the character of Fullerton with facts the city wants obscured. I’m hesitant to head to city hall or go to council meetings lately knowing that the city is targeting me personally for the use of free speech on this news site / blog. And that’s really the point of these types of threats – to silence dissenters.

How will we respond to this latest salvo by the city? I reckon we’ll confer with our legal counsel and act accordingly. 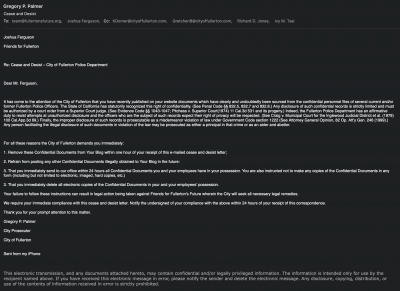