We found an interesting aside to the Officer Brian Hagopian file that was released under SB1421. The file includes, as part of the investigation, a memo written from “Sergeart [Redacted]” talking about his wife, Officer [Redacted]. 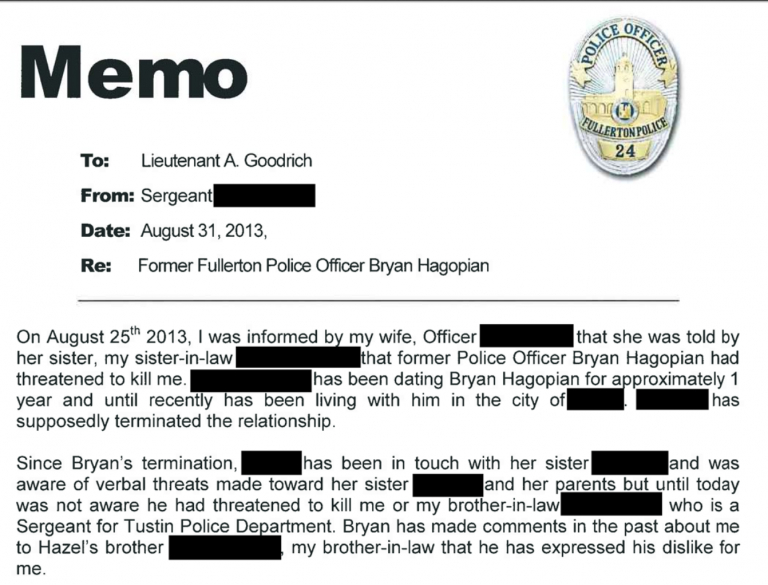 We know from our previous writing on Officer Hagopian regarding his (still?) outstanding arrest warrant in Riverside county that he was in a relationship with one Miss Perez, the sister of one Officer Hazel (Perez) Rios.

Officer Hazel Rios, of the Patrol Division, is the wife of Lieutenant Tony Rios, of the Operation Division-Patrol.

I know police work can often be a family business but how is it not a conflict of interest having one’s spouse below you in the chain of command?

Also, why is he writing a letter about an Officer Hagopian, who his sister-in-law is dating regarding text messages his wife was told about by her sister? As an officer shouldn’t Hazel Rios be the one writing this memo to remove a degree of separation at the very least?

What happens if Officer Rios does something out of policy? Does her Lieutenant Husband get a say? Or are we to believe that his co-workers will be tough and fair on their colleagues wife? What happens if Lieutenant Rios does something wrong? Do we expect his wife to report him? We have a hard enough time getting officers to penetrate the Blue Wall of Silence, let alone to do so against a spouse.

We have so many questions and predictably can expect zero answers in return.

16 Replies to “More Nepotism at the Fullerton Police Department”