This blog revealed the other day that according to former Fullerton PD Sergeant Corbett, he essentially let former City Manager Joe Felz skate on DUI/Hit-and-Run charges because the former Police Chief Dan Hughes told him to just run a “physical assessment.“

Did Corbett think that Hughes would cover for him and have his back? We have two pieces of information that look like they lend themselves to that assumption.

The first is a photo that was entered into the record during another officer’s termination investigation. It was photographed inside the locker an officer’s locker at FPD: 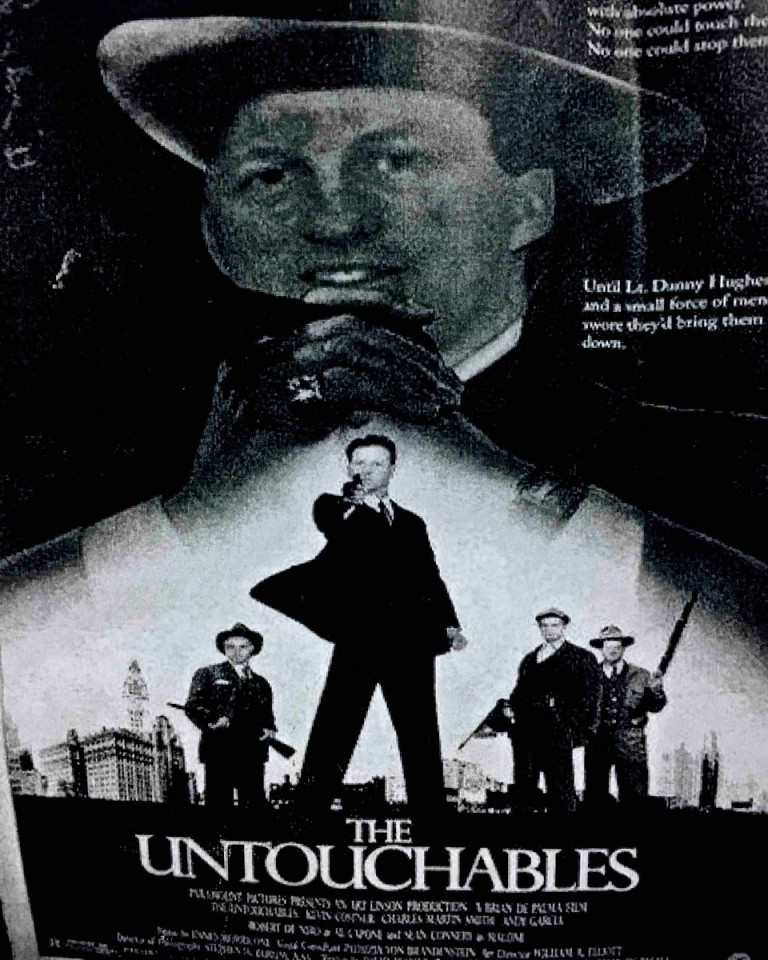 This photo appears to be a photoshopped poster for the 1987 movie “The Untouchables” with Dan Hughes’ face where Al Capone’s is on the original poster.

The other faces on the poster are said to be those of Sgt. Gharah, Sgt. Corbett, Sgt. Radus & Sgt. Petropulos.

To be fair, this poster of “The Untouchables” doesn’t mean these men thought they were untouchable and that they’d cover for one-another, but it certainly sets a questionable tone in an environment where ethics and accountability should be paramount.

The question the poster forces us to ask is if any of these men thought they were untouchable and that leads us to our next bit of information.

There has long been a rumor floating around Fullerton PD that Sergeant Jeffrey Corbett was involved in an incident where it was alleged he was having relations with a woman not his wife in his patrol vehicle.

It looks as if there might be more to those allegations than mere rumor and innuendo. 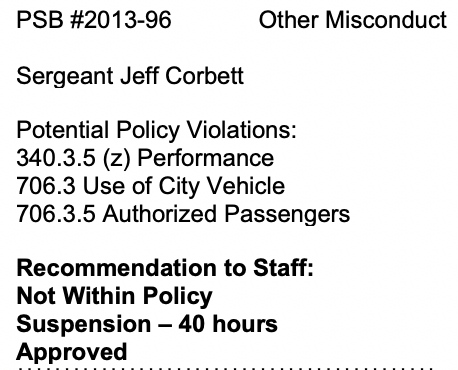 Recommendation to Staff: Not Within Policy
Suspension – 40 hours
Approved

That reference, PSB #2013-96 means that this suspension took place in 2013 and was investigated by the Professional Standards Bureau (also known as Internal Affairs).

Here are the code citations:

340.3.5 (z) Performance:
Any other on-duty or off-duty conduct which any employee knows or reasonably should know is unbecoming a member of the Department or which is contrary to good order, efficiency or morale, or which tends to reflect unfavorably upon the Department or its members.

706.3 Use of City Vehicle:
City-owned vehicles shall only be used for official business and, when approved, for commuting to allow members to respond to department-related business outside their regular work hours. Members shall not operate a City-owned vehicle at any time when impaired by drugs and/or alcohol. Any member operating a vehicle equipped with a two-way communications radio, MDC and/or a GPS device shall ensure the devices are on and set to an audible volume whenever the vehicle is in operation.

706.3.5 Authorized Passengers:
Members operating City-owned vehicles shall not permit persons other than City members or persons required to be conveyed in the performance of duty, or as otherwise authorized, to ride as a passenger in their vehicle.

We know based on this info that Corbett had somebody in his car who shouldn’t have been and he did something that was considered “unbecoming a member of the Department”. For these findings, he was given a 40 hour suspension which for all we know was a paid vacation by way of “Admin Leave”.

If Corbett and Hughes were two of the “untouchables” and in 2013 Chief Hughes allowed Corbett to walk with a slap on the wrist for alleged improprieties on duty in a patrol vehicle – what else did Corbett believe Hughes would cover for him and vice-versa?

This would seem to put the Joe Felz accident into a different light and it certainly deserves looking into but don’t expect our City Council, City Manager or District Attorney to bother.

13 Replies to “What Else Happened to Sergeant Jeff Corbett?”