Although it’s a bit late, I want to add my voice to the chorus congratulating Chris Thompson and Bruce Whitaker for their impressive elections to the Fullerton School District Board and the Fullerton City Council, respectively.

Chris Thompson out-polled every other candidate in Fullerton by a mile, despite his opponents’ support from the teachers union.

The Fullerton School District Board of Trustees has been a sinkhole for years, poulated by liberals and Ed Royce RINOs. And of course the Fullerton City Council…well the less said about that the better, but Whitaker will be running that show in no time.

I expect good things and real, effective change from both of them. I know I won’t be disappointed.

Here’s a fun video of something that occurred a couple weeks ago. The entertainment value is pretty good.

I was minding my own business while having a bowl of delicious Pho at my favorite Vietnamese restaurant – just like I have been doing for 25 years. I was approached by a man inside the restaurant claiming that I was not allowed to park in his parking lot.

I finished my Pho quickly paid my bill and went outside only to be surrounded by a gaggle of Roland Chi supporters. It turns out that this restaurant is in the same center as Roland Chi’s scampaign headquarters! Those guys sure were interested in what I had in my truck!

Once outside I was again approached my the same man who claimed to own the shopping center telling me that I could not park there because it was his parking lot.  The man in the video did actually push me, but being the sweet and gentle guy you all know and love I got in my truck and motored off. 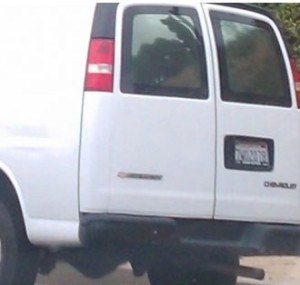 Oh, and by the way, guess what I saw parked in front of Chi Headquarters? You guessed it. The white sign theft van!

Well, not our cops. But up in San Jose they take political sign theft seriously. That’s why the police and fire unions have offered up ten grand for information leading to the capture and prosecution of some local sign stealers. You can read all about it on CNBC. Those guys up in San Jose sure do value free speech.

Our friends at the Fullerton PD have been provided with plenty of clear photographic evidence of criminal activity, free of charge. We even did all of the legwork for them: following the getaway van back to headquarters, ID’ing one of the suspects, and making contact with all of the eye-witnesses. As far as I can tell, all that’s left is a little bit of paper work and a call to the District Attorney’s office to make sure that the perps aren’t already on parole.

So three weeks have gone by and the election is now behind us. And what do we have to show for our crime-fighting efforts?

An “out of office” email from the detective working on our case.

Ouch, that hurts! Oh well, take your time officer. Any job worth doing is worth doing right.

With absentee voters generally leaning to the Republican flavor it looks like the desperate hours are about to set in for Chaffee backers, especially considering the anti-Chaffee hits unloaded by the local GOP.

Maybe the repuglican cartel that backed the over-pensioned relic McKinley can put the champagne back on ice, after all!

END_OF_DOCUMENT_TOKEN_TO_BE_REPLACED
Posted onNovember 6, 2010November 6, 2010About Us
by The Desert Rat15 Comments on Did Fullerton’s Yellowing Observers Cost Doug Chaffee the Election?

Well, technically it’s not over yet. But the trend since election day is going the wrong way for Doug Chaffee. In second place on election day and looking good for the second council opening, Chaffee has seen his slim lead shrink and then disappear in the ensuing days.

Which leads me to reflect upon Fullerton’s liberal clique, and the choices it makes. You will recall that in 2008 the Fullerton Observer endorsed the egregious Doc Heehaw, who came in ahead of dyed-in-the-wool liberal, Karen Haluza. Sure, you you remember. We wrote about it, here.

And this year? We posted a piece about how ex-Police Chief and astronomical pension-puller-downer Pat McKinley was getting support from some of Fullerton’s most prominent lefties, most notably Jan Flory and Molly McClanahan.

I visited the Fullerton Observer website and noticed that according to to its editor, second place support by the herd of Yellowing Observers was split between McKinley and Jesse la Tour! Could support for the hand-picked boy of Ed Royce and Dick Ackerman, a career cop, really have been that high among the hardest core Observers? Is Ralph Kennedy rolling over in his urn?

Of course Sharon Kennedy will blame out-of-town money used to hit Chaffee. But how many of Fullerton left-leaning tribe are starting to regret their second vote?

There are an unknown number of absentee ballots yet to be counted.

View the complete results at the Orange County Registrar’s website. The next update is scheduled for 5:00 pm tomorrow.

Well it’s about time. The Fullerton Association of Concerned Taxpayers has a blog!

In fact, FACT just released their “Last Minute Voter Guide” to help us shovel through the great heap of 2010. It’s good to see new bloggers out there in Fullerton… and it’s even better when we get to call them our Friends.

Some new mailers came in this week. In addition to fresh copies of the Roland Chi and Aaron Gregg fliers that we saw earlier, our mailboxes were stuffed with: A brutal comparison of Pat McKinley’s pension to the city of Bell’s Robert Rizzo; a stop-the-unions slate, a comparison piece on Whitaker’s behalf, a large piece of cardboard put out by the Republican Party against Chaffee, and finally, a lame comparison piece that tries to make Roland Chi look special. 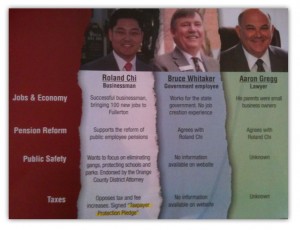 END_OF_DOCUMENT_TOKEN_TO_BE_REPLACED
Posted onOctober 30, 2010October 30, 2010About Us
by The Fullerton Harpoon32 Comments on Dereliction of Duty. The Case of the Missing Media.

The only reason FFFF sprang into existence was because the people who pretended to be professional reporters stubbornly and steadfastly refused to do their jobs.

Their jobs. The jobs to which they accrete a professional aura, a sanctimony, self-righteousness, and institutional importance that demands as a concomitant an objectivity that is exercised in the public interest.

Of course all that stuff is pure bullshit. Oh, yeah, these people want to be treated as if they actually performed a function that allows them to claim an official title: “Fourth Estate.” But in reality their work is almost never objective, never diligent, and often downright incompetent. And the closer you get to tour own community the worse it gets.

But back to FFFF. We started in the fall of 2008 because F. Richard Jones, the Braying Donkey of Raymond Hills, the man for whom no issue could not be used to spin off, dervish-like, on an insane rant, was getting a free pass. Twelve years of insulting people from the dais, weird, barnyard rantings and raving, backtracking on key issues, and generally insulting the collective intelligence of the City was ignored.

And this being Fullerton very little has changed. Consider 2010.

Does “the press” inquire into how candidate Roland Chi got rung up on criminal charges by the DA for serially ignoring health inspection failures? Or ask why he is using a 501(c)(3) to prmote his political ambitions? Or even ask this miscreant how long he has actually lived in Fullerton?

Does “the press” ask Pat McKinley about his $215,000 pension payout – far more than he ever made actually working – and his ability to make rational pension decisions?

Does “the press” ask Aaron Gregg why a guy who skipped out on $75,000 in back taxes and stiffed local creditors though bankruptcy is qualified to manage the city’s $100,000,000+ budget?

Does “the press” inquire into what appears to be Don Bankhead’s increasingly diminished capacity to participate in, let alone conduct, a public hearing?

Of course our local reporters never said boo about the carpetbaggery of Hirsute Sidho or Linda Ackerman, either. 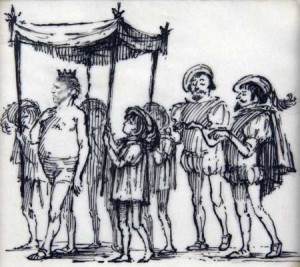 For some reason people who work for the Times and the Register would rather look the other way than admit that the emperors have no clothes on. What are they afraid of?

And so we soldier on…