A lot of people in Fullerton are wondering why council candidate Doug Chaffee permited himself to be a GOP establishment punching bag.  Did his natural inclinations lead him to avoid attacking the out-of-control public employee pension mess as embodied in his two GOP and union backed adversaries? Probably.

If so, it cost him the election.

When he finally reached down and grabbed hold of his huevos he produced this devastating comparison piece between himself and his “public safety” union-backed opponents. 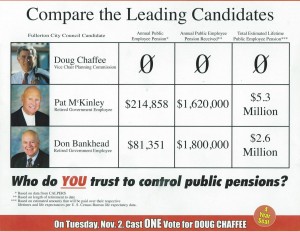 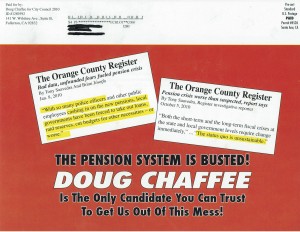 Although effective, it was too little, too late. By the time it came out absentee voting was well underway. The oblique admonition to “bullet vote” was already an effort in vain.

And the rest, as they say, is history.

12 Replies to “Chaffee’s Choke Cost Him The Election”