California Fair Political Practices Commission reports show that Fullerton City Council candidate Roland Chi contributed $1,000.00 to the Friends of Mike Carona during the first quarter of 2006.  Carona was barely re-elected to a third term in June of that year. 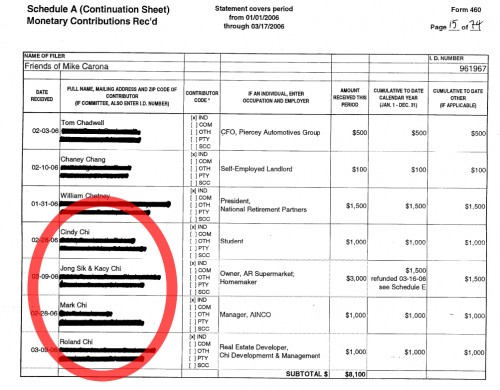 Yes, it’s a big list of contributors, but you won’t find the name of Bruce Whitaker on it.

How about a big round of applause for Roland Chi, recently of Garden Grove, for helping now convicted felon Mike Carona to squeak by with 50.9% of the vote, enough for Carona to avoid a runoff in November of that year.  Carona was indicted while in office the next year, exposing the OCSD to needless upheaval and Orange County to national ridicule.

What does this contribution say about Mr. Chi’s ability to judge character?  Do we want someone willing to fall in to line with Mike Carona on the Fullerton City Council?

The latest Mickadiet column gave Fullerton candidate Barry Levinson a chance to tell us what he really thinks of mayor Don Bankhead, and Barry did not disappoint.

See, Barry contacted the mayor when he learned that a sex offender was about to move into his neighborhood, which should have been protected by Jessica’s Law due to it’s proximity to Laguna Lake park.

The way Barry tells it, Bankhead did nothing to solve the neighborhood’s sex offender problem. Well actually, it’s worse than that. Bankhead launched a typical delay and distract strategy to avoid facing the issue, doing nothing while telling Barry that he was working on it. In Levinson’s own words:

He said Bankhead “assured us he was ‘on our side’ and would get back to us within a few days with more information.” Ten days went by, “no call from Mayor Bankhead.” When they finally talked, he says, Bankhead “had no answers for us but assured us he was still working the problem. That was the last time the mayor ever spoke to us … He did absolutely nothing. This mayor always touts his police background … What a total disappointment.”

City staff told Bankhead that Jessica’s Law had no teeth, so there was nothing that the police could do about it. Great. Responsibility absolved, right? Rather than pursue the issue by pushing for a new ordinance (a task that Levinson ended up taking on himself), Bankhead opted for the do-nothing-and-hope-Barry-the-citizen-goes-away approach.

Okay, first things first. Never heard of Roland Chi, before? There’s probably a real good reason for that. The Fullerton City Council candidate running to replace Supervisor Shawn Nelson has lived in Fullerton for less than three years. At most. Here’s a snippet from the minutes of the Garden Grove City Council that was thinking about a replacement for Janet Nguyen:

As Roland coyly puts it on his own website: During this time, he was appointed to a city planning commission and later chosen by his peers to serve as Chairman.

Well that’s pretty sneaky, not informing his readers that he never served on Fullerton’s Planning Commission. It was in another city, and less than three years ago.

But Roland’s a real climber alright, and has recently joined up in the right Fullerton Rotarian/Chamber crews. But will it make up for no real accomplishment?

Hmm. A candidate pops up out of nowhere looking for a political future.

And who does this remind you of? How about Julie Sa, who popped up like a weed in 1992, bought the election, embarrassed the City for eight years, and who finally pulled out in 2000 when it was discovered that she was actually living in Chino Hills?

Well, Hell, anybody can legally run for office in Fullerton so long as they actually live here; but has the political process become so cynical that some guy with almost no history of residency here is willing to put his name on the ballot alongside people who have served the community for years?

Just some food for thought.

Here are a few things that happened in annum nineteen hundred and ninety-eight:

And Don Bankhead began his 22-year career on the Fullerton City Council.

Twenty-two years is more than enough. It’s time to give mayor Bankhead a break.

In a unanimous vote, Orange County’s GOP endorsements Committee endorsed Bruce Whitaker  to replace Shawn Nelson in the two year seat, and Greg Sebourn for the four year seat. Pat McKinley squeaked by with a 3-2 vote, but insiders believe the $215,000 pension double dipper  won’t pass muster when it comes to a vote of the full body.

After the Orange County bankruptcy, Bruce Whitaker debated against tax proponents and authored numerous guest editorials which helped defeat a bankruptcy sales tax in 1995, resulting in more than $2.2 billion in California taxpayer savings. 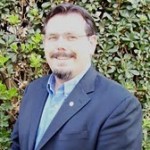 Greg Sebourn is an FFFF blogger, a professional land surveyor and an educator at Santiago Canyon College. He’s relatively new to politics, but is very aware of the evils of redevelopment and the deficiencies in our current infrastructure.

Greg has some great ideas for saving money and improving public services in our city.

The other day we challenged retired police chief and $215,000 public pensioner Pat McKinley to put some real meat behind his dubious claim that he will “work to reform public employee pensions.”

Over the weekend we discovered a letter posted to McKinley’s website purporting to declare his position on pension reform. Exciting… until we read it. The letter actually commits to nothing and woefully understates the changes necessary to even begin correcting this problem.

Let’s run through Pat’s suggestions one by one. It’s important to note that McKinley’s letter says pension reform must contain ONLY ONE of the following:

Increase the amount contributed to the plan by Employee Contributions – Necessary, but wholly insufficient. While giving taxpayers some breathing room, demanding employees pay a little bit more does nothing to address the core issue, which is the unsustainable nature of pension guarantees when combined with the power of public employee union lobby. By itself, this change only slightly delays the pain.

Increase the amount contributed to the plan by Employer Contributions – Unbelievable. Increasing employer contributions is another way of saying we should raising taxes to pay for pensions. So now it would be safe to say that Pat McKinley wants to raise your taxes, but it’s really hard to believe he would write anything this dumb. For now, we’ll just assume that he has no idea what  he’s talking about.

Slow the accrual of pension benefits by returning the formula to its previous level – Legally a change like this change can only be made for new employees, which would do nothing to address the massive unfunded liability that we have already accrued. Furthermore, it leaves the door wide open for future abuse when the unions become more powerful.

Slow the accrual of pension benefits by increasing the normal retirement age to reflect the longer life expectancies of our City employees – Same problem as above. The commitments we’ve made to current employees cannot be changed without a bankruptcy. The only lever we really have left salary and to a lesser extent, contributions. Cut salaries, raise employee contributions… or go broke.

Slow the payout of retirement benefits by lowering the Cost of Living Adjustment in retirement – The cost of living adjustment is about 2% a year. Reducing that, if it’s even legal in California, is hardly enough to sustain hundreds of public safety employee’s earning 90% of their final year’s pay for the next 30 years. And once again, there’s nothing to prevent another band of RINO’s from reinstating this benefit the next time CalPERS overstates its assets.

So what have we learned? McKinley has thrown out a bunch of half baked ideas to fool you into thinking that he wants pension reform, but it really boils down to almost nothing useful. And of course, even after writing this letter, McKinley has not committed to any pension reform.

We’ll say it again: Taxpayer-funded defined benefit plans must come to an end. The private sector learned long ago that they are completely unsustainable and also unnecessary. All new employees should be given defined contribution plans, while current employees should be made to pay as much as possible towards their own retirement, in order to mitigate the damage caused by their own unions and CalPERS through deception and poor planning.

On Saturday Ed Royce and the CRA hosted a forum for Fullerton city council candidates. I’ll spare you the agony of redundant and predictable answers to the not-so-relevant questions on illegal immigration, gun rights and abortion. As expected, all of the candidates stuck to the party line.

So let’s get down to the two major issues where the candidates diverged and that actually affect Fullerton: Public employee pensions and redevelopment abuse. Candidate positions were carefully filtered into the following matrix:

The candidates split into two camps, with Don Bankhead leading his team of big-government RINOs who’ve never met a redevelopment boondoggle that they didn’t like. That’s not really surprising, given that Bankhead and McKinley benefit from the current system through enriched government pensions.

On the other end of the spectrum, a few candidates acknowledged Fullerton’s most serious problems and promised to take action and fight taxpayer abuse.

Overall Bruce Whitaker dominated the forum with his calm, well-reasoned responses. Barry Levinson took some good shots at Bankhead, for which he was reprimanded by the moderator but applauded by this blog. Greg Sebourn also targeted the current bureaucracy with facts and figures which caused Bankhead to become visibly aggravated. Roland Chi spoke well but avoided making any strong statements. Marty Burbank and Pat McKinley both wore funny hats and stumbled through their answers. Aaron Gregg was a no-show and Tony Fonte was a colorful guy but it was hard to follow his responses.

This just came over the transom:

Fullerton, CA – The Board of Directors of the California Land Surveyors Association (CLSA), a statewide organization with 2200 members, voted unanimously to endorse Greg Sebourn for Fullerton City Council.

CLSA was established in 1966 advances the interests of the profession of Land Surveying, to maintain the highest possible standards of professional ethics and practice, to encourage uniformity of practices and procedures, and foster public faith in and understanding of Land Surveyors and their work.

CLSA represents Land Surveyors, in public or private practice, whether they are employees or proprietors.

“I have observed Greg as an effective Board member and team player with sound judgment when working through difficult issues that involve our profession,” says Aaron Smith, CLSA President. “Greg has been an active member of the Orange County Chapter, CLSA and currently serves as co-chair of the State CLSA Trig Star Program, which is an annual high school mathematics competition that acquaints high school students, career guidance counselors and high school math teachers with the use and application of trigonometry in the real world.”

Mr. Smith stresses, “Greg’s involvement has demonstrated his dedication to carrying out duties assigned to him in a professional manner.”

“I am humbled by the endorsement from the CLSA,” says Fullerton Council Candidate Greg Sebourn, “The CLSA serves with distinction of dedicated professional land surveyors that shapes our local communities by making our neighborhoods a better place to live.”

Mr. Sebourn says, “I have been tested in my profession as a Land Surveyor, who is ready to serve the people as the next Councilmember for the City of Fullerton with dignity and dedication, because the voters demand nothing less.”