Not long ago this hit piece against Doug Chaffee hit Fullerton mailboxes. 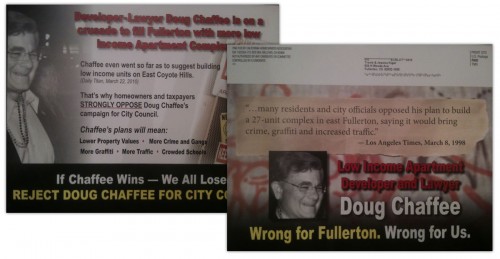 Standard crapola. But notice who sent it? California Homeowners Association? What the Hell is that? Well, let’s take a gander at who just plowed some dough into this obviously bogus outfit for the purpose of hitting Chaffee:

Whoa! That’s not our local “firefighter” union. Who is it? And why do they give a damn who is on Fullerton’s City Council? Why are they contributing to an IE hit piece in Fullerton? Fullerton’s fire crew are already backing RINOs  Bankhead and McKinley.

Hmm. Let’s reflect upon what’s going on up in Brea right now, where the “firefighters” are making a big stink about joining the Orange County Fire Authority.

What’s going on here? Is there something we should know about any deals behind the scenes?