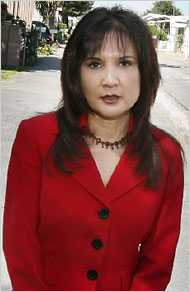 I just got wind that preteenage girl-silly Anaheim carpetbaggtress, scammer, and dubious charity operator, Lorri Galloway, has endorsed carpetbagging union executive and Coto de Caza resident, Joe Kerr for County Supervisor for our 4th District. That’s pretty funny – first that anybody would value this endorsement of this ethically challenged nincompoop, and  second because Galloway set a record in 2010 for fake addresses – three of them – in her own comical run for the same job. A lot of comedy came out of that scampaign, but not a dime’s worth of substance.

Here’s a snippet from some sort of press release:

“Joe Kerr is an effective problem solver who will bring new energy and new ideas to county government,” said Galloway. “Joe’s experiences, as both a fire captain and an advocate for first responders, will serve him well on the board. I am excited to announce my endorsement of his campaign.”

Lorri Galloway served on the Anaheim City Council between 2004 and 2012. She is the founder and Executive Director of The Eli Home, which provides shelter for abused children and their mothers. 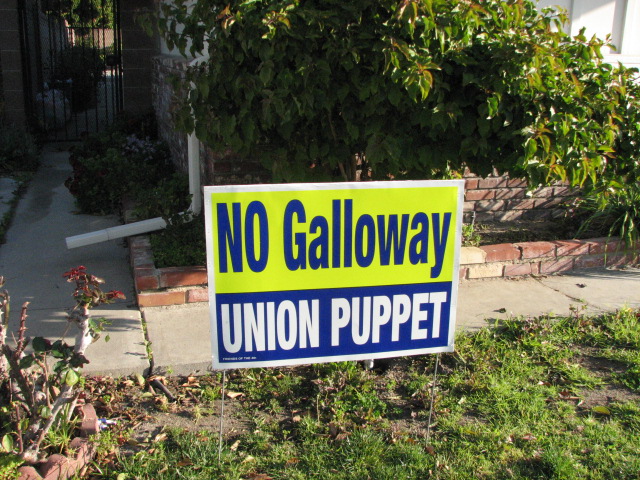 I always love those fake, canned endorsements, written by campaign consultants for endorsers who are too lazy or illiterate to scribble their own. Lorri would have us believe that Coto Joe, a public employee union president is going to bring “new ideas” to county government. Really? Like what? Fire Heroes retiring at 40 with 100% of their pay?

A way back, when her carpetbagging candidacy actually seemed plausible in some circles, Anaheim Hills’ Precious Princess unleashed a video campaign that portended  all sorts of unintended hilarity.

It was called “Lorri in 4th Gear” and was supposed to feature the Precious One in meaningful dialog with her would-be constituents. The first video was so comical and so amateurish that there were no more.

Now, Galloway’s efforts have given new meaning to the phrase “Lorri in 4th Gear” as she has now slipped under the vote count tallied by Buena Park’s Art Brown – who barely campaigned at all and is now in third place. Here are the latest numbers posted by the ROV:

As you can see, things aren’t looking too good for Lorri’s Legacy. Of course her dollar to vote count isn’t nearly as embarrassing as Hide and Seek Harry Sidhu and his union pals, so there’s always that perspective to fall back on.

POST UPDATE FROM ADMIN: A DEMOCRAT FRIEND CALLED ME LAST NIGHT TO INFORM ME THAT SHE HAD RECEIVED A HIT MAILER (BELOW) ON SATURDAY. IT WAS THE SAME MAIL PIECE THAT HIDE-N-SEEK SIDHU HIT LORRI WITH BACK IN 2004. LOOKS LIKE HARRY’S FIGHTING WITH PRECIOUS FOR 2ND PLACE.  WHAT’S NEXT, SIDHU HITS FAHER, ROSIE OR ART? WELL IF HE DOES, HE’D BETTER DO IT QUICK BECAUSE TODAY IS THE LAST DAY FOR MAIL.

At least he did in the 2004 campaign mailer a Friend forwarded to us. And we faithfully reproduce it below. The basis of Sidhu’s assertions come straight from an Orange County Register article by Marla Jo Fisher from 1995.

As you know we don’t have a lot of respect for old Hide and Seek, but hell, when you’re right, you’re right. 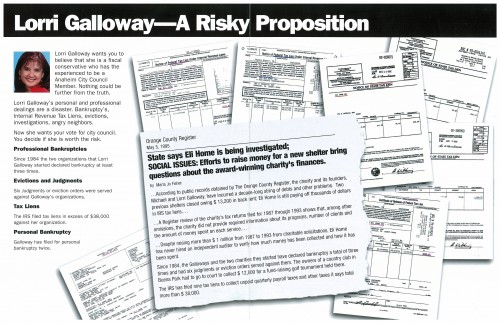 Ye gods! A history of multiple bankruptcies, tax liens, evictions and judgments, unaudited books. And she wants to  be in charge of the County budget? Yikes!

Perhaps the most telling behavior described in the Fisher article is the creation of a new “charity” on the day before the previous one declared bankruptcy. Well, like the dopers say – ya gotta keep the buzz going.

Maybe the cute little teenager routine really works at dodging accountability for dubious behavior. But will it get her elected County Supervisor as a carpetbagger?

The Galloway clan seems to be doing alright. Who knew the hopscotching “charity” business payed so well? 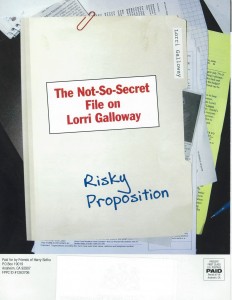 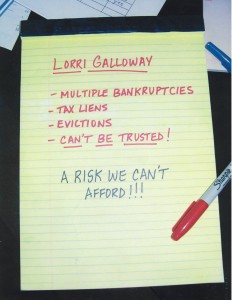 END_OF_DOCUMENT_TOKEN_TO_BE_REPLACED
Posted onMay 18, 2010May 18, 2010Boohooism
by Mr. Peabody5 Comments on The Priorities of Organized Labor

Like their brethren among the ranks of the public employee unions, it appears the non-government unions want to grab as much government gravy as they can, too. 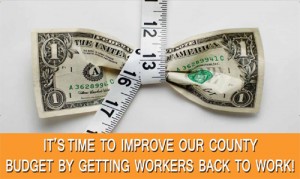 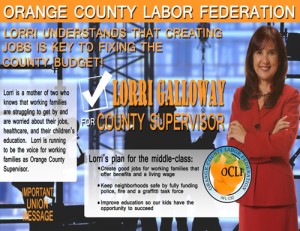 See, we’re in a budget crisis. So what’s the solution? Jobs! Say what? It takes a few mental bends to figure it out, but presumably people with jobs will pay taxes and increase tax revenue. But wait! Where on Earth are those jobs going to come from? Galloway knows: they come from projects funded by current taxpayers. In other words, ya gotta spend more money to make money. The typical big government refrain. Will it ever break even? Of course not, but who’s keeping track?

Naturally, those “living wage” earners will also need a place to live and Lorri probably has a plan for that too – more subsidized low income housing, of course!

Of course the unions have no more conception of what a County Supervisor does than do Harry Sidhu or Lorri Galloway.

Supervisors ARE NOT in the jobs creation business. They are supposed to be there to manage the County government.

And why can’t people like Galloway look at government  from the taxpayers point of view? That is: to provide necessary County services efficiently at the best value? Instead its all about satisfying the government workers and their demands. And that’s exactly why the State and the local governments of California are so completely screwed up.

It’s pretty simple. Galloway wants to go to work for the unions, and they are already working for her.

Apparently the Precious Princess has sent out a campaign mailer, and boy is it hollow. Almost as empty as her noggin. Here’s one side:

Ah, the Shining Path to a brighter future runs right through Galloway and her fortune cookie. Pedicures for everybody!

Here’s the other side:

Oh oh! Hide and Seek Sidhu has already staked out that territory. And come on, Lorraine, you’re taking credit for the All Star game and the Kaiser expansion? Hell, Kaiser already has a medical center in Anaheim only a mile away. What’s going to happen to that? The only thing Galloway can really take credit for is the massive ARTIC boondoggle that is siphoning off $140,000,000 Measure M tax revenue into Curt Pringle’s white elephant.

I wonder if Disney is going to like the Precious Princess taking credit for their expansion. Hmm.

Before she blessed us here in OC with her Presence, Lorri Galloway lived in Monterey County. There, according to State Superior court records, Galloway and her husband Mike were sued by Barbara J. Russell. How come? According to an agreement, Mrs. Russell, Mike Galloway’s aunt, had entrusted title to her home to the Galloways, who then proceeded to borrow against it three times without telling Russell. Naturally, the Galloways defaulted on the loans and the home went into foreclosure.

And that’s not very nice now is it, Lorraine?

Mrs. Russell tried to get the cost of her lost home back and successfully sued her relatives in the Monterey County Superior Court, but, seemingly, to no avail. Apparently, she got cancer and died, never collecting the judgment.

Not long afterward Galloway showed up in OC praising the Lord for her good fortune in real estate investments. Now why does that put me in mind of a crooked televangelist?

If this is the way Galloway treats her own family we can only hazard a queasy guess as to what she might have in store for us – the would-be constituents of her carpetbagging campaign for 4th District County Supervisor. Throw in multiple bankruptcies and the character profile that emerges ain’t pretty – no matter how nice the manicure is.

Greenhut praises Shawn Nelson’s willingness to stand up the incessant demands of the public employee unions – especially the powerful unions at the County that have already started to attack his candidacy. He also correctly points out that Sidhu and Galloway would both be supportive of the horrendous anti-taxpayer labor decisions made by past county supervisors.

In passing, Greenhut notes that both Galloway and Sidhu are recent arrivals in the 4th District from Anaheim Hills, which is in the 3rd. Steve is too kind to use the term “carpetbagger” to describe the behavior of these too miscreants, but I’m not. They both established fake and unlawful  “residences” in their quest to favor us with their own weird ego-driven candidacies.

But back to Nelson. This endorsement is important. The Register still has tens of thousands of subscribers in the 4th District and absentee ballots will start arriving – and being returned – this week. 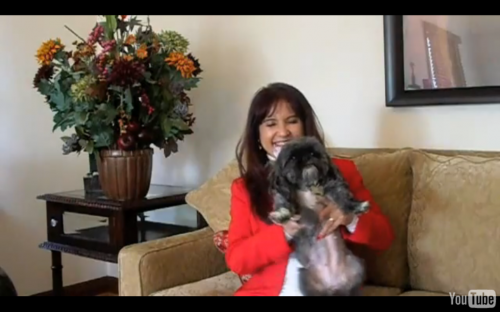 As a former abused doggie myself, I know what it’s like to be mistreated. Here is poor “Bella” yanked around as a stage prop by her owner, the infantile 57 year-old airhead Lorri Galloway – who insists on acting like a scatterbrained teenager.

Viewers were shocked when Galloway hoisted this poor girl into the air, putting all her goods on display (not my type, even when I was alive).

We all sort of got the impression that Ms. Galloway would soon be wandering off to her bedroom to have a tea party with her dollies; or maybe play house with the stuffed animals on her bed – Mr. Bonkers and Glenda the Giraffe.

Real nice manicure and coif, though (on Galloway and Bella). Now there’s a couple of high maintenance females.

You know, this post is just too good not to keep sharing with the Friends.

It appears that carpetbagging Precious Princess stopped making her ludicrous “Lorri in 4th gear” videos after the first one bombed so spectacularly.

Too bad. The spectacle of a 57 year-old woman doing her little dress-up teenybopper routine really is priceless.

Hardly anymore introduction is necessary. This clueless airhead wants to be a County Supervisor. True, the bar has been set pretty low in the past. But this is ridiculous. I’d rather vote for her little dog “Bella.” Too bad Bella is a carpetbagger, also.

Last summer we thought her “cute shoes” comment was indicative of a frivolous, unlikely candidacy. Now we know better. Oh, and by the way – shame on Anaheim for electing this idiot to their city council.

Enjoy, if you can keep your last meal down.

It’s always ironic when your supporters begin to unwittingly advertise your failures. Such was the case when the Liberal OC’s Dan C posted about a recent campaign fundraising BBQ held at Lorri Galloway’s Address #3 in the 4th Supervisorial District. Dan added some fun photos that demonstrated how few people actually showed up for the party.

Dan seems to be really concerned about the fact that his Precious Princess is a carpetbagger and that people might think the house is nothing but a front. Claims Dan hopefully:

And there’s no question Lorri lives here.  The home is covered with photos and personal items that clearly distinguish a home from a house.

Uh, yeah, right Dan. Anything you say. With the thirty-year old mismatched furniture and the cheap framed prints on the walls (courtesy of Galloway’s Eli Home thrift store) the place doesn’t even look plausible. Maybe Dan rifled the medicine cabinet and found some toothpaste or deodorant conveniently left for his discovery.

Well Dan C. has good cause to worried about the carpetbagging issue. Galloway started her campaign cooking up a fake residency in an Office/Professional zone – which is illegal in Anaheim. After an abortive phony “stay” in a loft over a business Galloway had to “move” yet again to yet another cooked up address. That’s three bogus addresses since January, Dan. What tenacity!

The simple, unvarnished fact of the matter is that Lorri Galloway lives in the 3rd Supervisorial District, not ours. If she wants to be on the Board of Supervisors she should have waited until 2012 to run against Harry Sidhu for that seat.