Skip to content
Posted onJuly 1, 2012July 1, 2012A Step in the Right Direction
by Joe Sipowicz41 Comments on The Three Empty Pez Dispensers

You know, Larry Bennett really could have just left it alone. After dodging a final, humiliating meeting to certify the recall election that drove them out of office, at least one of the Three Bald Tires finally deigned to show up at Fullerton City Hall tomorrow morning to do the deed. It could have been done quietly with as little fanfare as possible. Actually only one of them even needed to show up.

Bennett seems to think the Three Dead Batteries need a sendoff appropriate to all the wonderful things these men have done for Fullerton. Friday he notified supporters of the Three Tree Stumps that there was to be a special council meeting, and that he hoped everybody would show up to let them know what terrific public servants they have been.

Bennett has likely spent the week-end making phone calls to drum up some folks willing to say kind thing about the Three Pea-less Pods. No doubt some will show up. And others are likely to show up now, too. People who recognize the disastrous misrule of these three characters:

Don Bankhead: dumb-bell, and self-annointed king of Fullerton, whose somnolent councilmanic career was punctuated with one Redevelopment boondoggle and union give away after another.

Dick Jones, the southern fried lunatic and loud-mouthed bully who never came to understand that the authority to give orders doesn’t confer wisdom – or even relevance.

Pat McKinley: protector and apologist for the undeniable Culture of Corruption in the Fullerton Police Department that he himself had created. Those ladies weren’t like you. Aliens. Don’t rush to judgement.

And please take Larry Bennett with you. The tide is rising.

END_OF_DOCUMENT_TOKEN_TO_BE_REPLACED
Posted onJune 28, 2012A Step in the Right Direction
by admin71 Comments on What to Do With Former Redevelopment Employees? How About Pink Slips? 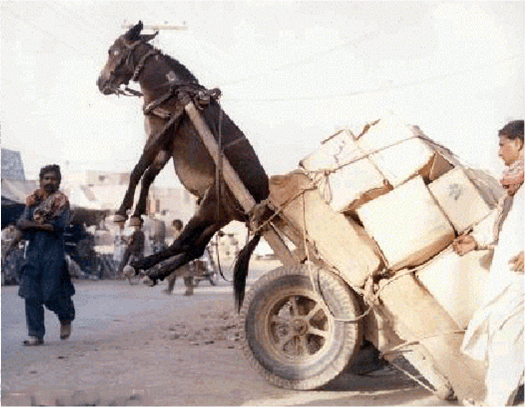 Anybody who reads this blog knows that I have had a running battle with the Fullerton Redevelopments Agency, even going so far as suing the Agency to block its bogus expansion attempt into areas of west and east Fullerton that had no blight. That was just a fraudulent attempt to divert property tax revenue from legitimate recipients.

Now that Redevelopment has been killed off by the Legislature and the Governor, I really have to wonder what has and will become of that small army of government economic planners, boondoggle promoters, bribers, bagmen, design guideline perpetrators, and the rest, whose job it was to gin up sales tax revenue and property tax increment (usually at the expense of somebody else) while dictating land use development in Redevelopment project areas across California.

Lest anybody think I’m just grousing about an abstract problem, consider an article here in the OC Register that points out the exorbitant amount that Fullerton Redevelopment Agency wasted on administration.

Anyway, these folks were in the business of playing developer without taking any of the risks, and with a compliant city council there was never any fear of them being held accountable for their manifest failures.

Some of the former Redevelopment employees will be kept around to close things out. The rest? Who knows? In Fullerton, some of them have already been absorbed into the regular bureaucracy, to be supported by the General Fund – as if these people were simply interchangeable and indispensable parts. The message that move sent to the citizens of Fullerton is a really bad one – that the government has no appetite to shrink, even though a specific purpose has been ended.

END_OF_DOCUMENT_TOKEN_TO_BE_REPLACED
Posted onJune 19, 2012June 19, 2012Behind Closed Doors
by The Fullerton Shadow196 Comments on Pam Keller Speaks! Apologizes For Not Stopping Our Bad Behavior.

Yes, ever sanctimonious, ever self-righteous, Fullerton’s Queen Collaboratrix, Pam Keller issued a statement at the June 5th Swan Song of the the Three Bald Tires in which she really outdid herself. 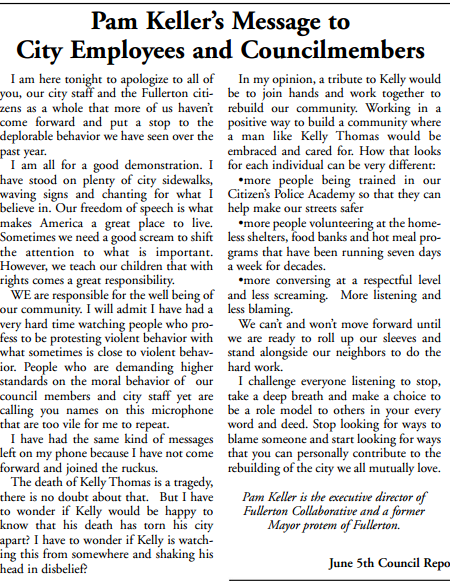 I like the part where Pam declares herself up for a good sidewalk protest. We know all about that. She doesn’t mind screaming at people when her own self-interest is involved. Did Keller even show up at a sidewalk protest in front of the police station to protest the bludgeoning death of an innocent man at the hands of the FPD? Of course not. When there’s nothing in it for her it’s a lynch type mob. 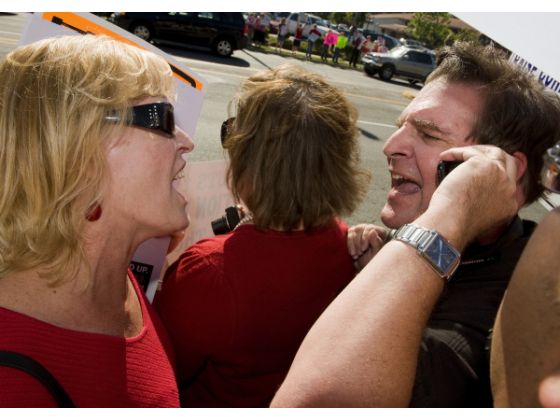 But really, suggesting that Kelly Thomas was even remotely a factor for divisiveness in Fullerton  is stupid even for a dope like Keller.  No Pam, any divisiveness you perceive in Fullerton was caused by rogue, murderous cops and a sclerotic, incompetent regime bent on covering it up; a regime that ripped off its citizenry to pay for it’s own exorbitant salaries and benefits; a regime that handed out free land worth millions to campaign (and Fullerton Collaborative) contributors.

But in reality Keller is as wrong as she can be. We now know that the community is, and was not divided. The people of Fullerton demonstrated solidarity spectacularly on June 5th 2012, the very day Keller delivered herself of her idiotic diatribe. Two thirds of the voters delivered a very different sort of message, a message of unity, hope and reform.

The Recall of Jones, Bankhead and McPension succeeded in every precinct in Fullerton, rich and poor, Anglo, Latino, and Asian-American.

Say goodnight Pam, your party’s over.

END_OF_DOCUMENT_TOKEN_TO_BE_REPLACED
Posted onJune 16, 2012June 16, 2012About Us
by The Fullerton Harpoon249 Comments on Larry Bennett’s Last Gasp 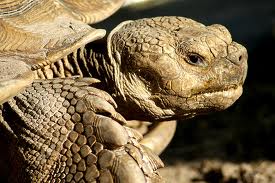 Here is a clip from Rick Reiff’s program featuring our own admin, and the sorry sack of guano known as Larry Bennett. He’s the clown who blew a hundred grand defending the Three Bald Tires from a much deserved recall.

Observe that Bennett is not only a bad loser he is still a liar, which seems to come so naturally. He is still dodging the easiest question of all: if Tony Bushala wanted to control the City Council to further his own mythical development schemes, how much easier would it have been to simply donate to the Three Dead Batteries’ campaigns? The answer of course is a lot. A lot cheaper too.

Did you enjoy how Bennett glossed over the illegal water tax? He still likes it!

Bennett is also still going by the title Planning Commissioner. I wonder how much longer he’ll keep that job.

Yesterday we received this pearl of a comment from Mr. or Ms. Anonymous:

“These paranoid pot smoking hippies put 3 good men outta a job just because they said they wanted to wait until an investigation was complete before commenting on the death of Kelly.

Now these smelly hippies are turning there paranoia on the sidebar which had nothing to do with anything. when will the madness stop?”

You know, I think this person meant to say “Three Bald Tires.” You see, there was simply no tread left. The steel was showing through what was left of the rubber. They were worse than worthless: they were dangerous.

END_OF_DOCUMENT_TOKEN_TO_BE_REPLACED
Posted onJune 11, 2012June 11, 2012A Step in the Right Direction
by The Fullerton Harpoon96 Comments on Steve Greenhut’s Take on the 2012 Fullerton Recall 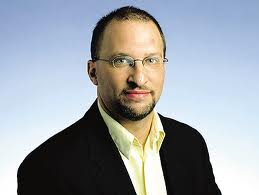 Libertarian columnist Steve Greenhut wrote a recap on the Fullerton Recall, and put it in the context of people taking their governments back. Steve had lots of good things to say about the Recall and FFFF, and we proudly share his pice.

Chris Nguyen, who runs a blog called OC Political, says recently recalled Fullerton City Councilman Don Bankhead has just been initiated into a very exclusive club. According to Nguyen’s research (and I can’t vouch for that) only two men in American history have ever been recalled twice from the same job.

And of course I would be remiss if I didn’t point out that if Nguyen is accurate, then Bankhead is the only office holder in the 162 year history of California to be recalled twice from the same office. And that’s a damn impressive accomplishment.

The day before the election seems like a real good time to replay this sparkling jewel of a video; the one in which Patdown Pat McKinley admits his own failure to lead. It’s got to be real hard for any anti-recall stooges to suck up this one!! When you vote remember this McKinley proclamation: “Council people don’t lead.”

Here’s an illuminating admission by soon-to-be-recalled Councilmember “Patdown” Pat McKinley. The accusation that he has failed to lead fails to resonate with McPension since he denies that he is on the City Council to be a leader. The snippet below was culled from a long interview with the good folks at FullertonStories, here.

Well, Friends, there you have it. And you have a great example of why it’s almost always a bad idea to elect former staff members into political office.

And out of his own mouth McKinley admits and proclaims his own dismal failure to lead. 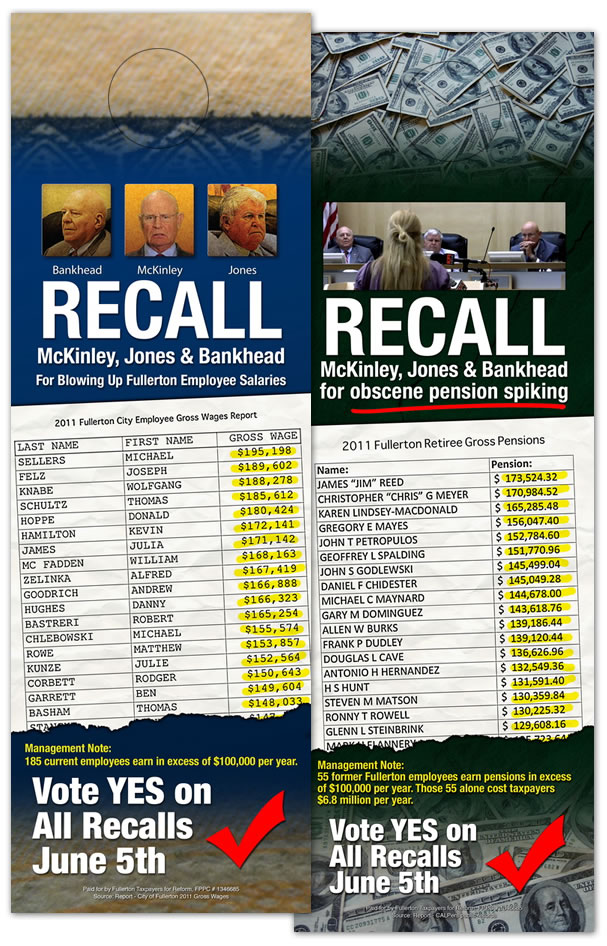