There is a certain personality profile that is so narcissistic that it can’t conceive of the reality enjoyed by others. And that sobriquet must certainly apply to Paulette Marshall, the erstwhile candidate for County Board of Education who was so thoroughly trounced at the March 3rd election that she came in 5000 votes behind a candidate who spent 1/300th of what Marshall did.

If you need any evidence of this disconnect with reality, here’s Exhibit #1, an image harvested from Marshall’s Facebook page the day after the election: 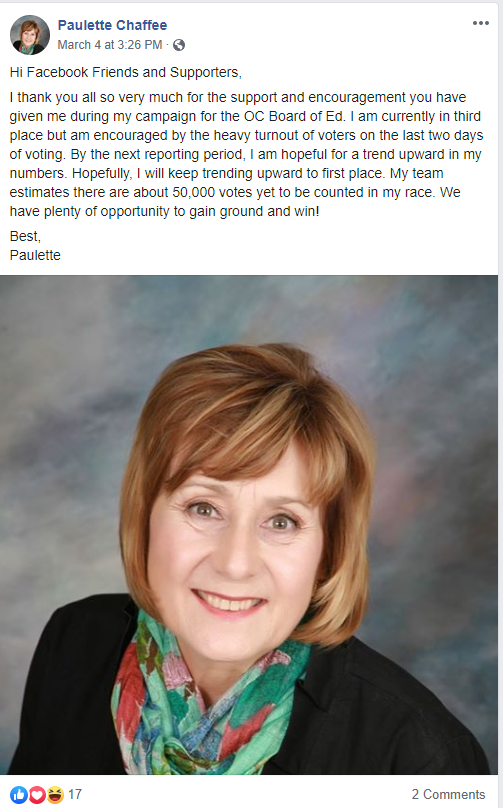 Such delusion in a normal person might be cause for a certain amount of pity from folks. But this is not a normal person. This is thief, a liar, and a fraud. Pity would be misplaced. “Who cares now?” you may ask. You should. Because I predict that Fullerton hasn’t seen the past of Pilferin’ Paulette. Just wait and see. 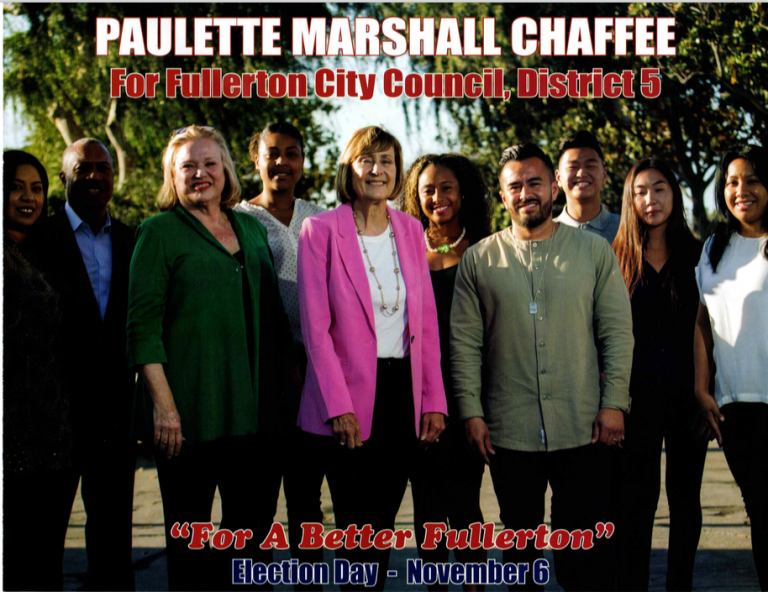 END_OF_DOCUMENT_TOKEN_TO_BE_REPLACED

Remember the thief who got caught jacking campaign signs for Pat McPension last year? We tracked him down and turned in all the evidence, but the cops are still coming up empty handed. 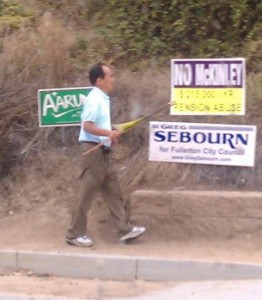 Maybe we forgot to fill out the proper paperwork. 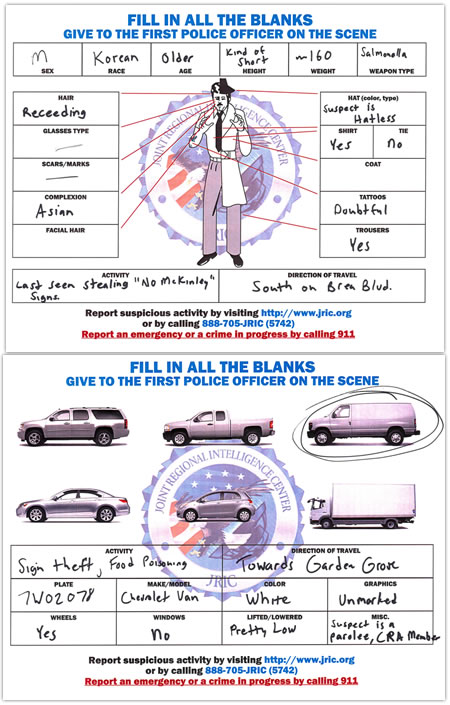 Well, not our cops. But up in San Jose they take political sign theft seriously. That’s why the police and fire unions have offered up ten grand for information leading to the capture and prosecution of some local sign stealers. You can read all about it on CNBC. Those guys up in San Jose sure do value free speech.

Our friends at the Fullerton PD have been provided with plenty of clear photographic evidence of criminal activity, free of charge. We even did all of the legwork for them: following the getaway van back to headquarters, ID’ing one of the suspects, and making contact with all of the eye-witnesses. As far as I can tell, all that’s left is a little bit of paper work and a call to the District Attorney’s office to make sure that the perps aren’t already on parole.

So three weeks have gone by and the election is now behind us. And what do we have to show for our crime-fighting efforts?

An “out of office” email from the detective working on our case.

Ouch, that hurts! Oh well, take your time officer. Any job worth doing is worth doing right. 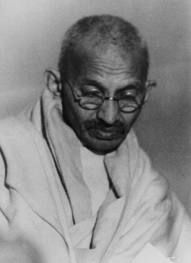 There’s an old adage that goes: the apple never falls far from the tree.

Remember when we traced the “No McKinley” sign thief’s white van back to Roland Chi’s supermarket in Garden Grove?

Well, that would explain an awful lot. Like the use of the family vehicle to commit another crime. Could it really be true?

If so, Chi senior may have wandered out onto thin legal ice.

See, according to the court documents linked below, the Elder Mr. Chi can hardly afford to be breaking the law. Senior Chi is still on probation for the 2009 AR Supermarket food poisoning incident, and the first condition of his plea agreement specifically commands him to Violate no law(s), or else. 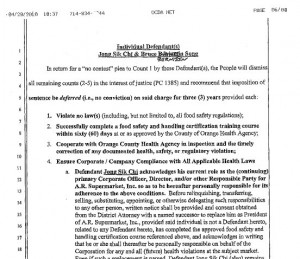 Presumably that would include petty theft and vandalism. In fact, according to an amateur translation of this court document, violating the terms of his probation could put him back on the hook for 2.5 years in prison!

Roland Chi’s entire campaign operation seems to built upon chronic and congenital dishonesty, disregard for the law, and criminal activity. There seems to be no connection between the Roland Chi Family and anybody’s standard of ethics.

You just couldn’t make this stuff up if you tried.

Here’s a picture we found depicting Roland Chi and some other guy who looks a Hell of a lot like the the little creep who was caught stealing campaign signs, here.

Drat the luck! We can’t read Korean. Can any body help out here? Who is Mystery Man who was caught on film stealing signs, stashing them into Roland Chi’s van, and then driving to Roland Chi’s store?

Maybe the Fullerton Police Department can help out here, since crimes are being committed and it’s their job to stop criminals. We’ve already supplied them with lots of clues, but so far we’ve heard nothing but a deafening silence.

END_OF_DOCUMENT_TOKEN_TO_BE_REPLACED
Posted onOctober 22, 2010October 27, 2010Dead heads
by Mr. Peabody24 Comments on Back to The Bat Cave!

When I was just a young Peabody there was a show on TV called “Batman.” It was campy and stupid and highly entertaining.

One thing I never quite understood, though, was how come nobody ever followed the Batmobile back to the Bat Cave – you know, just to find out who Batman really was.

Fortunately, at least one Friend in Fullerton showed more curiosity and initiative than any of the incredibly stupid denizens of Gotham City.

A couple of days ago we reported The Case of the Missing No McKinley Signs, a case that we predicted would be a real brain teaser for Fullerton’s versions of Chief O’Hara and Commissioner Gordon. Remember the little man and his white van? Click on the image below and check out the license plate.

Well, now observe the image below, captured outside Roland Chi’s AR Market in Garden Grove, where all those people got food poisoning and behind which they barfed their guts out; and where Roland Chi ignored all those inspection failure notices and was finally rung up by the DA. Here’s some of their impressive fleet of rolling stock. Click on this picture, and note the license plate number on the van.

Yes, folks, we have a match!

And yes, FPD, you can go ahead and take the credit for the bust. This one’s on FFFF! Will you be wanting a receipt?

We’re not too sure how diligent the FPD is going to be in its investigation into the political sign theft ring that is operating out of Roland Chi’s van. So, ever helpful, we thought we might be able to facilitate things up a bit with a little help from our Friends.

So let’s roll back the curtain and take a peep at Perp #1. Remember this fine fellow, the one photgraphed stealing “No McKinley” signs at the intersection of Euclid and Rosecrans? Take a good look.

And now consider the image below, taken at the CRA endorsing event that was held a few weeks ago – the one where, Roland Chi stacked the meeting with a gaggle of newly minted CRA members, many of whom had to be told what to do and when to vote.

The handsome dude in the yellow shirt sure looks familiar. Could this indeed be the sign thief pictured above? Can’t quite zoom in on that name tag. You decide. 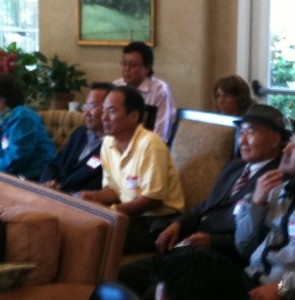 If you know, please share the identity of this individual. Your fellow Friends will be grateful. Hell, you may even get a Special Fringie Award come December!

So what do you do on Sunday afternoon after church and you don’t give a damn about pro football?

Let’s hope this was not the message of Sunday’s sermon!

An alert Friend snapped this image of a respectable-looking, necktied gentleman who was taking down “Bad Chi” signs on Euclid and Malvern. Here’s what our Friend told us: 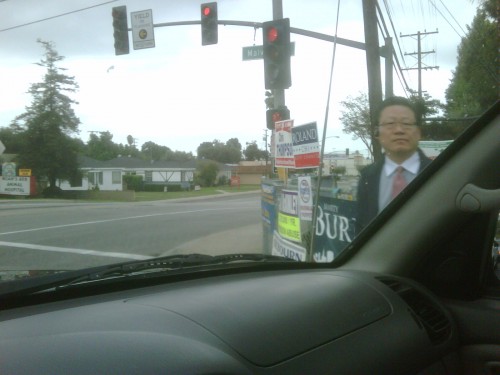 Can anybody identify this lawbreaker? We are now giving odds that this guy is not related to Roland Chi in some way. And the odds are starting at 100-1.