Skip to content
Posted onOctober 17, 2018Setting The Bar Low
by English Major15 Comments on We Get Mail: Spot the Problem

This just arrived from one of our intrepid Friends via Facebook. 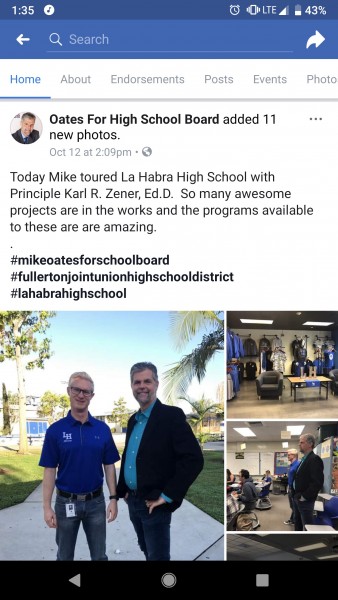 Mr. Oates is running for Fullerton High School Board.

What’s wrong with this picture?

Bottom Line: The advisor who rigged this year’s ASB election (and possibly those of earlier years—no way to know) remains on staff. The student who proved the wrongdoing—Jacob Bigham–was suspended, stripped of the Vice Presidency he legitimately won and banned from future ASB participation.

Since accessing the advisor’s database was the only way to prove fraud, why is he punished? Without his vigilance, how many future ASB elections would be rigged without anyone knowing?

If the whole purpose of student elections is to inculcate democratic values, what message does this send to students?

If an ASB advisor does not trust the electoral judgment of Troy High School students —ranked consistently among the nation’s highest performing—at what other schools are such elections routinely overruled without anyone knowing?

Is the sanctity of student elections protected by law? While the State Education Code is vague, the Elections Code is very specific in defining “election fraud” as applying it to “all elections.” No distinction is made. Just last spring, an arrest was made in a case of election in a student election at Cal State San Marcos.

The unilateral, secretive, intentional nullification of an election is as fundamental abuse of power as can be committed against democratic values. And exposing such an abuse is as high a service as a citizen can perform. Thank you, Jacob Bigham. You are one true Troy Warrior.

END_OF_DOCUMENT_TOKEN_TO_BE_REPLACED
Posted onMay 14, 2011May 14, 2011Education Uber Alles
by Travis Kiger85 Comments on Dealing with Denial: A Test for Teachers 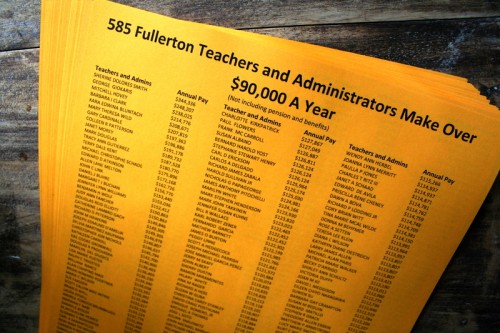 END_OF_DOCUMENT_TOKEN_TO_BE_REPLACED
Posted onApril 9, 2011May 16, 2011Education Uber Alles
by Travis Kiger110 Comments on 432 More Teachers and Admins with Nothing To Complain About

There are an unknown number of absentee ballots yet to be counted.

View the complete results at the Orange County Registrar’s website. The next update is scheduled for 5:00 pm tomorrow.

Last week the LA Times released an in-depth analysis of LAUSD teacher performance data which shows a wide variance in teacher quality that can greatly detract from a child’s education.

The analysis angered the teachers unions, who have spent decades lobbying to hide teacher performance data from the public in order to protect bad teachers. As retribution for the LA Times’ disclosure of public information, the unions are attempting to organize a boycott of the newspaper.

State Assemblyman Chris Norby, who was a teacher himself for 17 years, sent out an email blast encouraging these disclosures and asking the public to pay attention to this story.

“Shielding poor-performing teachers hurt both the kids and the teacher. Recognizing and emulating high performers will help us all,” wrote Norby. He also highlighted another major find in the report: the discovery that the educational disparity between  teachers within a given school is much greater than disparities between schools, suggesting that education can best be encouraged by holding teachers more accountable, rather than just pouring money into under-performing schools.

Perhaps someone will attempt disclosure and analysis of teacher performance in Fullerton school districts, although the unions would probably fight it every step of the way. For the good of the children, of course. What we really need are school boards and state legislators who will fight union efforts to coddle bad teachers.

Despite their enormous operating budgets, school boards rarely receive the attention and oversight they deserve. Perhaps the public is disheartened by the realization that school boards operate under behemoth state bureaucracies that leave little room for local input and control.

But in the next few years our schools will have a good shot at making serious improvements that affect the classroom. While they will continue to be challenged with budget cuts, there will be new opportunities to renegotiate bad union agreements and eliminate wasteful programs in favor of putting resources directly into the classroom.

Let’s hope voters decide to make some changes. Here are the starting lineups:

Board members Minard Duncan and Ellen Ballard decided not to run, which means there are three available seats and only one incumbent in the race. The candidates are:

All three incumbents are running for reelection. The candidates are:

Parents, the PTA that you all belong to is behind trying to raise your property taxes by reducing the threshold for passage of parcel taxes.

The California State PTA has endorsed the “Local Control of Local Classrooms Funding Act” which reduces the voter approval requirement to raise taxes from 2/3rds down to 55%. This will make it much easier for local school districts to place new property taxes on local homeowners to benefit the teachers’ unions.

QUIT THE PTA. It is a bad lobbying organization disguised as an innocent thrower of classroom ice cream parties. It hurts children, families, the state and the country.

Moms and dads can help in the classroom, support schools and be great parents without supporting this organization which is stabbing you in the back as a pawn of teachers unions.