With the CalSTRS retirement system circling the drain and preparing to ask taxpayers for a bailout, it’s probably a good time to remind you who will be reaping the generous rewards from these unsustainable commitments made by gullible school boards under union pressure. The OC Register recently released the CalSTRS database obtained through a public records request.

We couldn’t help but notice that FFFF favorite Cameron McCune topped the list with a pension amount that is more than double the rest. McCune was the administrator who strapped Fullerton with the unconstitutional school laptop program that forced parents buy $1,500 Apple laptops for their children and is still subjecting kids to unsafe Internet access.

It is unlikely that any of these retirees were strictly teachers. Most if not all of them were superintendents, principals and other administrators who were able to eke their way out of the classroom and on to even bigger bucks.

Here’s an e-mail we received from a Sunny Hills High school student that raises some good questions about the lack of communication between High School District and the NOCCCD and why FJC requires that people pay to park when nobody is using the facility.

This past Friday night, I went to the Sunny Hills vs. Fullerton H.S. School football game at Fullerton High which happens to be right across the street from Fullerton Junior College which happens to have a parking structure right across the street from the high school’s stadium.  I parked in that parking structure and ended up getting a parking ticket for not having a Fullerton College parking permit.  I did not think that at this time (7:00-9:00pm) on a Friday night anyone would be checking for the parking permit because of the event that was going on at the stadium.  There were many cars parked in the structure who were apparently also going to the game that did not have a parking permits.  The officer that gave me the ticket was named Officer Gonzalez, I believe.

Is Fullerton College really in that much of a budget crunch that they need to go out and give a bunch of high school students parking tickets to collect twenty seven dollars?  If people didn’t park in this structure we would be parking in the residential areas to the north of the stadium which would bother the residents that live near the stadium.  The group that issued the ticket is discouraging students from going to high school promoted events. Can’t someone from the High School District and the College figure out a responsible plan that would assure people can go to the football stadium, watch a football game and not get a parking ticket?

Thus readeth the Fullerton Coollaborative’s website. So it was strange then (or not so strange, given her rather inconsistent adherence to principles), that Pam Keller supported moving a McDonald’s franchise right across the street from Fullerton High School.

Now just about everyone knows that purveyors of “fast food” are one of the prime contributors to adolescent obesity and “lack of fitness,” yet somehow the connection eluded Keller even though she’s paid by the Fullerton Collaborative (through the Fullerton School District) to supposedly do something about it in Fullerton.

Although she changed her vote at the last minute so as not to go down with the rapidly sinking S.S. Redevelopment Boondoggle, she was previously cheering (and voting for) an “upscale” Spanishified MickeyD’s that would “go with” the High School buildings across the street. It was all part of a grand bureaucratic scheme to build another massive apartment block in downtown Fullerton.

Apparently Pam Keller was more concerned about leaving her mark on Downtown Fullerton than on childrens mid-sections!

On July 7th at 6:30, the Fullerton Redevelopment machine is revved up and ready to shove the $6 Million Dollar burger plan, fake old and all, down the public’s  throat.

A request to construct an approximately 4,400 square-foot drive through fast food restaurant for McDonalds in a Community Improvement District, which includes applications for a minor (doesn’t sound minor to me) development project for the site plan and architecture (fake old crappola that people are sick of), and a tenative parcel map for lot consideration and lot line adjustment purposes, on property presently located (and owned by the Redevelopment Agency, ie. tax payers) at 501 N. Pomona Ave. (N.W. corner of Chapman and Pomona,  across the street from Fullerton High School), (Categorically exempt under Section 15332 of CEQA Guidlines).

How could this project be exempt under CEQA? It’s a proven fact that this project will be detrimental to the health, safety and general welfare of the kids attending Fullerton High School and injurious to property or improvements to the area. This McD’s project is a part of a larger project which must be considered ONE project! I smell a Mclaw suit ! ! !

END_OF_DOCUMENT_TOKEN_TO_BE_REPLACED
Posted onMay 23, 2009January 5, 2010Don Bankhead
by admin12 Comments on George Giokaris: School Snitch/Team Player. But Which Team Is He On?

Just what does Fullerton H.S. District  Superintendent George Giokaris owe Fullerton City Manager Chris Meyer? What compels him to be a tattletale on his own Board? Unlike Mike Escalante, his predecessor, Giokaris apparently wants a McDonald’s right across from Fullerton High.

Last week, County Supervisor Chris Norby (FHS ’68) spoke with former district Superintendent Escalante and current Boardmembers Dutton and Singer. All confirmed their opposition to the $6 million McDonald’s move across the street from FHS.  Escalante recounted an earlier conversation with Meyer opposing the relocation on traffic and safety grounds.

Unfortunately, these concerns were kept from the city council.

This week, Norby wrote a letter to Dutton and Singer suggesting they communicate their position to the city council, while there’s still time. Giokaris saw the letter, then quickly dispatched a “heads up” email to Meyer warning of a possible lobbying effort by members of the High School Board against the McDonald’s relocation fiasco.

Imagine that – a warning from a Superintendent that his own bosses on the School Board may actually stand up for their students’ safety and their taxpayers’ wallets! Instead of tattletaling to Meyer, he should repeat the opposition of his predecessor and oppose this super-sized boondoggle!

And we say to Dutton and Singer–if you really do oppose this $6 million move, say so now. Don’t be intimidated by Giokaris’s little intrigues behind your back – be outraged by them!

Credible community sources report that Councilwoman Sharon Quirk has second thoughts about her vote to commit $6 million in redevelopment funds to move McDonald’s 150 feet east—right across the street from her alma mater, Fullerton High School.

The move is opposed by the HS District due to traffic concerns on congested Pomona Ave. Health-conscious parents point to studies showing kids at high schools within 500’ of fast food outlets have 5% higher obesity rates. Councilman Dick Jones complained that the redevelopment agency is stuck paying for the entire move—that the supersized multi-national McDonald’s Corp is paying nothing.

This is a one-sided deal that deserves to be deep fried!

Quirk is within her powers to re-agenize the item and vote against it. She could join Jones and Nelson to counteract this Big Mac attack on our wallets and waistlines.

Will Fullerton High School’s venerable arches soon be in the shadow of the Golden Arches? Or will Quirk wisely put the $6 million back in the redevelopment kitty to fight blight at some more appropriate location?

FUHS is the only high school with two alumni in baseball’s Hall of Fame (Who are they, bloggers?) So, step up to the plate, Sharon. Get off your sesame seed buns and get this back on the agenda. This is a civic embarrassment that only you can reverse! 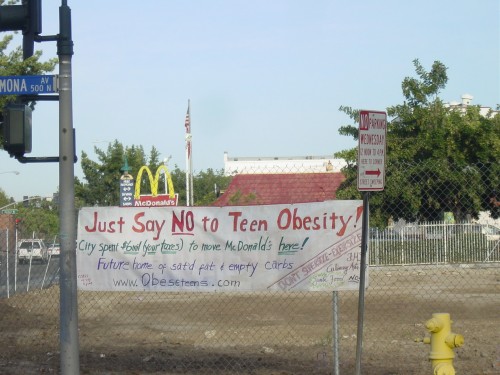 One of our sharp-eyed Friends took a photo of this banner last Tuesday morning. By Tuesday night, it was gone.

During its brief life, it asked the telling questions:

The sign hits McDonald’s hard, though—to be fair—McDonald’s doesn’t want to move at all. Just like the residents who lived in the demolished homes didn’t want to move. Redevelopment hard at work!

After all, that fence is paid for by the taxpayers, just as everything else in this $6 million supersized boondoggle!

And it was covering the eyesore of the vacant lots where vintage homes once stood.

Take pity on your campus, you FHS alums Quirk and Keller! Listen to the District Board members. Superintendent Escalante told City Manager Armstrong back in 2001 that the school does not want a McDonald’s across the street or its drive thru lane accessing already congested Pomona Ave. That information has been covered up for years!

As the Fullerton Joint Union High School District struggles with drastic budget cuts that threaten to strip public education back to the three R’s, Fullerton SWAT and the Sunny Hills High School administrators decided that their students should spend the day playing “PARAMILITARY POLICE RAID” at the expense of Fullerton taxpayers.

The Orange County Register reports the students were given a 14 day window in which to expect 3 SWAT trucks and an unknown number of armored pseudo-soldiers to storm the campus in an attempt to replicate the fear and panic of an active shooter situation.Despite the unfortunate news of a real attack in another part of the country, the Fullerton SWAT team was unable to inspire the high school students into true hysteria. The event did give Officer Mike a chance to remind the students of the days’ lesson: if this was a real hostage situation, they should be curled up in the fetal position begging for their lives.

This unfortunate event came at a time when all school expenses and activities are under strict scrutiny due to $6.9 million in projected budget cutbacks. Somehow this waste-of-a-day just slipped past those watchful eyes at the district and the taxpayers are left pondering which public learning institution will be featured as the next simulated warzone.