Last night the Fullerton City Council voted to give the County of Orange $4,000,000 of your money. Right now. Right out of your pocket.

So what’s the reason for this unusual generosity? It was because the County was threatening to sue the City over the diversion of property tax increment from the County through the bogus establishment of an expanded Redevelopment project area where no blight exists as required under State law.

The City lawyers, Rutan & Tucker,sure must have felt they had a lousy case – because they cooked up a deal behind the scenes to buy off the County with a ton of up-front cash plus some hinky lease back deals on down the road. Ultimately the total payout will be $25,000,000. We shared news of the the payoff meetings here . The County knows the Redevelopment expansion is fraudulent, because it has already made that argument publicly; but apparently there are at least three votes on the Board of Supervisors to take the deal and help out a fellow government agency. The County will formally go for the gold next week.

To their credit, both Shawn Nelson and Sharon Quirk-Silva voted against an action that both robs the taxpayers of Fullerton and violates a basic ethical standard. The other three broke the law, and they know it. But they’re not out of the woods, yet. A court will decide the matter.

END_OF_DOCUMENT_TOKEN_TO_BE_REPLACED
Posted onAugust 21, 2009December 28, 2009Arts & Architecture
by The Fullerton Harpoon4 Comments on Redevelopment Hard at Work on South Raymond? Big Toy #1?
Fullerton has a whole gaggle of Redevelopment “project managers” looking for something to do. One of them, Nicole Coates, was quoted in an August 4th, 2009 Barabara Giasone Register article with regard to the sale of the old Stone Container plant on S. Raymond Avenue –part of the new redevelopment expansion area. Hmm.

Supposedly the property is being sold out of a bankruptcy court to a Newport Beach developer for a song. According to the article the new owners are going to try to use the physical plant on an interim basis, until it can be demolished – and, presumably, redeveloped.

But redeveloped as what, and with whose money? In the article, the new owner makes no promises after “demolition.” Will the land remained zoned for industrial use? Maybe. Maybe not. Barbara didn’t ask.

We’re picking up the strong vibe of a big new toy for our redevelopment staff to play with that will provide job security and lots of new property tax increment. What kind of toy? Use your imagination. “Mixed Use” springs most readily to mind, although the site is a loser for commercial retail – which means the usual formula would be applied: lots of housing and some facade commercial just for appearances.

And we wonder what they are planning for us.

END_OF_DOCUMENT_TOKEN_TO_BE_REPLACED
Posted onAugust 19, 2009January 4, 2010Arts & Architecture
by Fred L. Olmsted7 Comments on The City is Violating Its Own Law in Hillcrest Park 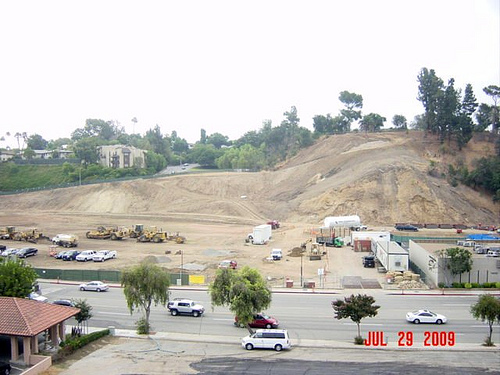 END_OF_DOCUMENT_TOKEN_TO_BE_REPLACED
Posted onAugust 3, 2009December 30, 2009Behind Closed Doors
by admin32 Comments on HEY WHAT’S WITH ALL THE SECRECY; THIS IS A DEMOCRACY, RIGHT? Here’s an item on tomorrow’s agenda to be addressed by the City Council behind closed doors:

Let’s get this straight. The Redevelopment staff (aka Rob Zur Schmiede) is asking for council permission to begin negotiations for a huge piece of property off Euclid, presumably to build low income housing. He’s trying to do it behind closed doors under the cover of the “closed session” where he can get the ball rolling on a project that has NEVER been authorized by anybody. The key phrase here is “price and terms” which justifies the secrecy but that in reality is being used as a fig leaf to hide the fact that the council is giving tacit approval to a project that has never been offically authorized by them, in public – even in concept. In fact the very nature of the request is the first in what will be a long series of incremental approvals. In fact, this process is called incrementalization for that very reason.

Well, WE object to these shennanigans even though it happens all the time.  Authorization to negotiate price and terms is premature, and at this juncture issues that are not covered by under Brown Act exclusions are already occuring. What is involved is a secret commencement of the process that will lead to land use entitlements and rezoning. This is wrong, wrong wrong. This is obviously going to be a major project with major policy and CEQA implications.

The City Council should agendize this issue for a public hearing immediately with proper notification to all the neighbors. If they choose to go ahead with this (likely monstrosity), THEN they can schedule their “price and terms” meeting in the cozy confines of the backroom!