It looks like I might be a “hater”. As one of only a handful of people to come out against the “Pine Forest Staircase” I’m going to make the leap that Fitzgerald is talking about me and therefore will respond accordingly. 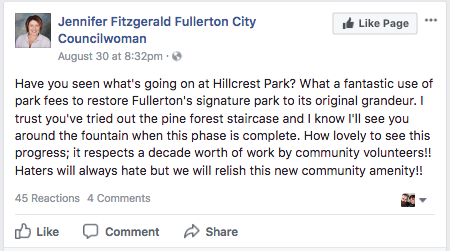 Let us take the points in reverse order.

This is not a “New” community amenity as this is one of Fullerton’s oldest parks. All of those people who remember the Duck Pond aren’t having a massive shared delusion as it really did exist. The city let this park fall apart and is now trying to sell it as a win that they’re finally fixing what they themselves broke.

Fixing something you broke isn’t an act of respect. The city let this park fall into complete disrepair owing to budget constraints and poor management as folks like Fitzgerald prioritized six-figure pensions for her friends (Danny Hughes, Joe Felz, et al). To make matters worse the city council has yet to budget for more staff to maintain this park once it is completed. Add to that the likely budget cuts coming thanks to her (and her cohort’s) over spending on FPD/FFD Overtime/Pensions. 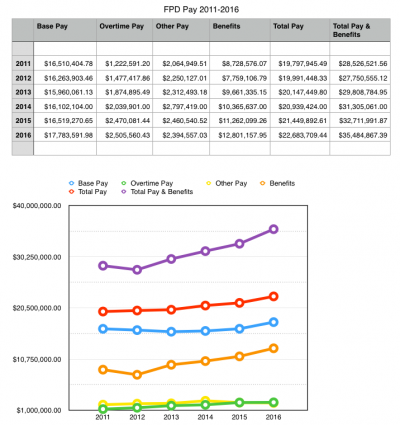 The Pine Forest Stairs are shoddily constructed and were significantly overpriced. “People like them and use them” Fitzgerald and her friends claim. Do you know what else they’d like and use? Better made stairs that cost less.

This type of fiscal deflection is ludicrous from an elected official who should be demanding the best bang for our buck and not running interference for developers. To be fair this is a common refrain from elected officials. One needs only listen to Bruce Whitaker justifying overpaying for a park because it’s in the “Gem District“. The council literally rewarded owners for their negligence at a premium price in the instance of Pearl Park. 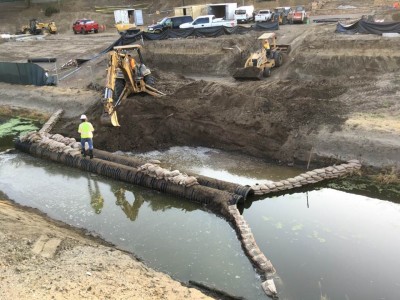 This project isn’t restoring the park to it’s “original grandeur” as you do not restore something by completely altering it. This is a renovation and not a restoration. A bridge nobody will have cause to use is further destroying what was the duck pond and the pine stairs are totally new. Words matters and the idea that this is a “restoration” is an outright lie. Is the city putting the trees back into the park? No. They were too busy pumping water into Laguna Lake to bother putting any of it on the trees they let die and then had to remove.

And finally let us talk about Fitzgerald’s economic illiteracy here.

“A fantastic use of park fees”.

Park Fees are fees the city takes for new development. When the city allows a new mega-apartment complex to go up they collect a bucket load of money for the purpose of adding or improving parks. I’ve addressed this issue before here.

If this is a legal use of fees is debatable but is it a good use let alone a “fantastic” use of fees?

This is nothing more than Jennifer Fitzgerald perpetuating the ‘Broken Window Fallacy’ as explained by Frédéric Bastiat.

I’ll sum it up simply.

The city council and city management broke Hillcrest park and are now using millions of dollars that could have been used to buy land in Coyote Hills or to fix our long neglected “Poisoned Park” or even to purchase Fullerton’s now most expensive park which Whitaker was all too happy to overspend taxpayer’s money upon.

This money is being used in the least efficient way possible because it is fixing that which never should have been broken. It wasn’t an accidental breakage either. Hillcrest Park has suffered decades of neglect as council after council ignores any semblance of accountability while generation after generation of overpaid bureaucrats toil away on grand schemes to fix what they should have been protecting in the first place.

Fitzgerald’s reasoning logically follows that we should neglect and destroy all of our parks in order to spend money fixing them. Wouldn’t that just be “fantastic”? 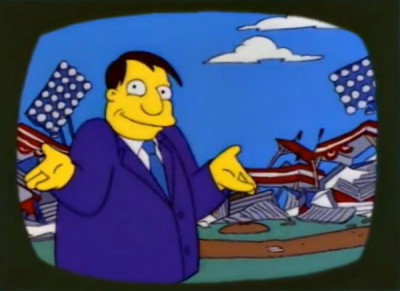 After years of unbalanced budgets we can’t really expect much more from Fitzgerald or the Fullerton City Council but that doesn’t mean we shouldn’t be outraged at their cavalier attitudes or sheer incompetence.

I still naively expect elected officials to work for what is in our best interest and to be able to explain away criticisms without resorting to childish colloquialisms.

Fitzgerald might be correct in that “haters will always hate” but it is also true that economic illiterates will never math.

32 Replies to “Fitzgerald Hates on the Haters”