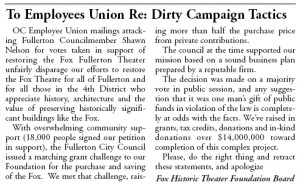 Last week Nick Berardino and his goons at OCEA sent out mailers alleging that 4th District Supervisor candidate Shawn Nelson voted in his own business interest to and that he did something for the campaign contributor who owned the Fox Theatre in Fullerton. All nonsense, of course.

These were really lame pieces and probably got Nelson a lot more votes than they cost him. But this effort was quite revealing in that it demonstrates the utter hypocrisy and self-interest of “Bullhorn” Bernardino and his crew.

While this guy is making up stories about Nelson, he has turned a blind eye to a real government miscreant, County Clerk, Tom Daly whom we have busted giving jobs and no-bid contracts to friends and relatives of contributors, as well as pitching over two million bucks into the worthless property at 433 West Civic Center Drive. Oh yeah, and then there was that $48,000 contract given to another campaign contributor to “study” a sports hall of fame.

The OCEA has watered Tom Daly campaigns with more than $4000 over the years, no doubt hoping the investment would some day flower into something that looked like a county supervisor. Instead it helped create an incompetent little emperor that has no accountability, no oversight, and whose fiefdom is rife with cronyism and kickbackery and wasted millions.

I would love to believe that Berardino meant to put Tom Daly’s name on those mailers because I would love to believe that Berardino was venting his righteous anger at the wrong candidate.  Yeah, right! The County’s public employee unions are going after Nelson because they are terrified of a real Board majority that will institute permanent and meaningful pension reform and conduct responsible contract negotiations.

But who knows? Someday maybe the OCEA will stand up to real corruption – even on the part of a Democrat. If they ever do they know where to come to get all the info they need. But I’m not holding my breath.

Over at the Red County blog yesterday Cynthia Ward properly went after the idiotic mailer the OCEA put out against Shawn Nelson for voting to preserve the Fox Theater.

Naturally, Matthew Cunningham, who is doing his usual shuck and jive for John Lewis to torpedo Nelson, decided to let Chief Union Goon Nick Berardino defend the flier in detail, and of course did his usual look-the-other-way routine as Berardino just made shit up.

Berardino defended his fraudulent mailer by claiming that Nelson received campaign contributions from The Morgan Group who was in negotiations to buy the Fox Theater. Then Berardino points out that (some years later) Nelson voted to approve a matching grant to the Fox Foundation for restoration, like there was some sort of connection.

If Cunningham weren’t working for the Lewis cabal to sink a real conservative Republican (Nelson) in order to promote a district-hopping, ignorant  assclown (Sidhu) he would have pointed out that the two things had absolutely nothing to do with one another; that the Morgan Group never had a stake in the Fox grant decisions and that the Fox Foundation that got the grant is a non-profit corporation that doesn’t give out political contributions.

Nick says he did his homework. Nick is a liar and a sack of Nigerian pygmy goat shit.

Oh, and by the way Nick, your flier included a big picture of the old Bank of Italy on it that has nothing to do with the Fullerton Fox.

If Nick weren’t so stupid he might soon come to discover that helping preserve the Fox Theater will win  a lot more votes than it will cost him. So keep it up, dummy. Just love the way you waste your members dues!