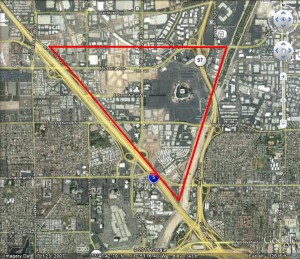 Harry Sidhu likes to blather on about jobs, jobs, jobs, but maybe he would be well-advised to remember that government shouldn’t be in the jobs business and that lots of things government does destroys jobs. Sidhu should know.

In Anaheim he’s been Curt Pringle’s right hand man in the (over development) of the much lauded, now ghost town like “Platinum Triangle.”

Pringle, Sidhu and Company changed the zoning to benefit the big developer who comes in and clears out lots of businesses who employ people in order to over build monster apartment and condo blocks. Where’s the outrage from Lucy Dunn and the OCBC when their golden boy Curt Pringle led this charge?  Who benefited from the loss of jobs, surely not the city of Anaheim.

The fact that Curt Pringle was employed as a lobbyist for Lennar while Lennar was buying up several industrial buildings in the Triangle while Curt and Sidhu were secretly planning to rezone the “Platinum Triangle” does not sit well now that the entire project is a flop, jobs are gone and the property is vacant, or a shit-load of condos are in default. Where’s the outrage Ms. Dunn? Can’t hear you.

If there ever was an example of what not to do in planning and business this is the model project for it.