Skip to content
Posted onDecember 4, 2009December 28, 2009Behind Closed Doors
by Mr. Peabody10 Comments on Get Rid of The Fair Board

Here is a very good column we came across today by Barbara Venezia. in light of some of the non-conversations we’ve been having here lately with a Fair Board supporter, we thought we’d share it.

Venezia: OC Fair Board should be removed

Why isn’t anyone calling for the removal of the current Orange County Fair Board? Doesn’t personal responsibility matter anymore? When you take into consideration the collateral damage they’ve caused with this ridiculous self-serving shell game of buying the fairgrounds, every single one of them should be held accountable, including the two who were not part of the nonprofit shenanigans.

When I asked board member Julie Vandermost why she wasn’t a part of it, she emailed, “It’s a matter of not having enough bandwidth in my schedule.” David Padilla didn’t return my call; rumor has it he wasn’t even asked to participate in the nonprofit. If true, you have to wonder why.

I’m not buying Julie’s clever excuse and David’s non-response speaks volumes. It doesn’t take a rocket scientist to figure out they were probably the first ones who saw something hinky in this plan. Why didn’t they speak up? Was it because they didn’t want to rock the boat and lose the lucrative perks of being on the Fair Board? Or were they afraid of the blow-back speaking against powerful fellow board members could bring?

Does personal responsibility go out the window if you just keep your mouth shut?

This Fair Board’s questionable behavior should be enough ammunition to explore removal. Let’s not forget they were smack dab in the middle of the Mike Carona trial with board member Debbie Carona. Then there was the whole messy ticket/private dinner scandal that some argued amounted to “gifts of public funds,” perks estimated at approximately $40,000 plus. When this was taken away, tongues wagged that 50 percent of the board considered quitting.

Now Costa Mesa’s setting aside beaucoup bucks to create a plan B, (making a bid to buy the fairgrounds), should plan A, (getting the governor to rescind the sale), not work. This exercise in futility could’ve been avoided had the OC Fair Board done their job and not lobbied for the sale or formed their own nonprofit to buy it.

When is someone going to talk about the elephant in the middle of the room? It appears this board is not looking out for the best interest of the public. Politicians generally hate going after those who fund-raise and have political juice, but what if they’re out of control?

Maybe it’s a task for Supervisor John Moorlach; after all, accountability’s something his office has preached repeatedly. Sure his administration’s taken its lumps as they’ve gone after some sacred political cows like pension reform, but whether you agree with them or not, this group seems fearless. It would make sense for Moorlach and company to lead this charge.

But will he? He’s gearing up for a tough re-election bid. Going after political heavyweights on the Fair Board could cause a rift within his party; then again, being pro-active on this issue could give him a leg up with voters. Wonder if he’s a gambling man?

Costa Mesa, coupled with the OC Board of Supervisors, could accomplish rescinding the sale and requesting new board members. So who’ll have the chutzpah to stand up for personal responsibility? We all should.

Amen, Barbara, and thank you for saying what no one in the Republican hierarchy has the courage to say. Clean the Augean Stable at the OC Fair. Even if we have to divert the Santa Ana River to do it!

END_OF_DOCUMENT_TOKEN_TO_BE_REPLACED
Posted onDecember 1, 2009December 28, 2009Chris Norby
by Mr. Peabody6 Comments on So Who Does The Red Bottom Blog Support in the 4th Supervisorial Race?

(Sung to the tune of “The Beverly Hillbillies” theme song.)

Come and listen to a story ’bout a man named Dick,
A rich senateer, with a veneer just like brick.
Then one day when he’s shootin’ for a blog,
His current zip code blew away all the fog.

While up in Sacramento a feller named Duvall,
Did some heavy breathin’ in the microphone for all,
To hear how he’s been rulin’ for the public right,
And spankin’ those lobbyists long into the night.

Well the first thing you know Dick’s wife has dyed her hair,
Their neighbors said, “Linda, move away from there!”
Up north in Fullerton’s the place you ought to be!”
So they’re packin’ up their bags, getting ready to flee.

Seems his wife wants to pick up where old Dick left off,
Livin’ high in Fullerton, feedin’ from the trough,
They’d like another house, if their landing can be soft,
A mansion, a bungalow, or even a loft.

So think about these tales when it come time to vote,
Makes it hard to swallow, like something in your throat,
If Dick and Linda try to make a power grab,
Let’s send ’em back to Irvine with their velvet carpetbag!

END_OF_DOCUMENT_TOKEN_TO_BE_REPLACED
Posted onAugust 4, 2009December 28, 2009Marijuana
by Mr. Peabody23 Comments on No Stems or Seeds That You Don’t Need

Recently Fullerton’s Redevelopment Director, Robert Zur Schmiede (who also serves on the planning commission for Laguna Beach) decided to channel his inner MD for an impromptu prescription to the Laguna Beach City Council to ban all medical marijuana dispensaries from the city. An OC Register article detailing the issue is available here, but here are a couple of noteworthy quotes:

“While acknowledging the needs of ill patients to access marijuana, I will not support — and will, in fact, vehemently oppose — the allowance of collectives in the city,” Commissioner Robert Zur Schmiede said.

“Why anyone with a grain of sense thinks this is something we should do is beyond me,” he added, to some murmurs in the audience.

Let’s get this straight:

Despite all that, he actively seeks to deny patients access to a drug that a licensed medical doctor has recommended for treatment.

Does Zur Schmiede really have the public interest in mind here? Can we expect this sort of reefer madness to echo in Fullerton? Or can we reasonably expect our city staff to uphold State law?

We have delved deep into our photo archives and have uncovered this image. And so continuing in the Robert Young leitmotif  we share it with our Friends.

The other day I took my elementary-age children to Cafe West for a cool drink, and found this postcard on the counter: 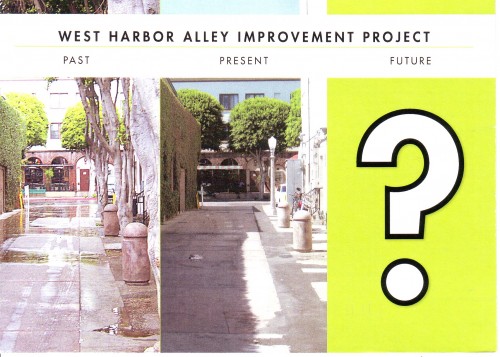 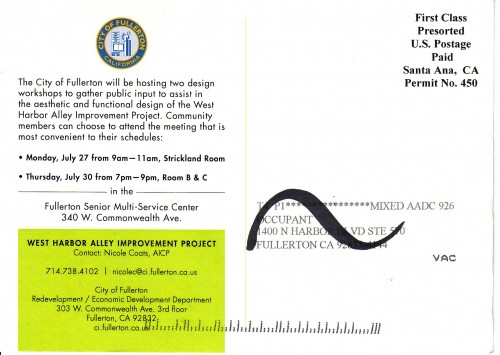 The triptych above seems to reflect a strategy all too common in the city:

To most of us, this would seem a bit like putting the cart before the horse, but one has to wonder if the RDA sees it that way.

What’s the mystery here? For goodness sake, this is just an alleyway, all they’ve done is yank out a few trees!  What kind of “design” is required here? Talk about making a mountain out of a molehill!

My own kids provided some helpful suggestions as to what to do with the freshly vacated space in the alley. One of them thought a modern sculpture would be appropriate, while the other mused that perhaps another luxury apartment complex could be squeezed into that tiny space. Hey, where there’s a will, there’s a way.

However, given Fullerton’s recent trend of rolling out the red carpet to the bar scene, perhaps a European-styled “pissoir” could not only provide a visually attractive option, but one that’s functional as well.

True, a few fumes may greet the occasional pedestrian walking through the alley, but this would be one project the RDA could actually claim where form follows function.

This triptych seemed to reflect a strategy all too common in the city:
END_OF_DOCUMENT_TOKEN_TO_BE_REPLACED