A while back some anonymous Friend dropped off what appears to be leaked financial statements from Rusty Kennedy’s non-profit, the Orange County Human Relations Council. The files didn’t receive much attention from FFFF at the time, but this week one of our readers recently pointed out Rusty has been down at the county begging for a new $250,000 infusion to fund additional employees for his private non-profit.

OK, let’s take a look at his financial statements. If you believe that this leaked budget is authentic (I do), an additional $250,000 per year from the county taxpayers would conveniently cover the Council’s projected loss for 2016.

Now that’s not very good, is it? Running a non-profit at a 20% annual loss is cause for concern. But of course this is a private 501(c)(3), so that’s normally a problem for Rusty’s private board members to worry about.

Or is it? What if Rusty is groveling for cash at the county just pay for existing expenses, rather than hiring the three new people as promised? The group already receives substantial funding from the county and local cities. Why should the county give more money to a group that can’t balance its budget? Furthermore, it’s hard to tell if there’s any real value in Rusty’s services, or if his organization offers any sort of efficiency. Program expenses aren’t identified in this budget at all. Why not?

Here’s one clue hidden within the documents: Salaries, Benefits, and Payroll Taxes account for 98.1% of their budgeted revenue. With salaries eating up the entire budget, one might wonder if this whole operation isn’t just some make-work project for Rusty and his friends. 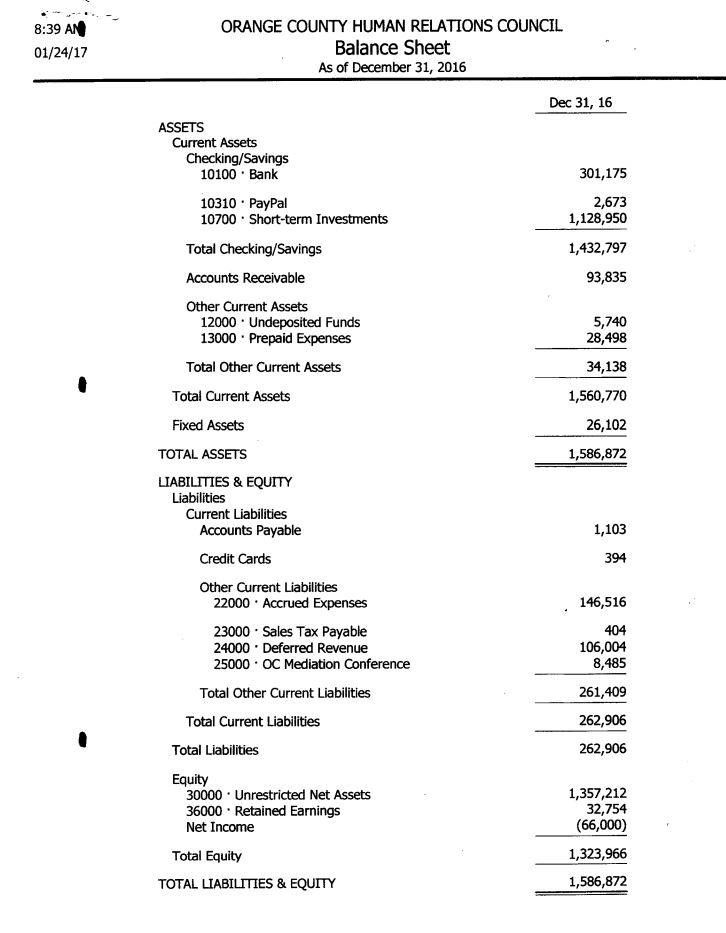 There’s one more concern. Rusty has collected a lot of donations over the years by pretending that his non-profit is actually an empowered county agency. Many of his donors are misinformed, which is why the county recently insisted he stop using the county logo and misappropriating  the name of the similarly-named Orange County Human Relations Commission. Furthermore, there is at least one board member who hold seats in both organizations – a glaring conflict of interest that the county has yet to resolve.

Altogether, these documents paint a pretty dim picture for Rusty’s personally lucrative public/private amalgamation. Will county supervisors continue to dump money into Kennedy’s opaque and unaccountable mess of an organization? And how much are individual OC cities paying into Rusty’s perpetual self-employment apparatus? Do Orange County residents receive any real value from this public/private partnership, or is it time to scrape this useless barnacle off the county barge? 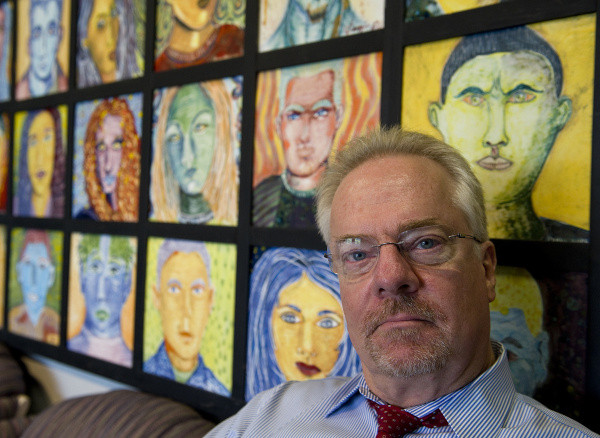 Here is the Director of  the OC Human Relations Council, Fullerton’s own Rusty Kennedy (in a letter to his sister’s Fullerton Observer)  simultaneously congratulating himself and his fellow professional do-gooders,  boot-licking the County Supervisors who will soon reflect upon the merits of Kennedy’s operation, and of course, denigrating all the citizens who are rightfully concerned that having several hundred homeless people imported into the vicinity of their homes, schools and businesses are misguided, etc., etc. 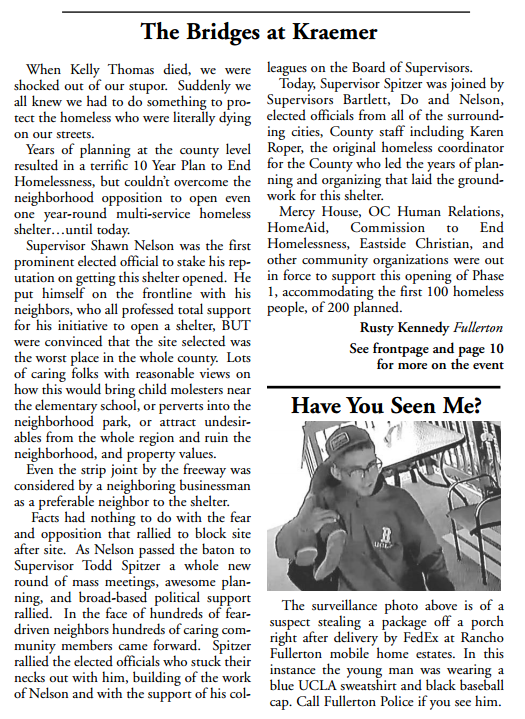 Of course none of this semi-literate screed is surprising. In fact it’s all old stuff – particularly the nauseating part about the death of Kelly Thomas being some sort of wake up call. From the very beginning of that saga, Fullerton’s old guard liberals were determined to make the death of Thomas at the hands of six FPD goons a homeless issue, instead of what it really was – the worst example of a police department mired in corruption, incompetence and denial.

For Rusty Kennedy in particular, this distraction was essential and based on his own self-interest. Kennedy’s crew collects income from local police departments who “partner” with him in the aftermath of one of their outrages, ostensibly to calm troubled waters, until the next crisis. He relies upon police chiefs to recommend him and his “council” to be the County’s operator of another useless organization: the OC Human Relations Commission. And that contract is reviewed periodically as part of the County’s frugality theater kabuki. 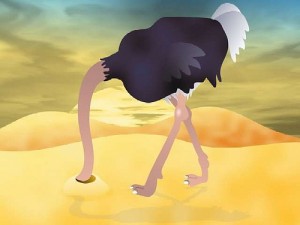 We may not always have agreed with the liberal activism of Fullerton’s Ralph Kennedy, but there’s no doubt that the engineer-turned-civil-rights-activist was the real deal – a committed believer in social justice who was willing to take unpopular stands on behalf of the causes for which he advocated.

In its obituary of him in 1998, the Los Angeles Times wrote: “He was one of those rare people who saw things as they should be. He wasn’t willing to sit in his comfort while others in the world were suffering. He always felt like he needed to dig in and do something to bring about justice, to take action, to risk his own comfort in order to make things better.”

But Kennedy’s two children – Sharon Kennedy, who is publisher of the Fullerton Observer, which Ralph and his wife, Natalie, founded in the 1970s; and Rusty Kennedy, head of the Orange County Human Relations Commission, which claims to advocate for concepts similar to those advocated by the elder Kennedys – are frauds. Their actions (or inaction, really) following the brutal slaying of Kelly Thomas by Fullerton police thugs shows how they have become lapdogs for the political establishment, which is the very opposite of the behavior displayed by their Dad. Unfortunately, modern liberals usually defend government power and abuse — they don’t stand up for the poor and downtrodden any more.

The Observer has run various news stories about the Thomas killing at the hands of cops, but the stories read like articles hatched in the Fullerton PD’s press department. There is no sense of outrage and an unconscionable reliance on official explanations and official sources. (It’s as if Ralph Kennedy, known as a crusader against housing discrimination, took at face value the official government explanations of why black folks were treated as second-class citizens in the old days. “Don’t worry, folks, Gov. George Wallace and his able team of government officials will get to the bottom of it!”) The Observer, promoting the lame efforts of Rusty and his commission, runs a story that declares: “The Orange County Human Relations Commission is responding to community requests for help in the tragic beating death of Kelly Thomas. On behalf of the Commission, Rusty Kennedy endorsed the idea of an outside, independent investigation of police practices and procedures in the case and more broadly across the department. He gave City Manager Joe Felz an evaluation of Michael Gennaco for the LA County Office of Independent Review. The Commission has worked with Gennaco in hate crime cases and most recently in setting up an OIR in Orange County, which is now staffed by Stephen Connelly, one of Gennaco’s proteges.”

The Observer and Kennedy should be denouncing this brutal attack as a hate crime and staging sit-ins and other demonstrations. Instead, they are joining the official whitewash and telling us to trust these not-so-outside investigations. Connelly has not produced a single serious investigation since he became the head of the supposedly independent commission that operates basically at the behest of the Sheriff. You might as well ask Dick Jones to produce an outside investigation.

Fortunately, this blog is filling in the role that lapdog players such as the Fullerton Observer play. Fortunately, Orange County residents are starting to learn that the Human Relations Commission is a way for limousine liberals to live large on other people’s money while pretending to stand up for the principles that true liberals such as Ralph Kennedy actually stood up for.

END_OF_DOCUMENT_TOKEN_TO_BE_REPLACED
Posted onJune 16, 2010August 15, 2011Boohooism
by The Desert Rat16 Comments on The End May Be Near for Rusty Kennedy’s Human Relations Commisssion 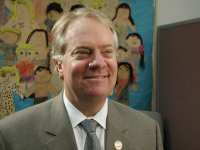 Talk about a hold over from a different era. No, not Rusty Kennedy (above), but the OC Human Relations Commission that has given him employment for Lo these many years.

But the final curtain may be about to ring down upon a typical 1970s “feel good” venture –  a government operation that has no specific metrics for performance and no objective criteria for success. In other words, a typical lefty government program.

At their preliminary budget hearing on Tuesday, the Board of Supervisors broke 2-1-1 on whether to keep this dinosaur around any more. Nguyen and Campbell who seem to want to cater to the unquestioning liberal vote want to keep this dinosaur; Campbell, whose adherents describe as conservative, was actually moved to tears by the very though of it. John Moorlach voted no. Pat Bates abstained for reasons that only Bates could possible explain.

Which means that when he votes on June 29, Shawn Nelson’s first budget decision may well involve pulling the plug on the comatose patient. Well, we say do it. Do Not Resuscitate!

END_OF_DOCUMENT_TOKEN_TO_BE_REPLACED
Posted onAugust 24, 2009August 15, 2011Pam Keller
by The Fullerton Shadow44 Comments on Some Information About “The Fullerton Collaborative”

Pam Keller likes to talk a lot about her role as Executive Director of something called The Fullerton Collaborative. We didn’t use the word “job” because we’re not sure yet how much actual “work” goes into the function.

We do know that the Collaborative seems to be run by, and for the principle benefit of Pam Keller herself.

Here is the first page from the Collaborative’s 2007 tax filing: 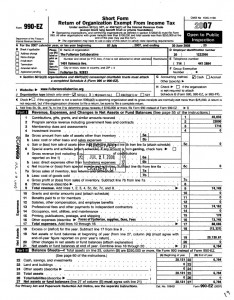 Note that the Collaborative’s expenses exceeded its revenue by 13k, covered by a surplus from the year before. Notice also that the corporation’s address is the same as the Fullerton School District’s headquarters on West Valencia Drive. This latter fact is explained on page 4: 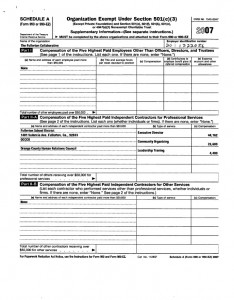 The Collaborative has an agreement with the FSD to provide an “executive director”  for 44K. That’s Keller. The only explanation for this is that this way Pam gets to remain an FSD employee with salary and benefits thereof, while doing her good works and self-promotion as a professional do-gooder on the taxpayer’s dime. Instead of a telling folks she’s a public employee, she gets to pretend that she’s the employee for a 501(c)(3) non-profit organization.

Notice that the cost of Pam is the Collaborative’s main expense in 2007. The only other significant expense is a $26,000 contract with something called OCCO for “community organizing.” Rusty Kennedy’s do-nothing Human Relation Commission is in on the gravy to the tune of $4400 for “leadership training,” whatever that may consist of.

Since Keller is listed on the Collaborative’s website as a board member, we wonder whether she’s actually negotiating and voting on her own contract with the FSD. The dialog in the room during those discussions might be fairly amusing. And we also wonder if anybody else on the board is auditing that relationship for vendor performance management. Hmm.

We are a bit curious as to why public funds are being sluiced through this rather elaborate piping in the first place. And we wonder, given the fact that FSD Board member Minard Duncan is listed as a “member-at-large,” how closely the FSD negotiates and manages that contract itself. There is something called The Government Accounting Standards Board; are their rules being adhered to regarding accounting and public disclosure of their financial relationship with The Collaborative?

Of course we are also very interested in where The Fullerton Collaborative gets its funds, especially which private donors, if any,  are contributing the wherewithal to cover the FSD contract that pays for Fullerton City Council woman Keller’s services. The Collaborative’s website is strangely silent on the identity of its donors; most charities boast about their benefactors, who generally like to be boasted about.

When we find out we’ll be sure to  share the information. And if we can’t find out, we’ll let let our Friends know that, too.