Enjoy these two clips that feature an exchange between County Supervisors Shawn Nelson and Janet Nguyen. The issue is pulling the plug on the moribund Civic Center Joint Powers Authority, an agency that was created when Lyndon Johnson was president, and that has served no legal or practical function for almost ten years.

You would think that supposed “conservatives” would pile on to the opportunity of killing a government entity, especially one that doesn’t do anything. Well, you would have to think again. Just listen to the drivel that escapes the Board Chair’s lips and dribbles down her chin. Ay, ay, ay!

Okay, this isn’t about Fullerton – not directly, anyway, but Janet Nguyen is indeed the Chair of the County Board of Supervisors. And we’re in the County.

Our Fringe Friend Gustavo Arellano has passed along an invite to Ms. Nguyen’s August fundraiser at the OC Weekly with the usual mordant commentary. Depending on the amount you give to her you will be classified:

WTF? You can be a “bamboo?” Or two? Then comes the “Empress” and “Emperor” sponsor level. Sweet Baby Emanicipator! Okay, the comestibles are some sort of Asian fusion blah-blah-blah, but this is America fer chrissakes!

How about a Mandarin level for a hundred bucks? Or a coolie grade for 50 dollars or less?

END_OF_DOCUMENT_TOKEN_TO_BE_REPLACED
Posted onMarch 16, 2010March 16, 2010Behind Closed Doors
by Mr. Peabody20 Comments on Word From The Empress: “We Are Not Amused”

Apparently my ongoing exploration into the encroachment of County 1st District Supervisor Janet Nguyen into the management of the 4th District office has created some angst on the Hall of Admin 5th Floor. Apparently Her Highness is displeased with the revelation that she has hired 3 new people to occupy that office even though there is no supervisor there. She has been snooping around to find out where the “leak” is.

Leak? Why is Empress Nguyen concerned about news of her doings leaking out? Is she trying to hide something?

After all, the Imperial story has been that these additional people are needed to help inform all us poor, ignorant denizens of the 4th District learn all about the wonderful County programs available to make our lives ever so much better. Ferchrissakes you’d think she’d issue a press release, right? But no! Maybe she’s worried about being perceived as a manipulative, scheming empire builder.

She has reason to be worried about that.

END_OF_DOCUMENT_TOKEN_TO_BE_REPLACED
Posted onMarch 15, 2010March 15, 2010Behind Closed Doors
by Mr. Peabody7 Comments on Janet Nguyen Is At It Agin’!

A few days ago I related how Board of Supervisors Chair Janet Ngyuen had hired a couple of people to occupy Chris Norby’s former 4th District office. I opined that it seemed like a real extravagance given the fact that there was no supervisor to support, and likely diminishing “constituency work” since there was no supervisor to direct and approve it. Also the replacement election is just a short 10 weeks away.

I also speculated that perhaps Nguyen was just placing her people inside the office to report back directly to her; and perhaps that she was embedding her personnel in the office in the unlikely event of A Sidhu victory in June. Did Nguyen make a deal with Sidhu to keep these people employed later? Just wondering.

The latest word from several sources is that Nguyen has hired yet another person to work in the 4th District office and that this person started today. Good grief, this is ridiculous. One of those sources informs us that Nguyen’s explanation for this idiocy is that “her” people are there to help make sure folks in the 4th District are aware of all the programs the County offers them. Oh, really?

Frankly, none of the explanations make Nguyen look like anything other than a devious empire-builder.

She should keep her hands off the 4th District. She has enough trouble in her own.

Some dude named Chris Prevatt at a blog called “the Liberal OC” has decided to pass along that ludicrous piece of spam mail “hit-piece” we posted about yesterday – sent all the way from India!

It seems Prevatt is taken with the fact that Sidhu’s Mumbai Marauders have discovered the horrible truth about Nelson: he’s gotten three traffic tickets since (gasp) 2003! Prevatt seems to think he deserves his own wing at Corcoran State Prison.

A little digging uncovers what’s going on here. Prevatt is a County worker who once had his computer taken away for blogging on company time. He is also what is known as a “Jannie,” one of the pathetic creatures that Janet Nguyen discovered under some rock or other and put to work in her PR salt mine.

Here’s the connection: Nguyen has recently endorsed the completely unethical carpetbagging scampaign of Harry Sidhu, fake addresses and all; and we’ve been questioning why Nguyen is putting on additional staff in Norby’s former office where there is no supervisor. The Register’s Jennifer Muir picked up on this and started asking questions. Nguyen is no doubt pissed off at being outed.

Prevatt leaps into the breach by passing along Sidhu’s comically pathetic attempt to attack Nelson for traffic tickets! Hoo boy! Petty and silly? Stupid and ineffectual?  Of course. What do you expect?

Say, what is the Democrat equivalent of a “repuglican?”

END_OF_DOCUMENT_TOKEN_TO_BE_REPLACED
Posted onMarch 9, 2010March 9, 2010Behind Closed Doors
by Mr. Peabody8 Comments on Maybe the Register Should Just Put Us on the Payroll 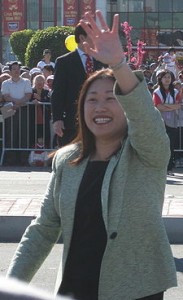 Yesterday we related how Board of Supervisor Chair, Janet Nguyen, Supervisor for the 1st District, has taken into her noodle to employ two new folks in Chris Norby’s former 4th District office – even though there is no supervisor there.

Now we are informed that the OC Register’s Jennifer Muir was calling around the Hall of Admin later in the day and asking about the new staffing arrangements.

Geez, pretty soon the Register may just have to give FFFF its own column.

On his way out the door to yet another government job in Sacramento, 4th District County Supervisor Chris Norby paused just long enough to cast a vote at yesterday’s Board of Supervisor’s meeting to support the asinine expenditure of $350,000 on some sort of Viet Nam memorial in a little-known Midway City park.

Forget the fact that there are already two memorials to the war and to the subsequent diaspora in the vicinity; and forget the fact that times are tough and the County is in severe budget cutting mode; but ask: why on the Green Planet Earth should the taxpayers hand over a third of a million bucks to some kind of private “community culture and performing arts society” to design and build what is described as an interactive wall/memorial of some sort. This is the sort of thing that is routinely developed and built with private fund raising.

The whole concoction was the brain-child of Supervisor Janet Nguyen, obviously for political capital. The County Parks Director, some guy named Mark Denny, seems to have gone along without a whimper. We found out that he’s a former staffer to one of the other zeroes that voted for this – Bill Campbell – so no surprise there. The other aye vote on the Board was the clueless septuagenarian Pat Bates who, like Campbell,  is not known for adherence to any conservative principles. To his credit, Supervisor John Moorlach voted no.

Which brings us back to Norby, who, at his last Board meeting, could have reminded people what he has always claimed to stand for – and often has. But he didn’t.

Good bye and good….well, you know.