Skip to content
Posted onFebruary 23, 2012A Step in the Right Direction
by Joe Sipowicz43 Comments on Real Leaders Lead

Enjoy the rare sight and sound of an elected Fullerton leader actually leading.

Please note the not so subtle threat: the tyranny of the Three Dead Batteries, Bankhead, Jones, and McKinley is exercised to deny an elected official – Whitaker – access to public records and public property; and their own stupid intransigence is forcing their dereliction directly into the political arena.

Not surprisingly, the Three Stagnant Ponds are backed up by Attorney Richard Jones who, incredibly, wants the people of Fullerton to believe the authority of the Council derives from – the Council itself!!

That’s the kind of Divine Right bullshit that inspired the American Revolution. The Three Hollow Logs no doubt find comfort in that sort of tyranny. And that’s exactly why we are having a recall.

END_OF_DOCUMENT_TOKEN_TO_BE_REPLACED
Posted onFebruary 22, 2012February 22, 2012A Step in the Right Direction
by admin66 Comments on In Search of Leadership, A Floundering Fullerton Finally Finds It

FFFF’s own Travis Kiger, a member of the City’s Planning Commission hit a home run last week in his comments about the proposed high-density government subsidized housing project on W. Santa Fe Avenue in downtown Fullerton.

END_OF_DOCUMENT_TOKEN_TO_BE_REPLACED
Posted onJanuary 24, 2012January 24, 2012A Step in the Right Direction
by The Fullerton Harpoon24 Comments on We Get Mail: Oh Yeah. We’re Keeping Up The Pressure

We just received this e-mail from a nice lady who recognizes the contribution of FFFF and Kelly’s Army in regards to the way the Fullerton police interacts with mentally ill folks.

Subject: keep up the pressure

I would like to thank you and Ron Thomas for all your efforts.  I am the mother of a mentally ill son who just recently (Dec 4, 2011) had contact with Fullerton PD due to his illness and the way it was manage was amazing and human.  They actually contacted his father for assistance with him and to get a better understanding of his history. I truly believe this is a result of the actions Ron Thomas and you are making.  Thank you doesn’t even begin to cover it.  Although I personally am not a citizen of Fullerton, I want you to know that I think what you are doing matters and hopefully spreads to get the kind of changes that are need when Police are dealing with mentally ill people.  I know I am becomming more active in those changes in the small ways that I can.  Keep up the pressure and the good work.  This is one mother who thinks you are heroes.

How many tens of thousands of dollars of Pat McKinley’s pension bucks have Anti-recall leaders “Dick” Ackerman and Dave “Dick” Ellis squandered so far?

Uh, yeah, right. Those were the cards wishfully cast out, blindly, into a sea of possible Recall signatories. The idea was that some folks would take back their recall signatures when they learned what a monster Tony Bushala is.

The “flood” turned out to be more of a trickle that evaporated before it could even form a puddle.

Now that signatures have been submitted, we also know the fruits of Dick Ackerman’s campaign genius: 145 cards returned for each of the Three Dithering Dinosaurs. 145. And many of those are the names of dead jazz musicians, infamous criminals, and assorted fictional movie characters living at impossible addresses.

Consider that when compared to over 17,000 signatures gathered for the Recall on each of the Ossified Fossils and you will understand the breadth and depth of the Anti-recall failure. And be sure to recall Pat McKinley’s winning margin in 2010 – 90 votes.

How many tens of thousands of dollars were wasted on the Anti-recall  mass mailing efforts? I don’t know. But I suggest that if you want to find out, you inquire of the experts in wasting our money: Bankhead, Jones, and McKinley.

END_OF_DOCUMENT_TOKEN_TO_BE_REPLACED
Posted onJanuary 13, 2012January 13, 2012A Step in the Right Direction
by Joe Sipowicz123 Comments on Is Dad Taking Car Keys Away From Goodrich? 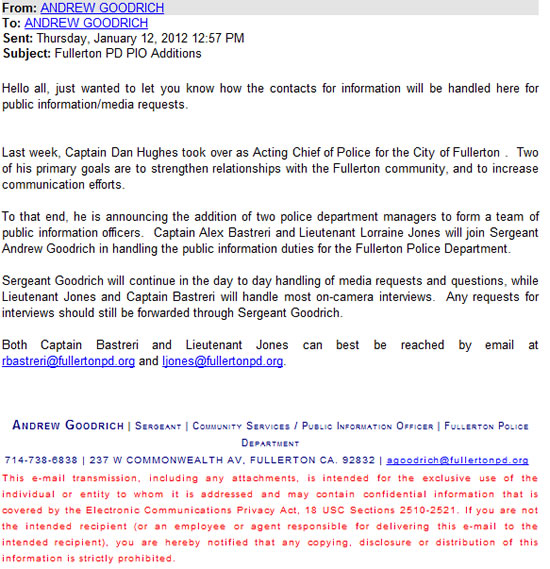