Last night the Water Rate Study Ad Hoc Committee voted unanimously to recommend to the Fullerton City Council that the “in-lieu” franchise fee, or “water tax” as it has become known as, should be suspended indefinitely. 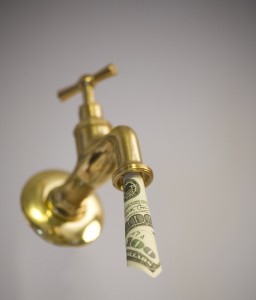 Another motion was made to recommend an audit of the Water Fund. The motion failed 5-5.

Some members stated they had enough reports and felt spending more money would not provide any answers. One member even said that no matter what is discovered in the audit, it would not be enough for some.

Others, like myself, feel it is a disservice to the public to not account for the misappropriated funds. As we look to answer the question of how much was overcharged to ratepayers, we realize we cannot arrive at a fact-based answer. Instead, the city’s staff will have the Ad Hoc Committee look at what could or perhaps should be charged to the Water Fund. That may be an appropriate step going forward but without an audit we will never know where our money went.

Water System Manager Dave Schickling offered up the City’s Comprehensive Annual Financial Report as an audit that covered the Water Fund. Unfortunately, the CAFR does not look at the Water Fund in any detail. Instead, the accounting consultant was provided total dollars into and out of the Water Fund. This may show that the Fund is operating in the black but does nothing to ensure that the transfers were legal or that the funds were used in support of water projects and system management.

I asked the Director of Engineering, Don Hoppe, and the Water System Manager, Dave Schickling, about how Maintenance Services bills their time to repair water leaks and the street that they dig up. They said the time is all billed to the General Fund. At the May 23, 2011 meeting the Water Rate Study showed that Maintenance Service accounted for 21% of the operations and maintenance of the water system. This created some confusion, at least for me, because the Rate Study showed these maintenance costs as being part of the allocation from the Water Fund and not part of the franchise fee. In the end, I am left to guess where at least $22.5-million was spent.

The chart below shows that Maintenance Services expenses accounted for 21% of the O&M expenses, “Other Expenses” as 2% (read the footnote on the chart to see what “other” refers to), and then the Franchise Charge at 11%. According to the City, this chart represents all of the costs and expenses necessary to operate the Water System and consequently the Water Fund. 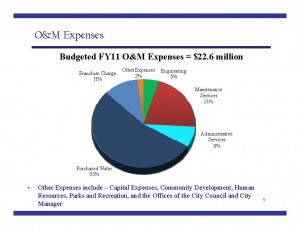 City Manager Joe Felz will be compiling what he believes to be a list a various “costs” to bring back before the Ad Hoc Committee. The purpose would be for the Ad Hoc Committee to determine what “costs” are appropriately associated with and billed back to the Water Fund.

The Ad Hoc committee seemed somewhat unified in a desire to have only the actual costs billed to the Water Fund, but as we have seen, those “costs” are subject to staff interpretation.

Since last night’s meeting, many members have expressed their concern over the way the entire Water Rate Study has been handled.

I think a large part of the problem has been the business-as-usual approach by staff to have a committee rubber stamp studies, reports, and recommendations all at the behest of city staff.

That’s not to say the process yielded no results. In fact, early in 2011 I made it my goal to end the water tax. Last night, the first milestone was reached with the Ad Hoc Committee’s recommendation.

As a final thought on water rates and the City’s handling of this issue, I want to draw your attention to the City’s Budget Study Session tomorrow. The purpose of the meeting is for the City Manager and department managers to present their respective budgets. This is where we find out how much of our money the City would like to spend and where they will spend it. Even though the Ad Hoc Committee recommended that the City Council end the water tax completely, the City Manager, Joe Felz, intends to move the budget forward on the assumption that the General Fund will continue to receive a percentage of the Water Funds revenue. So you see it is business as usual at the Fullerton City Hall.