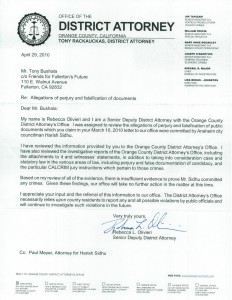 We finally heard back from the District Attorney on the matter of our complaint that Harry Sidhu committed perjury and fraud when he swore on voter registration forms (twice) that he lived at the beautiful Calabria Apartments – instead of his “Elegant Yorba Estate” in the 3rd Supervisor’s District.

Their “investigation” (if you want to call it that) concluded that “there is insufficient evidence to prove Mr. Sidhu committed any crimes.” Hmm. Apparently statements from Calabria residents saying they never saw Sidhu there and that the apartment had been empty for a year weren’t persuasive to a DAs office that habitually ignores funny business perpetrated by politicians. Still, it’s important to remember that nobody at the DAs office is in any way saying that there is evidence that Sidhu did live there. So no exoneration for Hide and Seek.

Well, it wasn’t as if anybody really expected Tony Rackaukas’ department actually to do anything, so there’s no reason to be surprised.

Still, the fact are inescapable. In his insatiable hunger for elective office in a district in which he doesn’t live, Harry Sidhu cooked up a fake address in a crummy apartment on Lincoln Avenue in West Anaheim next to a pool hall, and lied about it on voter registration forms – twice.

Ironically, we see  at the bottom of this letter from the DA that ol’ Hide and Seek Sidhu employed one of those evil defense attorneys his supporters are always railing against. But they can come in handy can’t they?