At Saturday’s protest of the hapless Fullerton Police Department, some perceptive folks espied a character who immediately drew suspicion, sore thumb-like, as some sort of plant. Of course they challenged this individual, who, thoughtfully provided a business card.

FYI, an aardvark is a homely creature that roots through the dirt for bugs which seems aptly descriptive; the use of the name could also be a tactic just to get to the front of the phone book.

Our Friends discreetly followed Mr. Fury for several blocks down Commonwealth Avenue before he doubled back and wandered into – the FPD HQ! So what gives? Did the cops employ this clown to spy on peaceful protesters? If not why was he there?

I note that on their website that Aardvark “featured partners” include Safariland, the company that McKinley worked with (on the taxpayers dime) developing his special vest that was later purchased by the Fullerton Police Department. Aardvark is an “authorized dealer” of Safariland equipment. Did McKinley and the anti-recall drones employ this guy to take pictures of scary members of Kelly’s Army? If not why was he there, and why the loop-de loop?

I think somebody in authority (now who would that be?) needs to inform the police that the FPD facility is owned by the taxpayers (us) and that they had better stay out of politics on public time (ours) and in a publicly owned facility (ours).

The protest continues with increased intensity.

We’ll be there from 9 am to 3 pm in front of the police station on Commonwealth Ave. For you out-of-towners, come to the intersection of Highland Ave and Commonwealth. Exit 91 Freeway at Harbor Blvd. go north two miles and turn left at Commonwealth Ave. Go two blocks west. See you there!

END_OF_DOCUMENT_TOKEN_TO_BE_REPLACED
Posted onAugust 5, 2011August 20, 2011The Crime Beat
by Travis Kiger228 Comments on Saturday’s Protest Will Be The Largest Yet

There’s another rally in front of the Fullerton police station on Saturday to seek justice for the police beating of Kelly Thomas.

I’ll bet we will have upwards of 1,000 participants this time. See you there. 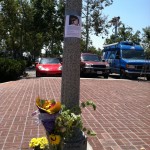 There will be a memorial rally and protest outside of the police station from 9:00 AM to 3:00 PM today (Saturday). Please come by and make your voice heard.  We must let the FPD  know that we will not let up until those responsible are brought to justice.

Also there will be a candle light vigil for Kelly tonight from 8-10 pm in front of Fullerton City Hall …no signs, just candles and songs

FFFF Friend Andy Anderson has organized a second protest that’s scheduled for tomorrow morning at 9:00 am to 1:00 pm on the corner of Highland and Commonwealth in Fullerton.

If you can, bring a poster board and make a sign on site. This is your opportunity to send your own personal message to the FPD letting them know what you think of the brutal killing of a local homeless man named Kelly Thomas.

There is a Facebook page to help organize the event.