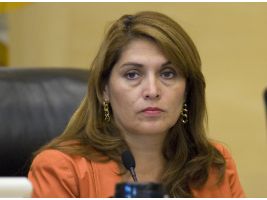 I was struck the other day by a post on the Voice of OC(EA) about Sharon Quirk that started out with Q complaining that there is now a target on her back by the GOP who want their Republican seat back. The rest of the post is the typical mush-drivel we’ve come to expect of the local media so I’ll let that pass.

What intrigued me was the absurdity of making yourself out to be a target by the very sorts of people who got you elected. What am I talking about? Check out this post from OC Political. Quirk got almost $300,000 funneled into her campaign account over the course of 18 days – laundered through various county Democrat Central Committees, including obscure Del Norte County – 800 miles away.

As expected, a lot of it came from public employee unions. But a lot of it also came from giant corporations like AECOM, Blue Shield, AEG, and of course, our good friends at Disney. So it would appear that Quirk was obviously looked favorably upon by these corporate behemoths, despite their subsequent attempts to distance themselves from their odd gifts to distant Democratic County Central Committees.

Which brings me to the point of this post.

The whining lefties are forever complaining that the lavish benefits, pay and massive pensions showered upon public employee unions are somehow a necessary counterbalance to all the misfeasance and excessive compensation of those greedy private business exec bastards. Of course it was always a false choice, but that falsity has never been made clearer by the fact of big corporations bellying up to Quirk’s bar.

The fact of the matter is that big corporations like big government. They are comfortable with it; they profit from it. Whether Republicans or Democrats are at the helm matters not a whit. Think big corporate subsidies, tax loopholes, and onerous regulations that chase small businesses out of business and you will start to get the picture. Big business likes balanced government budgets, and if that takes raising taxes on the rest of us, so be it. The very last thing they want is a small government advocate like Chris Norby. Think OC Business Council and you will understand that these people have no interest in anything other than a smoothly run plantation. You and I are the coolies that make the thing run for the benefit of our overseers.

Or to put it another way, the public employee unions and the big corporations both regard the taxpayer the same way: we are just pigeons to be plucked.

It’s actually rather amusing that Sharon Quirk is trying to gin up sympathy for her re-election against the big, mean Republicans, even before she is sworn in. Her dim-witted supporter may fall for that. She really doesn’t have anything to worry about.

269 Replies to “Sharon Quirk, Poor Little Rich Girl and The Myth of the Union/Corporation Dichotomy”