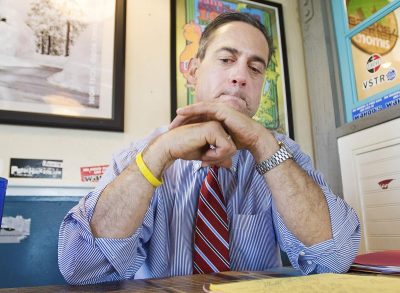 In case you haven’t heard by now, the Orange County District Attorney’s Office which is led by Todd Spitzer, filed a peeping charge against Fullerton Police Officer Jose Paez for filming up the skirt of a 16 year old student.

Let that sink in for a moment. A 16 year old, who Paez was on campus to protect, was his victim under color of authority.

According to the case information the violation date was 11/03/2017 and according to the FPD press release it was found by accident while investigating something else. 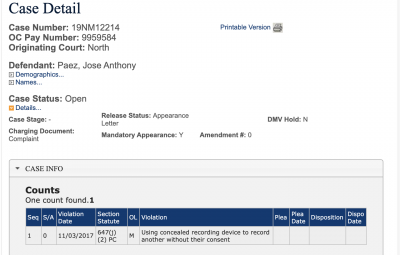 Based on the Body Worn Camera audit conducted by FPD we know that Paez also attempted to film up a teacher’s skirt on 08/29/2017 which shows a pattern of behavior.

He also had underage sex videos and photos on a phone in his possession. Apparently chain of custody at FPD, regarding Child Pornography, is so lax that they don’t know who has it on what devices or where it’s stored.

To further complicate the issue, Paez was allowed to schedule deletion of his own Body Worn Camera videos.

Taking into account the potential charges such as peeping on teachers and underage students and possession of child pornography on his phone it seems unprofessional that Fullerton PD wouldn’t contract this case out to another department or agency. This ins’t a case of policy violations to be investigated by Internal Affairs but rather it is one of potential criminal conduct against children under color of authority. The community and students at FJUHSD deserved an objective outside source to look into these issues.

This is something they did not get because Fullerton put their perv officer first and the wall of silence stood still. Not a single officer came forward about Paez. Not a single council member. Not a single school board member. An officer was allowed to prey on our children in his capacity of School Resource Officer and the protected status of the police was more important than public notification.

Thanks to the DA only levying a single charge dating to almost two years ago this smells more like another case of FPD being caught with their pants down than actual due diligence. The priority doesn’t seem to be in protecting our city and our city’s children despite all of the attaboys Chief Dunn gave himself in his Press Release on the issue. 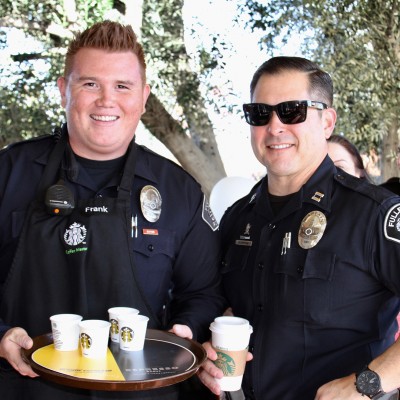 What stopped Paez from sharing nude photos of your daughters with his friends and co-workers? What’s to stop his replacement from doing the same?

Nothing and that’s how FPD likes it so shut up and go back to sleep. They’ll make this go away like so many other cases of criminality by their own in blue and then have the audacity to ask for a raise which council will give them.

This is the upside-down world we live in where justice consists of a press release followed by a likely plea deal where a pervert with a pattern of behavior of preying on women and children while under the color of authority will be allowed to walk with barely a slap on the wrist.

Spitzer is continuing the efforts of his predecessor who refused to file charges against Fullerton Officer Rincon despite groping women in his patrol car during traffic stops. A pattern that consisted of letting off Fullerton Officer Christopher Chiu who forced a naked women to stand for him so he could shine his light up her crotch and then ask for her number.

Sexual predation seems to be A-OK behind the Blue Wall of Silence supported by the brass at FPD, City Hall and the DA’s Office.

We all knew, based on the Jailhouse Snitch program, that there was seemingly nothing the Orange County District Attorney’s Office wouldn’t do to protect bad cops but now that includes downplaying sexual crimes against a School Resource Officer. All to protect a pervert in blue.

When did FPD send the case to the DA? How long did they sit on the Paez problem? Was he fired or was he allowed to quit? Chief Dunn won’t tell you. Did FPD or the DA even ask for potential victims to come forward or were they too worried about the bad press they’d get by possibly uncovering a #PaezMeToo problem they ignored for at least a year?

Meet DA Todd Spitzer, same as DA Tony Rackauckas – a hero for self-proclaimed heroes and nobody else.