It was bad enough when we learned that Fullerton Officers had (have?) no oversight in how they themselves are allowed to categorize videos and schedule them for deletion. Do something wrong like the litany of SB1421 criminal cops? Just change the category to delete the videos and nobody is the wiser.

It was worse that we learned that in the context of Fullerton Officer Jose Paez perving on High School kids and teachers while on the job, including for allegedly shooting video up a 16 year old’s skirt for which he’s being prosecuted.

But it turns out that Fullerton cops label their video files wrong 60% of the time according to Chief Dunn himself: 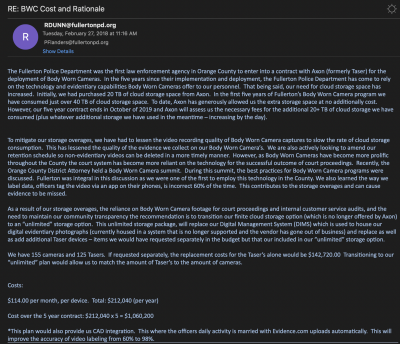 “We also learned the way we label data, officers tag the video via an app on their phones, is incorrect 60% of the time.  This contributes to the storage overages and can cause evidence to be missed.”

So when officers aren’t just deleting the videos of their criminal activity, such as Paez did, they’re potentially missing evidence for cases by simply not doing their jobs correctly.

The guys and gals in blue whom we pay the vast majority of our budget to can’t manage to tag a video properly for evidence – when evidence is quite literally one of the most important aspects of their job.

Guess they need more training and raises to justify that training. Bring on Fitzgerald’s taxes to solve this pernicious police problem. Just kidding. We’re paying for software (CAD integration) because a machine is the only thing that can save us from officer incompetence. But we’ll still get hosed with the taxes to pay for their ever growing pensions just you wait.