Back in 2017 the city of Fullerton kicked Air Combat USA out of the airport and after a legally questionable bid process the city leased the hanger to a company called Hanger 21. We covered this briefly HERE and HERE.

Here’s some of the backstory from the City Manager himself: 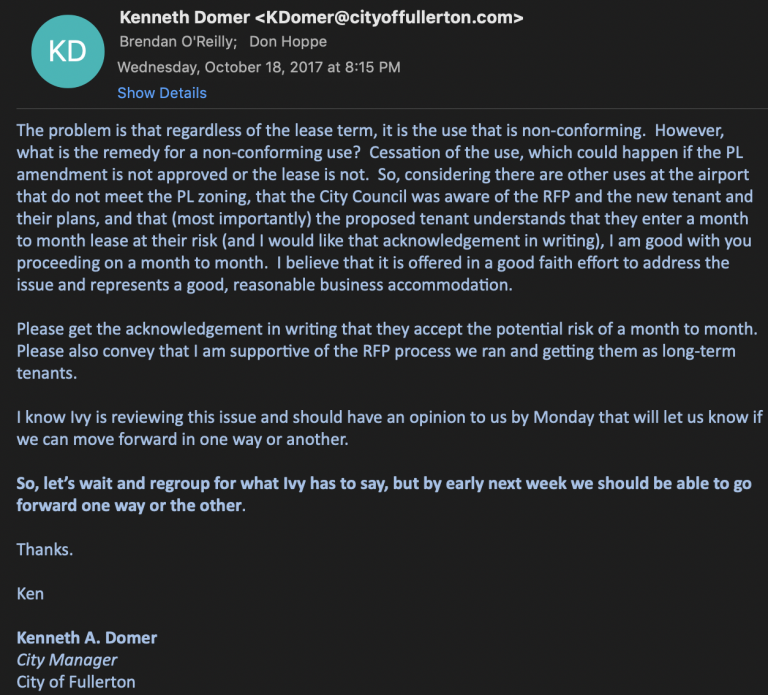 “The problem is that regardless of the lease term, it is the use that is non-conforming.  However, what is the remedy for a non-conforming use?  Cessation of the use, which could happen if the PL amendment is not approved or the lease is not.”

Realizing that the city had approved a bid for a business that wasn’t legally allowed to operate, the city swung into action to fix the problem. The remedy was for Fullerton’s City Council to chang the municipal code in an effort to make Hanger 21’s then-illegal use conform to local law.

And because this is Fullerton – they failed spectacularly.

“H. Other similar public facilities, commercial amenities, and special events on City-owned property when in conformance with the purpose of this zone and approved by the City Council.”

Read that and then think about the timeline because the city didn’t and hasn’t. I’ll point out the obvious problem:

“and approved by the City Council”.

The City Council cannot legally be said to have approved Hangar 21’s usage since they haven’t visited the issue since the municipal zoning change. This is a cart before the horse problem with the council just assuming that they’ve de facto approved Hangar 21’s lease and use through the zone change but that’s an ex post facto problem and is quite an illegal interpretation.

Score another blunder for Jones and Mayer.

Here we sit a year and four months later and the council has YET to fix this problem.

This is another case of city staff, consultants, attorneys and the city council being incompetent and hoping nobody catches on which of course has led to the city being sued.