Earlier this week, we asked you to consider a version of Fullerton where Doug (Chaffee), (Acting Chief) Dunn & (City Manager) Domer had come to an agreement. That agreement included a plan to protect Pilfering Paulette Marshall Chaffee and to minimize damage to Mayor Doug Chaffee’s campaign for Orange County Supervisor.

Shortly after publishing our hypothetical, the City issued a press release stating that the case had been handed over to the District Attorney.  A couple things are curiously absent from the City’s Press Release.

Is Doug Chaffee under investigation for receiving stolen property?

(a) Every person who buys or receives any property that has been stolen or that has been obtained in any manner constituting theft or extortion, knowing the property to be so stolen or obtained, or who conceals, sells, withholds, or aids in concealing, selling, or withholding any property from the owner, knowing the property to be so stolen or obtained, shall be punished by imprisonment in a county jail for not more than one year, or imprisonment pursuant to subdivision (h) of Section 1170. However, if the value of the property does not exceed nine hundred fifty dollars ($950), the offense shall be a misdemeanor, punishable only by imprisonment in a county jail not exceeding one year, if such person has no prior convictions for an offense specified in clause (iv) of subparagraph (C) of paragraph (2) of subdivision (e) of Section 667 or for an offense requiring registration pursuant to subdivision (c) of Section 290.

We know that a White Jeep was used in one pilfering episode. We know a identical or nearly identical white Jeep was in the Chaffee driveway (where Doug still is registered to vote) the day after the sign theft accusations came to light.

We know that a Silver Lexus was used in another pilfering episode. Here’s a picture of the same Chaffee residence from Google Street View showing both a White Jeep and a Silver Lexus. 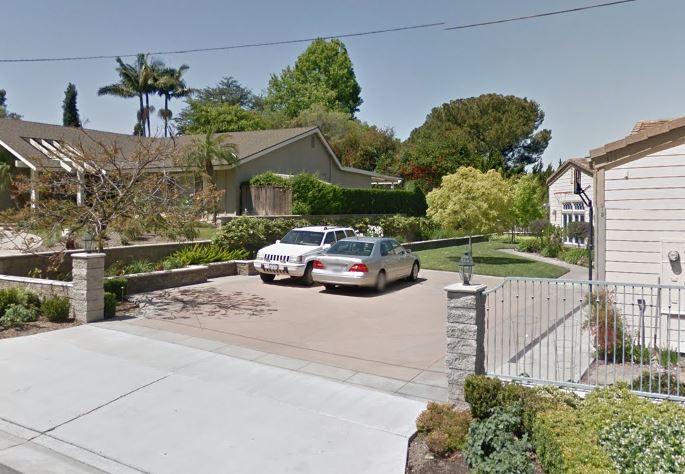 We know Doug may have had access to shockingly similar vehicles used in the sign theft. We know those vehicles have been at the Chaffee residence in the recent past.  This may mean Doug had the opportunity and means to access property that may have been stolen.

We know Doug may have had motive to assist in removing signs from his property. At a minimum, evidence of Pilfering Paulette’s activities found on the Chaffee estate would sink his campaign. In a more extreme case, Doug may have actively assisted in removing the subject signs for the same reason, they embarrassed his campaign for Supervisor.

In fact, according to Paulette’s campaign statements about residency in the 5th District of Fullerton it begs the question of who orchestrated the sign thefts being that the vehicles in question, to this day, have reportedly been seen at Doug’s, and not Paulette’s, residence.

Opportunity, means, and motive.  Basic elements of a crime satisfied?

Here are the jury instructions for PC 496.

To prove that the defendant is guilty of this crime, the People must prove that:
1. The defendant (bought/received/sold/aided in selling/concealed or withheld from its owner/aided in concealing or withholding from its owner) property that had been (stolen/obtained by extortion);
Did Doug Chaffee purposely not return signs to their rightful owner?

[AND]
2. When the defendant (bought/received/sold/aided in selling/concealed or withheld/aided in concealing or withholding) the property, (he/she) knew that the property had been (stolen/obtained by extortion)
Did Doug Chaffee know or should have known the signs were stolen?
[AND
3. The defendant actually knew of the presence of the property.] [Property is stolen if it was obtained by any type of theft, or by burglary or robbery. [Theft includes obtaining property by larceny, embezzlement, false pretense, or trick.]]
[To receive property means to take possession and control of it. Mere presence near or access to the property is not enough.] [Two or more people can possess the property at the same time.] [A person does not have to actually hold or touch something to possess it. It is enough if the person has [control over it] [or] [the right to control it], either personally or through another person.]
This one is a big one.

Did Doug Chaffee own any of the property used to conceal stolen property? This would necessarily include any vehicles he owns and any home he owns.

Did he know stolen signs were on or in his property at any time?

These are questions that need answers. It seems at least plausible, based on what we actually do know, that Doug might be under an active criminal investigation concerning his involvement in his wife’s activities.

Yet, over a week after his wife’s activities were exposed and he was de facto implicated, we have absolutely no comment from Doug Chaffee.  This is wrong.

The Residents of Orange County’s 4th Supervisory District deserve to know what’s happening with their vote.

We call on the Orange County District Attorney, the City of Fullerton, Doug Chaffee, Paulette Marshall Chaffee, and the Democratic Party of Orange County (DPOC) to immediately disclose what Doug Chaffee knew, when he knew it, and if he is in fact under criminal investigation.

21 Replies to “Is Doug Chaffee Under Investigation?”