Skip to content
Posted onAugust 5, 2011August 20, 2011About Us
by English Major67 Comments on Joe Felz In Wonderland?

A quick trip to Fullerton Stories reveals a statement by Fullerton City Manager Joe Felz that claims the City never made any “settlement offer” to the family of killer cops victim Kelly Thomas, who was brutally bludgeoned to death by six members of Felz’s police department on July 5th.

This is just about the shabbiest deception the City has tried yet; verbal hairsplitting to try to dodge the fact that your scumbag lawyer Bruce Praet presented “unofficial” proposals (oh, no not a “settlement,” that can only be authorized by the Council) to the family of the victim. Well, goddam, that’s a distinction without a difference! Felz, shame on you for running this turd up the flagpole, and shame on some stooge named Davis Barber at Fullerton Stories for accepting and propagating this ludicrous trash as pertinent to anything. Maybe now Felz thinks no one will we be inclined to ask who was responsible for authorizing Praet to contact the family in the first place. Was it you, Joe? Or did you even know about it?

Probably the worst part is the not-so-subtle insinuation that Ron Thomas, Kelly’s dad has been intentionally misleading the public.

Up until now I was willing to give Felz the benefit of the doubt – that he was just some poor former museum director dufus in waaaaaay over his head. Now it would appear that he was either completely out of the loop (bad) or, complicit in a nasty plot to discredit the Thomas family (worse) and protect the assess of some crooked cops.

After reading the Desert Rat’s pithy and mordant post about the likelihood of having three antiquated and liberal repuglican geezers on the Fullerton City Council, I felt compelled to respond with my own message – a message of hope and good will to those who can only contemplate Ed Royce’s RINO triad with a sense of gorge-rising horror.

No, I will not dwell upon the morbid actuarial statistics for the American male. Rather I invite the Friends to contemplate, along with me, the New Reality. My grandfather Frank always admonished us to seek out the proverbial silver lining in bad news; and so we shall. The Economic Recession that has hit so many in the private sector, and that so far has barely affected the public sector at all, will, in 2011, deliver its overdue bill to government employees.

Can Obama keep cranking out money fast enough to preserve all the government jobs it has protected so far through the comically named American Recovery and Reinvestment Act? The answer to that is likely no. Not after the November election. And even if he could, California had received barely 10 billion through the end of the last fiscal year – not nearly enough to grease all the bureaucratic skids in our dysfunctional state at the various levels. The presses just can’t print that fast.

The chances of raising local taxes, like Don Bankhead did (and McKinley and Jones would have likely joined him) in 1993 seems dim. Nobody’s going to stand for it. Not even the ignoramuses who voted them in.

And this leaves us with the spectacle of the public employees fighting among themselves for their share of the diminishing fiscal pie. And to that I say: Amen! Competition is good. It causes us constantly to assess our priorities. It’s true that the cops and emergency service providers will have the advantage, standing, as they already do, at the head of the line. But will the public stand for library or park closures in order to fund these people? The RINO mantra of “public safety” can only take its chanters so far. Sooner or later reality demands a check.

And hovering in the back of the room, like the chorus in a Greek tragedy is the specter of municipal bankruptcy, Vallejo-style – the game changing possibility that all public administrators and employees should want to avoid like a plague. But the public may have reason to be more ambivalent about that prospect.

END_OF_DOCUMENT_TOKEN_TO_BE_REPLACED
Posted onJune 11, 2010Dead heads
by English Major3 Comments on Is The Show Over Yet?

The other day we shared this image of Harry Sidhu supporter and Orange County Business Council boss Lucy Dunn leading a gaggle of ‘pug “insiders” in a sing along.

In the final act of the eponymous opera, Tosca throws herself off the prison wall. Is Lucy getting ready for the final aria and the big jump?

Now that Shawn Nelson is moving up to the Supervisor’s office, his imminent departure creates an even more unpredictable Fullerton City Council campaign landscape.

Pam Keller has already announced that she’s out. With Nelson gone that means there will be two openings, plus the interminable candidacy of the antediluvian Don Bankhead.

It’s hard to believe that the four remaining councilmembers could decide on a replacement for Nelson, so the prospect of a rump council (okay that’s pretty funny if you think about it) and a November election to fill the remainder of Nelson’s term seems inevitable.

Then, of course, there’s the sad deterioration of Doc Jones, whose antics and idiocies continue to mount. Re-elected in 2008, there has been speculation that he would hold on for two years and then quit when a suitable Ackerman/Royce Chamber of Commerce zombie could be coughed up.

Could there be yet another seat up for grabs, come November?

It’s already getting late in the year so the interested and the ambitious must surely be contemplating their political futures today.

Good luck to them, with a caveat. The ones whose ambitions outweigh their brains will be scrutinized closely. By us.

Tomorrow you will know if your electoral politics will be bought and sold like a cut up salmon at a fish market.

In the 4th District Supervisor race in the past several months we’ve seen it all: two candidates – Galloway and Sidhu who both conjured up several addresses in order to favor us with their candidacy. One, the arrested adolescent Galloway, wanted so much to be the union stooge; yet it was the ignorant, incomprehensible, buffoonish Sidhu who grabbed the union brass ring.

Lorri Galloway seems to think she has Jesus Christ on her side. Well, okay; but Sidhu’s union pals spent almost $1.5 million to beat a solid candidate, Shawn Nelson, who actually lives in our district. Galloway has not yet submitted campaign contributions from the Almighty.

What will happen? I really believe that the voters will see through the phony crap laddled out by Hide and Seek Sidhu and his self-seeking tools, some of whom have trolled this blog. And there is no chance anybody who has seen the Precious Princess in action can come away from the experience with any other emotion than revulsion. Come to think of it, anybody who has seen the videos of Harry Sidhu will be able to do anything except repress a contemptuous chortle.

Frankly, the very idea that either of the two candidates, Galloway and Sidhu, who both commenced their candidacies with blatant lies, could be received with anything other that disdain by the electorate. These two miscreants have set the political bar very low indeed.

I am voting for Shawn Nelson. 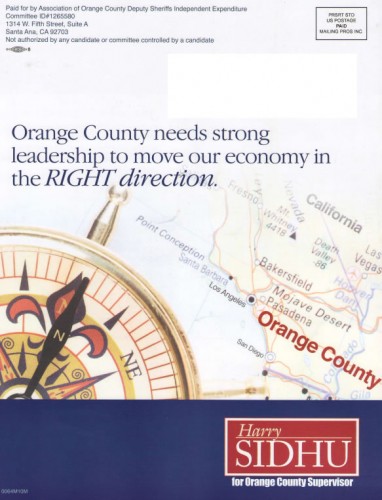 One of our Friends got this dopey generic flier put out by the Sheriff Deputies’ union promoting the carpetbagging campaign of Hide and Seek Harry Sidhu. Talk of navigation with map and compass makes you think Sidhu’s running for Boat Owner Association President.

They made two errors, apart from the lame nautical metaphor.

The map and compass serve to remind us that Sidhu needs a map and a compass to get around the district he doesn’t live in – our 4th District.

The use of the compass is doubly ironic since Sidhu, who perjured himself on voter registration forms to support his carpetbagging, and who happily sought union IE support (though not their money!), seems to have no moral compass at all.

And somebody forgot to tell the union that they are supposed to play up “Harry” and not “Sidhu.”

END_OF_DOCUMENT_TOKEN_TO_BE_REPLACED
Posted onApril 30, 2010About Us
by English Major5 Comments on “OC Watchdog” Gets Award; Pats Self On head

Hooray! The OC Watchdog of the Orange County Register has been given some sort of “public service” award by some newspaper publishing organization or other. Teri Sforza is crowing about it, here, and sharing some of the important watchdoggin’ they’ve been doing. Well, okay, they’re all in a precarious employment situation over there so a little self-promotion can be forgiven.

On the other hand, when we consider the stories that the Watchdogs have serially ignored, we have to wonder with the Roman poet Juvenal, quis custodiet ipsos custodes? or in English: who guards the guardians?

Here’s a partial list of stories missed, dismissed, or glossed over by the OC Watchdog:

Pringle paid $250,000 to lobby for OC Children and Families Commission; Pacific Strategies awarded contracts of half a million dollars in three years to run a blog and write PR pieces for politicians; Commission gives “The White House Writers Group” $150,000 to proclaim the good works of the Commission on a bigger stage.

The main problem seems to be lack of curiosity and/or tenacity. Then there’s the rather disturbing possibility that some folks in authority just gets less scrutinized than others.