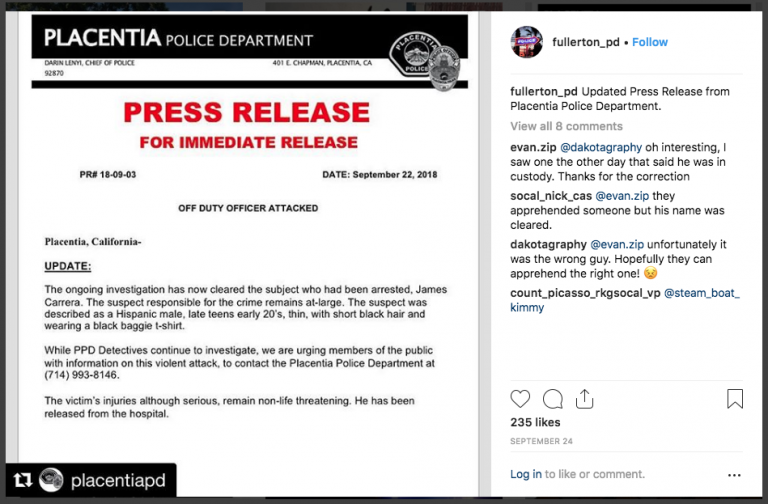 Officer Roesler has been an FPD officer for a less than a year.  He was previously a cadet. 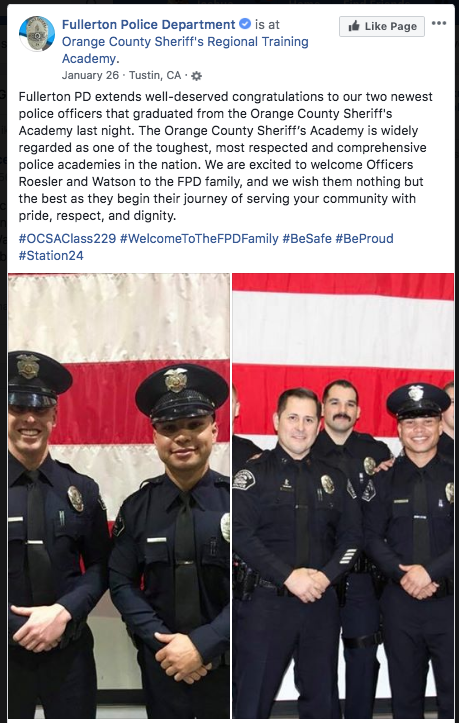 We have been able to verify that officer Roesler’s official PD email account has been disabled.

After another public records request was put in, three officers were said to be on leave as of 26 November 2018.

We believe the first one listed is Captain Tom Oliveras of Lady Antebellum fame, the second or third being Roesler. We’re still trying to figure out the third stooge and what prompted that bit of discipline. Word also has it that Katie Hamel, wife of Irvine Police Chief Mike Hamel, has been put on leave but we’re trying to very that information and she would make, at least, #4 currently on leave.

This is the face of modern law enforcement and the Orwellian “some animals are more equal than others” world we live in where an officer can falsify a report, a man can be arrested based on that false information and instead of openness and transparency the entire government locks down to protect themselves and their own. We’ve had to know where to look and put in numerous records requests in order to get this much information out to the public and we still only have a part of the story. This obfuscation of the truth is all by design and a result of the heroes’ unions and politicians that enable such lying, such coverups and such violations of the public trust. We’ll keep you posted as we learn more about these cases.

UPDATE 4pm: The following just came back from another Public Records Request:

Being that a report was taken, and we now believe it to have been a false report, we will wait to see if the DA or Placentia PD chooses to prosecute.

UPDATE 4:15pm: After a quick phone call, the office of the Orange County District Attorney has just confirmed to me that Placentia sent the DA the case, with defendant Nathan Roesler, to them on 28 November 2018 and it is in review and proceeding normally.

21 Replies to “Another Possible Cover-up by FPD”