Your guess is as good as mine.

The charges leveled by the OC DA Tony Rackauckas against Roland Chi were as long as your arm, and stemmed from the tsunami of flagrant and persistent health code violations at a Garden Grove market. The case appears to have finally culminated in a plea agreement reached last April.

An alert Friend calling him/herself Vic Tayback noticed that our hapless DA, just a few short months later, has lent his name to the Chi Fullerton Council campaign as an endorser! Wow, that’s setting the bar pretty low, even for Rackauckas, and of course not only makes you wonder what T-Rack’s endorsement is worth, but also to contemplate the composition of the man’s moral fiber – if any exists.

Rack has been criticized in the past for his inability or unwillingness to pursue political corruption in OC – like Harry  Siduh’s blatant perjury. Now it appears he is willing to endorse just about any kind of misfeasance. 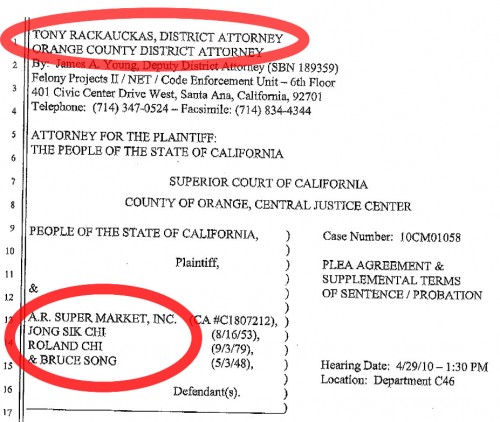 20 thoughts on “So Why Did Rackauckas Endorse Roland Chi After Criminally Charging Him?”