UPDATE: Gustavo Arellano has weighed in over at the OC Weekly.

Hewitt is Cunningham’s blog mentor who encouraged him to start what is today called “Red County”.

As noted above Hewitt is also a commissioner on the CFCOC, and thus Cunningham’s boss. 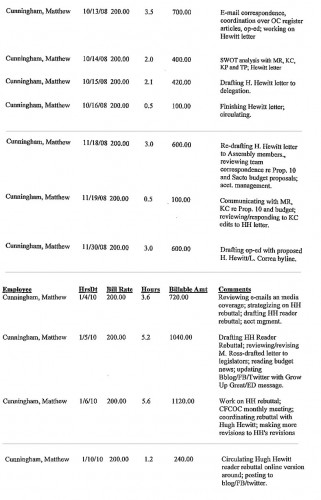 It’s odd that the presumably literate Hewitt can’t write his own letters and “op-ed” pieces if he believes so strongly in the Commission. He needs his buddy Cunningham to do it at a cool $200 an hour; and he’ll do it too, dammit, no matter how many hours it takes.

Of course it’s also odd that Hewitt is on this ridiculous commission in the first place, unless one recognizes it as a platform to dispense patronage to old pals.