Was a ghost written “op-ed” worth the $3,200 that Cunningham charged the OC Children and Family Commission? You be the judge. Here is the article that found it’s way into some obscure journal. Notice how the supposed writer, Shawn Steel,  starts off by announcing his opposition to prop 10. Sound familiar? Then begins the fight to save Rob Reiner’s legacy.

But really. How could this have taken the better part of 20 hours to produce? That’s two and a half freakin’ days! The Declaration of Independence was written faster.

The irony of the “we know the value of a buck” schtick written by somebody billing the taxpayers $200 an hour to hand out toothbrushes is profound.

And why can’t Shawn Steel write his own op-eds if he actually cares about this issue instead of wasting the CFCOC money? Of course he may not be very bright. For some reason he is a supporter of Hide and Seek Sidhu.

Anyway, here’s the Pacific Strategies billing that reflects the effort on that masterpiece. So what does that work out to, ten bucks a word? 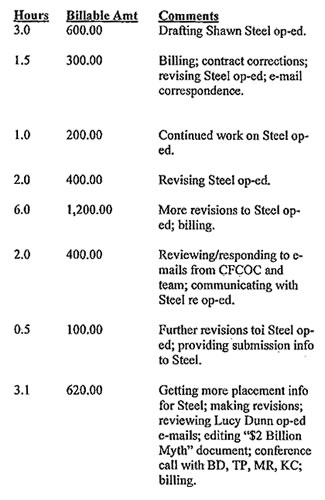