Skip to content
Posted onMarch 9, 2017March 9, 2017Fullerton School Board
by The Worm17 Comments on The Nicholas Jr. High Sex Abuser: What Went Wrong?

Over at the OC Weekly, Gustavo Arellano got his hands on the deposition tapes for the civil trial of Melissa Nicole Lindgren. She was the young Nicholas Jr. High teacher who is doing 4 years in state prison for lewd acts against three Fullerton students.

Despite numerous warning signs, the abuse occurred under the school administrators noses for several years before she was finally arrested in 2014.

Mr. Arellano’s article goes into great detail, but here is the most important question:

Who is responsible for leaving this predator in the classroom after numerous warning signs?

Let’s take a look at the suspects:

The Fullerton Police Department: Received an anonymous letter alleging inappropriate activity with students. Detectives claim they investigated the issues, but they ultimately cleared the teacher.  According to one inside source, the FPD’s failed investigation actually hampered the school district’s ability to take action.

Matthew Barnett, Nicholas principal: Noted many warning signs, but ultimately “couldn’t put his finger” on Lindgren’s indiscretions until she was arrested. He also forgot to interview Lindgren about the accusations in the anonymous letter. Barnett has since been promoted to “Director of Educational Services” at the Fullerton School District.

The Fullerton School Board: Fairly useless in disciplinary matters. Most of the school board is content to take cover behind state laws that prevent them from resolving personnel issues. The one action the board did take responsibility for: paying a $3.25 million settlement to Lindgren’s victims.

The teachers’ union: School administrators will tell you that their investigatory and disciplinary powers are extremely limited by special state laws that protect deviant teachers like Lindgren. These laws are put into place by elected officials at the behest of the powerful California Teachers Association. These protections clearly hindered the district’s ability to investigate and terminate a child predator in their midst.

So back to the question. Who is responsible for allowing this teacher to run wild?

Take your pick. But wherever blame is cast, there is one certainty that nobody will admit: The Fullerton School District can’t offer any assurance of your child’s safety. And everyone involved seems to be OK with that.

Yesterday one of our blog readers expressed disbelief that any Fullerton teacher made over 80 grand a year. That’s a lot of money for a part time job, and our poor school teachers are supposed to be underpaid, right?

But the real kicker is that these folks only had to work for 182 days a year to earn these salaries, while the rest of us slog it out for about 240 days.

So it seems that plenty of Fullerton teachers are doing just fine after all. Maybe it’s time for the school board to stop accepting furlough days as the solution to our budget problems. It’s supposed to be about the children, right?

END_OF_DOCUMENT_TOKEN_TO_BE_REPLACED
Posted onDecember 8, 2010December 8, 2010Fullerton School Board
by Travis Kiger11 Comments on Who’s Got the Huevos?

Maybe our La Habran neighbors to the north do. Their school board is now facing a strike by the La Habra Teachers’ Association, a body of both the CTA and the NEA unions. The issue? Their school board has given them a minuscule 2% pay cut and then refuses to call it “temporary.”

Negotiations had failed after several months and so the board was forced to impose increases in health care contributions as well as a reduction of 2 instructional days in order to deal with a 22% budget shortfall.

Amazing. A 22% budget hole and the teachers only had to take a 2% pay cut, and yet the union still plays the strike card.

Back in Fullerton, Superintendent Mitch Hovey has already articulated grave concern about pending negotiations, and Fullerton is in essentially the same financial straights as La Habra. It will be very interesting to see how our illustrious teachers’ union and our new school board deal with these issues.

Over the weekend these little signs began appearing on a few intersections in Fullerton. 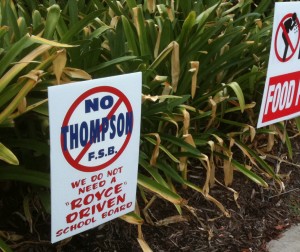 The print is so small that you’ll have to pull over and get out of your car to read it. This one warns of Chris Thompson’s endorsement by U.S. Congressman Ed Royce, which is pretty funny considering it’s the same message that Thompson is trying to get out himself. I’m sure he appreciates the help, but next time please make them big enough to actually read.

Other equally odd versions of the sign say “bad for our children, bad for our teachers” and “Bushala puppet.” Thompson is an advocate for promoting good teachers and identifying underperforming ones, which I guess would make him “bad for BAD teachers,” but arguably good for children.

So if Thompson is good for good teachers and bad for bad teachers, who do you think would put up this sign?

The LA Times has published it’s entire database of what it calls “Value Added” teacher ratings, scoring LAUSD teachers with a method that tracks individual students’ advancement as they pass through classrooms over the years.

In support of this idea, State Assemblyman Chris Norby just sent the following letter to current school board members and to this year’s candidates. In the letter, Norby asks them to figure out how to publish similar rankings for Fullerton teachers and schools. 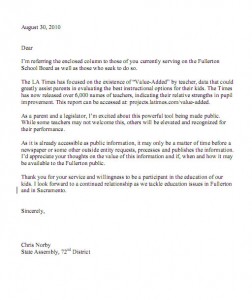 The LA Times’ controversial scoring method is supposed to reflect a teacher’s effectiveness at raising standardized test scores using seven years of student testing data. While the Times admits that the scores do not rate every aspect of a teacher’s effectiveness, they do “bear on the performance of public employees who provide and important service.”

In defense against the teachers’ union outcry over the release of this data, the Times asserts that parents and the rest of the public have a right to view all of this data for the benefit of children.

We’re anxious to find out how the candidates respond to Norby’s request. This information would be extremely beneficial for Fullerton parents.

All eyes were on the Capistrano Unified School District this week as the CUEA (teachers’ union) deployed armies of its members to protest a 10% pay cut. The union rented school buses to bring in over 1,000 protesters to the board meeting, which was halted at least once due to outbursts from the pro-union crowd.

But protests were escalated to new levels of intimidation as union members went so far as to march around the private home of trustee member Mike Winsten and his four children on Monday.

A few days ago we announced that a similar pay cut proposal will be coming to Fullerton Unified School District.

Is this how the union will react in Fullerton? Busloads of unionized teachers sent to create an appearance of public support? FETA union demonstrators surrounding the homes of board members? Will children be used as metaphorical human shields to squeeze more money from taxpayers?

And most importantly, will the board have the guts to stand behind the cuts?

END_OF_DOCUMENT_TOKEN_TO_BE_REPLACED
Posted onDecember 16, 2009January 5, 2010Fullerton School Board
by Travis Kiger25 Comments on FSD Teachers: Get Ready for a 1025 Pay Cut

Fullerton teachers, it’s time to be frank with you because the school board and your union will not.

There will be no new parcel tax to save the FSD budget. Due to unsustainable concessions to the teachers union in previous years, the Fullerton School District will have to cut teacher pay next year. The budget hole is enormous and there are no foreseeable alternatives.

Yes, the educrats and union leadership are starting to fill your head with allusions of a new tax on Fullerton residents that will save the day. But the idea that 2/3rds of Fullerton voters would agree to a big tax increase in the middle of a deep recession is absolutely laughable.

FFFF’s appointed delegate to the FSD Budget Scapegoat Committee has provided us with this matrix of salary reductions to close the budget gap that could be as large as $11 million next year. The proposed salary cuts were put together by district administration.

Nobody likes to see their neighbor take a pay cut, but there are probably other ways for the union to deal with this. For instance, teachers might be able to make larger concessions to their lavish retirement scheme or the high-class benefits package in order to preserve salary.

Either way, the school board is going to find their hands tied and the choice will be in the hands of the union – Take the cut or strike. Is it really all about the children? We’ll see…