During the Marilyn Davenport protest a CBS news crew walked up the block to Dick Jones’s house to see if they could get a comment from the comical mayor of Fullerton regarding this controversial event.

Too bad Dick was hiding from the nice news lady and her cameraman.

If our mayor had the guts to address these protesters, what would he have said? Who knows? Normally nobody can get this guy to shut up. On this day he was MIA. 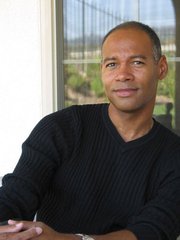 Could this be our man?

Over at the Red County blog some dude named Walter Myers has been downplaying the egregious e-mail by Fullerton’s Marilyn Davenport that has made so much news recently. Today he did a post outlining the party’s real problem; and it’s not racism, really, but poor educational outreach to Latinos (he calls them Hispanics) and Asians. Apart from some completely specious demographic reasoning, he indicates that the problem is evinced by the fact that no Latinos or Asians stood up to defend Mrs. Davenport. Huh?!

This guy also has gone out of his way to defend the watermelon patch on the White House lawn e-mail that got Los Alamitos Mayor Dean Grose into so much hot water a couple of years ago. Surprisingly, no Latinos or Asians stood up to defend that cretin.

And here’s some fun commentary at the end of today’s post , starting with an intro by Fullerton religious zealot and anti-Islamic crusader, Zonya Townsend:

Marilyn Davenport and the OC GOP

I can’t write too much right now because I must to get ready to leave for work but must say this much. Marilyn Davenport is the woman that reached out and encouraged me, Zonya Townsend to run for OC CC several years ago. Her activism and concern for our nation fueled my interest in leadership positions in various organizations, including but not limited to the California Republican Party and the Women’s Federated. This whole email situation is a tragedy and misunderstanding that did not need to happen.

Submitted by waltermy on Mon, 2011-05-02 14:22.
Thanks for sharing that, Zonya, which is excellent information and insight for those who don’t know Marilyn. I wasn’t aware of that myself. This is a very unfortunate situation, and as I have always maintained, we need to provide grace towards Marilyn, who made a mistake that she apologized for, and determine how to best move forward as a party. The question now that this has gotten out is how we will respond as a party because we know what the perception of the party is now. We clearly have some work to do. My hope is that this entire situation motivates the party leadership to take our brand seriously and does the outreach that we so need to do in order to grow the party and truly be the party of Lincoln and Douglass.

Walter’s wrong about the shape-shifting “apology,” but he is right that the GOP needs to be motivated and has work to do. But get this: he thinks the GOP is the party of Lincoln and Douglass. Forget the fact that Lincoln stood for almost NOTHING allegedly promoted by the modern GOP (except for neocon war and big government), Stephen Douglass was a freakin’ Democrat!

* As a reader points out, the Douglass referred to might have been the abolitionist Frederick Douglass! If so, my apologies to Mr. Myers for insulting his knowledge of American history, although I’m pretty sure FD would not recognize today’s GOP as “his” party.

Project Islamic H.O.P.E and the NAACP paid a visit to Fullerton today to protest at the home of Marilyn Davenport, the OC GOP Central Committee member who has drawn fire from just about everyone everywhere for sending out an email depicting Barack Obama as a chimpanzee.

An outcry against racism? Sure. Calls for Davenport’s resignation? OK. But these protesters seem to have something else in mind:

Does the office of the presidency demand unconditional love and respect? Should Americans not be “allowed” to insult the President?