A couple of weeks ago Jeremy Popoff’s Slidebar employees and clientele provided more examples of the sort of high class behavior favored by our city council and particularly our lobbyist/councilcreature Jennifer Fitzgerald who has been running cover for Popoff for years and years. You may recall that Slidebar has never gotten the required CUP even as city officials like Fitzgerald, Bruce Whitaker and Party Planner Ted White have schmoozed and petted its miscreant owner.

Everybody seems to be ignoring Slidebar’s violation of planning and nuisance laws until the laws can be watered down so much even a professional douchebag can slime by without comment.

At the outset you can see a bouncer on theft serially pound some hapless dude already on the ground and then go for a head stomp for good measure.

In the open-air saloon known as Downtown Fullerton it’s often virtually impossible to distinguish between the bad behavior of the bar-hopping patrons and the low-lifes hired to control them.

While it shouldn’t come as a surprise to anybody paying attention that the government, at all levels, only works for those who are well connected and make the correct donations. Usually proving this truism is often difficult but we came across an example here in Fullerton that seemed noteworthy.

It appears that Mayor Pro-Tem, and Curt Pringle & Associates VP, Jennifer Fitzgerald decided to weaponize our city government to go after the business “D/Vine” for “word on the street” indicating that they had a promoter in violation of the municipal code. 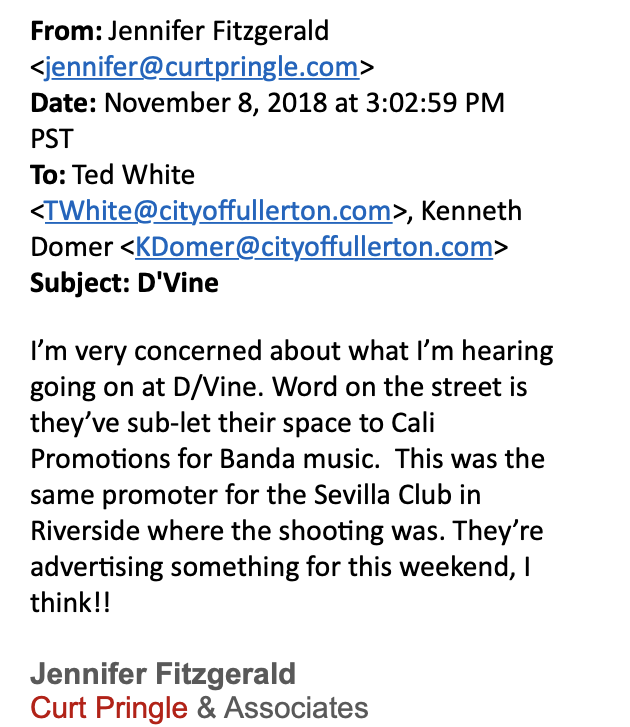 That seems innocuous and even reasonable from a law and order and agency perspective. After all, what’s the problem with a council member & Mayor Pro-Tem being worried about a business running afoul of local law?

Nothing if the local laws were applied equally and in a just manner. But we know that to not be the case.

While Fitzgerald is super worried about public safety over who promotes what music at D’Vine she gleefully ignores other violators of our municipal code when it benefits her. As an example of such would be when she holds events and parties at The Slidebar. The Slidebar which for years has violated local amplified sound ordinances while operating without so much as a Condition Use Permit or even an Administrative Restaurant Use Permit (ARUP).

For those new to these issues – in this city you cannot operate a restaurant without an ARUP and you can’t sell alcohol and have live entertainment with a CUP and a Live Entertainment Permit. The following screenshot is from the City Staff’s own presentation to City Council on April 16th, 2019: 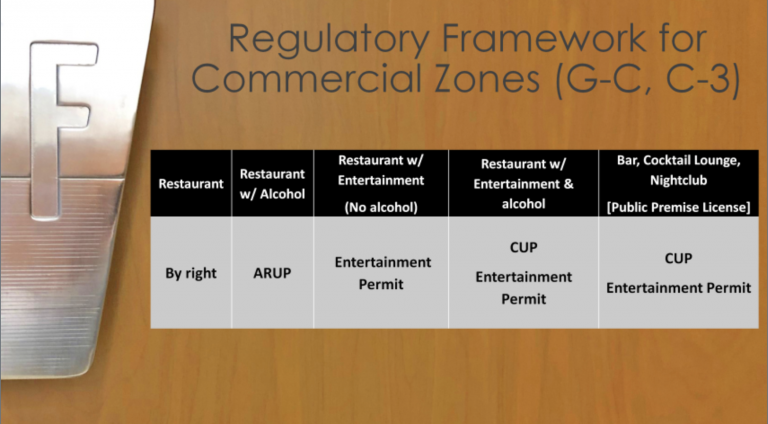 The Slidebar only has the Live Entertainment Permit despite not legally qualified to have one thanks to their just ignoring the law regarding the ARUP/CUP. Nearly every other business is required to have these permits and for 7 years Fitzgerald has said bupkss about it.

Fitzgerald, like so many others on the dais before and still, has no problem holding fundraisers and heaping praise on some businesses in clear violation of the most basic of rules required to run a bar in downtown but when the wrong promoter plans the wrong type of music – now there’s a need for a call to action. Rally the troops! Tally-Ho! The scourge of banda music must be stopped… because Banda music is… bad?

Let’s look at that. Banda music is what exactly? From Wikipedia:

“Banda is a term to designate a style of Mexican music and the musical ensemble in which wind instruments, mostly of brass and percussion, are performed.”

This is something Fullertonians have complained about before it seems but I didn’t realize it was such a problem. I sort of expect to hear this music at places like Revolucion Cantina and in fact they have a “Banda Wednesday”. This negates the idea that the music itself is a problem.

The shooting is a cause for concern if you’re worried about what CAUSED the shooting… but if it isn’t the music causing people to be shot (because the shooting happened during a “Purge” themed Halloween party playing Hip-Hop) then Fitzgerald must blame the promoter?

Can a promoter rationally be blamed for the wrong people showing up to a show? Fullerton doens’t seem to blame the local bars for bringing in undesirables who urinate, vomit, fight and graffiti all over downtown. Hell, Fitzgerald herself recently blamed “Pre-Gaming” in the parking lots for much of the mayhem and DUIs around town.

Thus using Fitzgerald’s own local logic let us dispense with the idea that the promoter caused the shooting in Riverside. After all, it might have been “pre-gaming” in a parking structure that led to the shooting. To do otherwise would be an especially comical problem when we have a fire & life safety issue in downtown related to a business owner whose family is alleged to have burned one of their own previous businesses to the ground.

It’s sickening that the city can look into D’Vine for their banda/promoter problem while simultaneously Community Development Director Ted White was exchanging text messages with Joe Florentine and emails with Jeremy Popoff, local bar owners, in the build up to municipal code changes of how Florentine’s & Popoff’s businesses, and all bars, would be regulated despite their own flaunting of the laws. 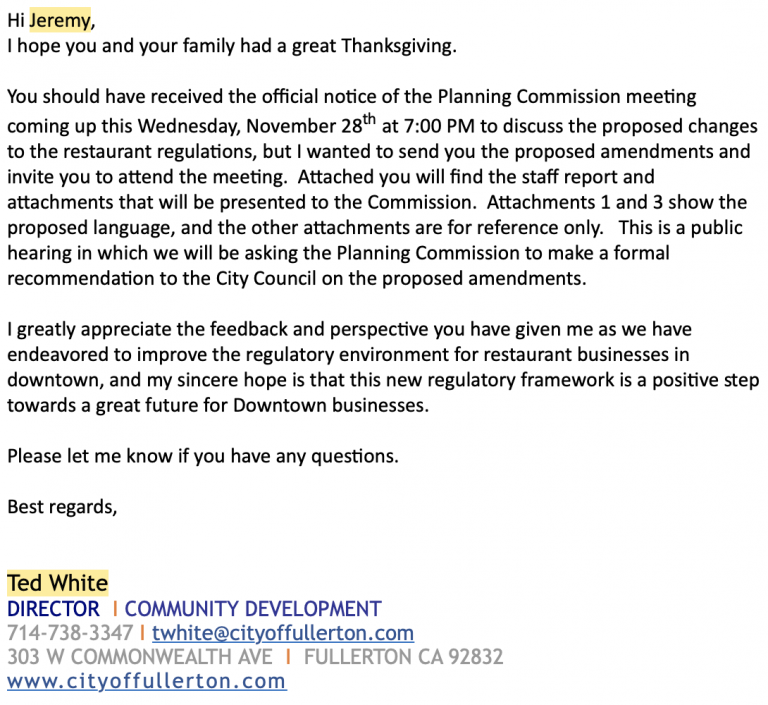 While Ted White was looking into the ARUP/CUP status of D’Vine he was ignoring the very real problems regarding Florentine being, for over a decade, in violation of life safety requirements. To recap – Florentine has refused to follow his own Conditional Use Permit (CUP) requiring fire sprinklers and the city has refused to enforce that CUP up to and including the Chief of Police rubber stamping Florentine’s Live Entertainment Permits year in and year out despite those permits also requiring adherence to the CUP. 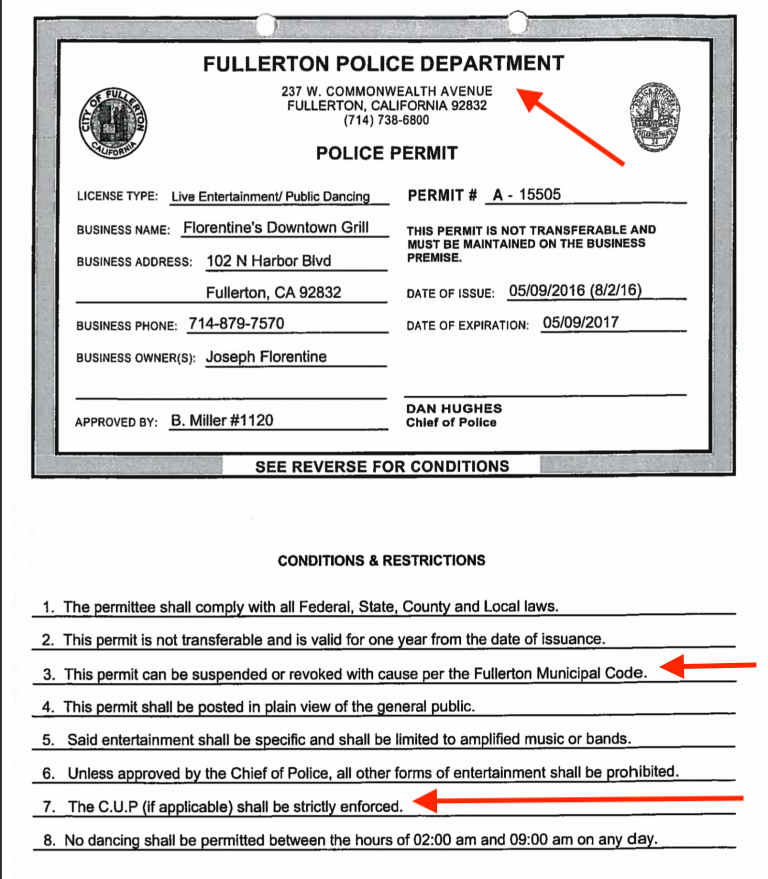 “The C.U.P. (if applicable) shall be strictly enforced.”

It’s nice to have a clear cut example of the city picking and choosing winners and losers. This email from Fitzgerald about D’Vine shows us clearly that our city responds to issues immediately when the council says jump all the while turning a blind eye to worse problems from similar businesses in the same neighborhood. I guess it really does pay to own the right council members.

A bar just came on the market in Orange County, and it looks and smells a lot like Fullerton’s infamous SlideBar. Check it out. 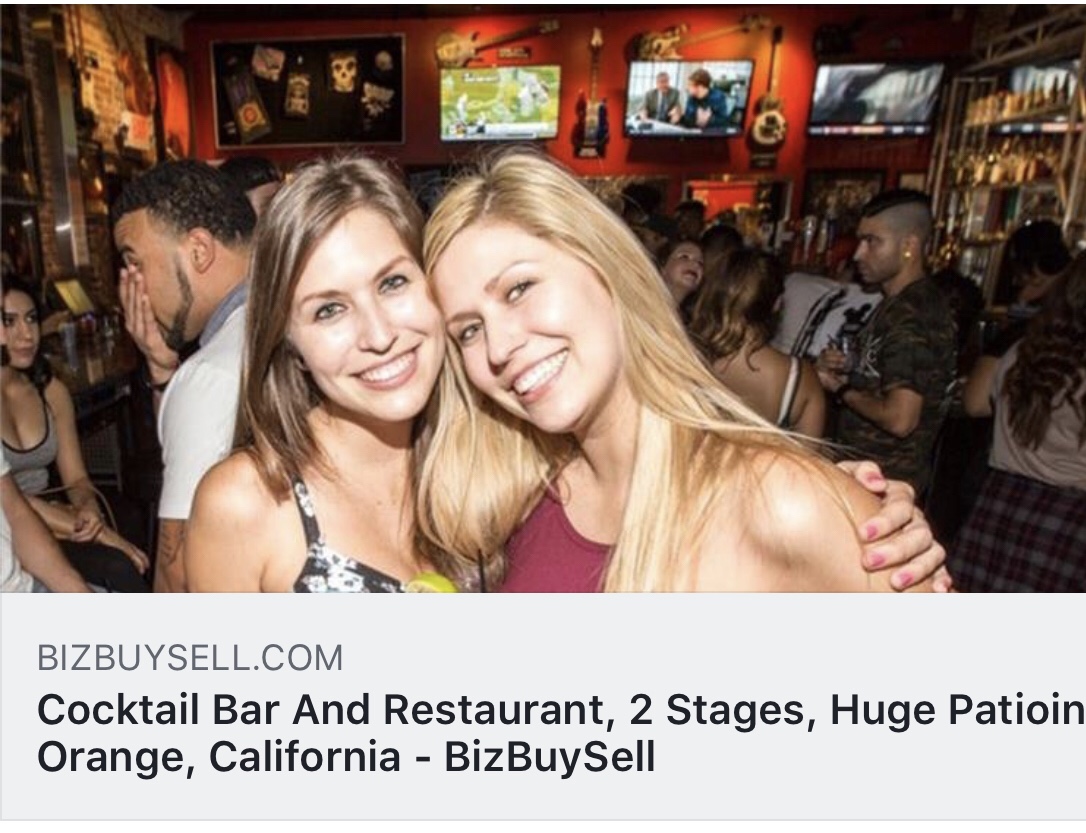 The listing says it’s in Orange, CA, but the description matches Fullerton loudest chugghub to a T. I’m told the photo matches the Slidebar interior, too.

I wonder if the new owner will still be able to blast amplified outdoor music into the surrounding residences without a permit.

END_OF_DOCUMENT_TOKEN_TO_BE_REPLACED
Posted onDecember 12, 2016December 12, 2016Behind Closed Doors
by Mr. Peabody48 Comments on The Culture of Vodka, Vomit & Vehicular Mayhem (Part One); or Who is Gregg Hanour?

It is often said that nature abhors a vacuum. I think government ineptitude and corruption does, too. For a void created in the latter case attracts all sorts of opportunists looking to get ahead. Just consider the Gennaco affair for a moment: an out-of-control police department and a city government that wanted it to stay that way, called on the “professional” services of Michael Gennaco to make sure nothing was done at all.

The other day our crack team of investigators discovered that a fellow named Gregg Hanour had made public records requests for police calls to two of downtown Fullerton’s night clubs – Bourbon Street and our old friends at Slidebar Rock ‘N Roll Something-or-other. Mr. Hanour is a former bar owner who now makes it his business to explore ways in which bars can quit annoying the municipalities in which they are located, abide by the permits that let them operate, and control their rowdy and inebriated customers, etc. Apparently, one of the main strategies offered by Mr. Hanour is to get bartenders to quit serving alcohol to drunks.

Downtown Fullerton must occupy a bunch of Hanour’s business development resources, given the completely out-of-control booze and barf culture that appertains. Good God! Just look at these two rap sheets:

Of course we are all familiar with the Slidebar and its checkered history. What most people in Fullerton don’t realize is that Slidebar is currently operating illegally as a night club. That’s right. This establishment has no conditional use permit, and every time something untoward goes on there a tremor of fear should pass through the City’s Risk Management Department. That’s because the City has intentionally looked the other way while Slidebar and it’s politically connected owner Jeremy Popoff keep the doors open and the drink flowing.

The real possibility of injury or assault or worse is evident in the long list of police calls to this bar. Can the City be held responsible for the consequences of letting this place run without the necessary permits? I don’t know. Shall we ask the City Attorney?