In a previous post I alluded to Jan Flory’s alleged investments in the weed industry. Today I’m confirming it (as others have) and shedding light on a possible reason for her willingness to vote for an ordinance to put weed in neighborhoods despite HER OWN expectations that a buffer be added later.

A buffer that cannot be added until AFTER the ordinance goes into effect.

So not only did Jan Flory open us up to litigation by expecting a future council to take away zoning rights from landowners, playing along with The Other Dick Jones as he gave terrible legal advice which pushes Fullerton closer to being sued (all under the negligent eye of City Manager Ken Domer), but she ALSO voted to possibly enrich herself in the process.

HERE is Jan Flory’s 700 form as she filed it per election law. In it you’ll find this nugget: 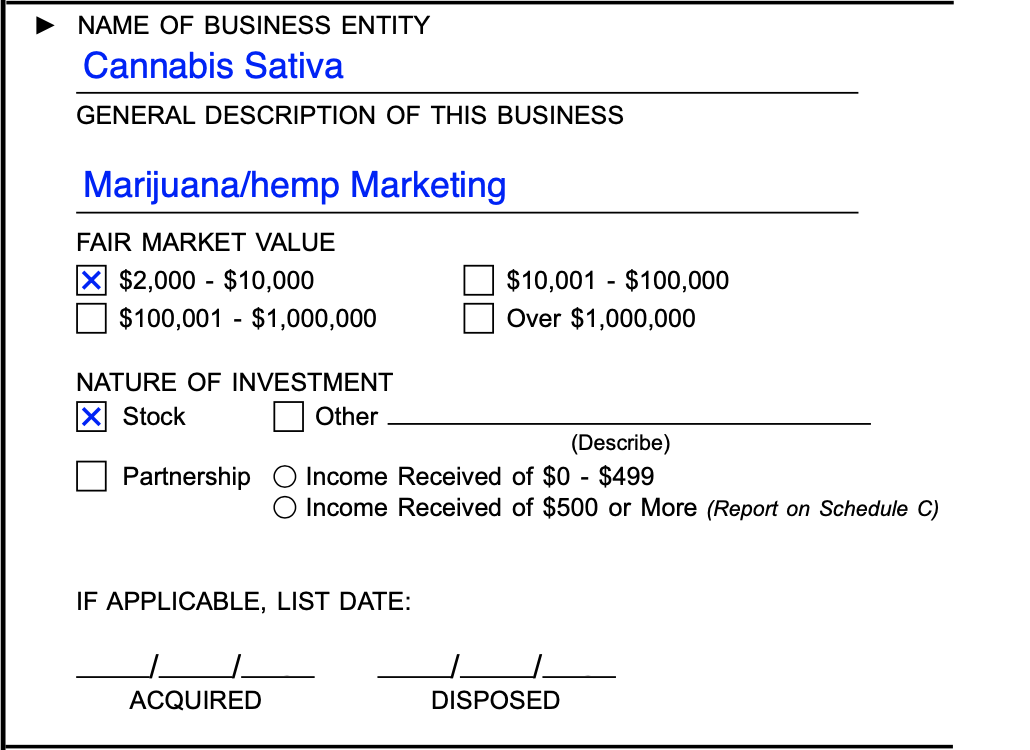 So she owns stock valued somewhere between $2-$10k in a Marijuana/hemp Marketing company. But who is Cannabis Sativa actually?

They largely seem to be a CBD company, however they own several other companies in their “family of brands“. This is from a press release of theirs:

“Cannabis Sativa, Inc. (“CBDS”) is engaged in the licensing of cannabis-related intellectual property, marketing and branding for cannabis-based products and services, operation of cannabis-related technology services, and ancillary business activities. CBDS licenses the “hi” and “White Rabbit” brands, holds a U.S. patent on the Ecuadorian Sativa strain of Cannabis, a U.S. Patent for a marijuana lozenge, and operates subsidiaries including: PrestoDoctor® (https://prestodoctor.com), GK Manufacturing and Packaging, Inc. (http://gkmanufacturinginc.com ), Wild Earth Naturals® (https://wildearthnaturals.com), and iBudtender (https://ibudtender.com). The Company is the official licensee for Virgin Mary Jane Brand (https://virginmaryjanebrand.com). In addition, CBDS seeks strategic partners for acquisition of operating companies, intellectual property and other assets which fit within the CBDS corporate vision.”

The most interesting one there to my eyes was GK Manufacturing for their “white label” services. What that means from a practical standpoint is that they make generic products that people can buy and re-sell under their own labels. If a local dispensary wants to sell a store brand product without having to actually create it, they call up a company like GK Manufacturing who then makes it and brands it for them. You see this all the time in the beauty industry because no, the local instagram influencer didn’t really create her own makeup line. Sorry fellas.

As more dispensaries & marijuana businesses open up, especially closer to home as GK is headquartered in Placentia with a 16,000sqft facility in Anaheim, it makes sense that a company such as Cannabis Sativa, who by their own PR has interest in buying out weed companies, would want an ordinance such as Fullerton’s to pass – the less restrictive the better.

Did this influence Jan Flory’s decision making process? Well logic and the law certainly didn’t by her own admissions and her useless request of the current council to fix her vote so it’s as solid of a reason as I can come up with presently.

A company Jan invests in has the chance to make money, Fullerton’s City Attorney gets to offer bad advice and then get to bill us again to fight the lawsuits he created, the City Manager gets to look the other way all while you get stuck with the legal bills for all of this reckless nonsense – it’s a win-win-win for the ruling government class.