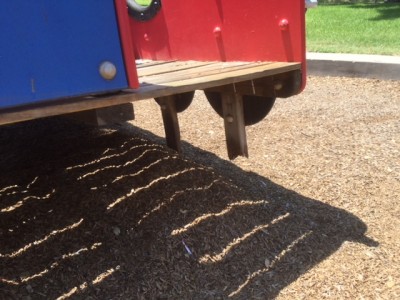 A little over a year ago, we ran an article about the deteriorating condition of Rolling Hills Park (right around the time Parks and Recreation were gearing up for the premier of the so-called “fitness stairs”). We even made a little joke about the condition of a certain fire engine play set:

Flash forward a year and the joke is a lot less funny, because this is what the foundation of this children’s toy looks like now: 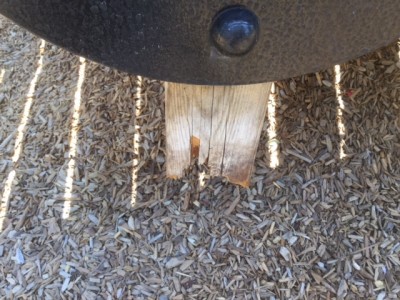 But don’t worry! According to a July 25 email from the City to a concerned resident, this equipment is a “solid piece of play equipment” that “offers “safe play for the time being”

This denial does seem to be a pattern at Parks and Recreation – we also have the fitness stairs disaster (documented by Mr. Peabody here), which they continue to ignore, and the Laguna Lake fiasco, which was ignored until the statute of limitations on the architect ran out. At least in this case, the City allows that its current plan is to remove and replace all the existing play equipment as part of its upcoming renovation. To that end, our sources tell us the City has placed yellow tape around the dangerous equipment, which has proven to be an extremely effect deterrent in the past.

A community meeting concerning renovations to Rolling Hills Park is scheduled for August 15, 2018, at 6:30 pm, at E.V. Free Church, located at 2801 N. Brea Blvd., Commons Building, Room C-212. If you utilize Rolling Hills Park, or you are a taxpayer who would like to prevent another avoidable personal injury lawsuit, you may want to attend and make sure the City follows through on its promises. And if your neighborhood park is in similar levels of disrepair (or worse) remember: the squeaky wheel gets the grease. Complain loudly and often, and be sure to cc someone at FFFF when you do.

8 Replies to “The Wheels are Coming off Rolling Hills Park”