— As I figured the Friends would enjoy this I have cross-posted this piece from my personal site. — 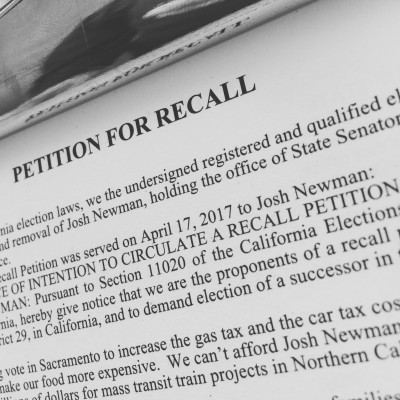 Enough signatures have officially been gathered to recall CA State Senator Josh Newman. Much to the chagrin of the CA (D)s about 1/10th of the 930K residents of Senate District 29 have added their signatures to the effort to remove him from office.

Senator Newman had the following to say about it:

“Thousands of voters have asked to have their names removed from the petition after learning they’d been lied to. The Registrar’s signature count reflects nothing more than a massive flaw in the recall system that has allowed paid, out-of-district special interests to trick voters into signing an intentionally misleading petition.

“Just over half a year ago, the voters of this district chose me to deliver principled leadership and aggressive advocacy for them in Sacramento. This is exactly what I’ve been doing since taking office, and I firmly believe they’ll see the truth beyond this cynical and underhanded recall effort.”

Let us dissect this bit peculiar partisan pity party for the sake of posterity.

A little math is needed to dispel this talking point. 63,593 verified signatures were needed to put a legal and Constitutionally protected recall of Senator Newman in front of the voters.

With 68,484 verified signatures out of 96,516 collected during the signature drive one would have to assume that the “thousands” of signatures to which Newman is alluding totals more than 4,891 and that all of them are verified signatures. With 70% of all signatures being verified one would need 6,987 people to want their names to be scrubbed for the average to work assuming the percentage stays constant.

Considering the win at all costs because the ends justify the means mentality of the CA (D)s in their efforts to save Newman’s seat it isn’t beyond belief that loyal (D)s might have illegally signed the petition incorrectly in the hopes of derailing the count.

However, even if 10,000 people wanted their names removed it would have zero bearing on the results of the recall verification process if their names were counted amongst the insufficient 28,032 signatures.

A massive flaw that wasn’t an issue or a priority to the (D)s in the CA legislature until it looked like it was going to work against their interests. On face value this is a case of (D)s ignoring an issue until it is a problem for them while reaping the benefits when it works in their favor. To read Newman here one must believe that his party is okay with “massive flaws” in our government until those flaws are inconvenient. Out of the thousands of bills introduced into the legislature each year how many times was this “massive flaw” addressed before the Newman recall effort?

The (D)s went so far as to illegally pass legislation (SB96) mid-recall to save Newman from the wrath of the voters. When that failed owing to a stay of SB96 by the Third Circuit Court of Appeals they have now, today, introduced new legislation in the form of SB117, to do it again within the confines of the law.

The (D)s are claiming that the system was fine until it wasn’t and now it has to change now, NOW, NOW! before the flaws they were previously fine with bite them in the posterior. This is what substitutes for leadership in Sacramento.

The (D)s literally fought and won a ruling from the FPPC to allow more “out-of-district” money to flow into Newman’s campaign coffers so he could fight the recall. There is no moral high ground in going lower because you believe your opposition went low. How much of that $1.5Million raised for Senator Newman thus far is from within his district? When asked he’ll dodge and claim to be playing by the other team’s rules to win at all costs.

No, of course not. Newman is essentially arguing here that people are too stupid to read and surely didn’t read what they were signing and therefore the process is flawed and needs to be changed.

If people are too stupid to read then it calls into question the efficiency and value of our public education system as well as our very system of government. Were those voters too stupid to know for whom they were voting in the first place? So it was the will of the intelligent voters to put Newman into office but those same dumb, dumb dummies can’t be trusted to read a petition that might remove him. This is classic eat your cake and then have it too nonsense.

“Just over half a year ago, the voters of this district chose me to deliver principled leadership and aggressive advocacy for them in Sacramento.”

Instead they got a tax-hiking virtue signalling party politician who votes for legislation without a funding source (SB562 – Single Payer), legislation that puts our state at risk of losing needed federal funding (SB54 – Sanctuary State), a massive tax increase to fund things we already paid for without caring about how our previous money was squandered (SB1 – Gas/Car Taxes) and on and on and on.

It should be noted that if you only count the 68,484 verified signatures and compare it to the election results that put Newman in office it would mean that 20% of the 317,962 voters want him out of office enough to sign a petition for recall.

Nearly 20,000 more people signed the recall paperwork than voted for him in the primary election. Will of the voters indeed. 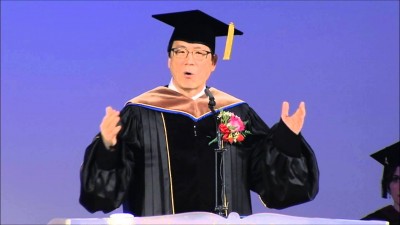 And we end on the idea that voters are smart enough to see the light even though they were too stupid to read. THAT is cynical and shameful.

The clock has already started and the State has 10 days to certify the recall signatures and report them to the Governor who must then call a special election. The question now is whether or not the cynical (D)s will be successful in once against moving the goalposts mid-game to thwart the will of the voters.