Barry Levinson had his microphone cut off on Tuesday before he could finish his exposé on Pat McKinley’s boldfaced lie about crime under his watch. That’s OK, because we can just reprint it here for everyone to see.

The Host asks Councilman McKinley: Should you be recalled and is it fair?

McKinley responds: No, I shouldn’t and it is not fair

McKinley continues: I am very proud of the agency (i.e. the Fullerton Police Dept.) and what we accomplished over the 16 years I was there .

McKinley: We reduced crime every year I was there.

I had heard the comment about reducing crime by Candidate McKinley many times during his campaign for city council.

Here are the facts: The FBI statistics for the City of Fullerton from 2005 through 2009, the last 5 years that McKinley was Chief of Police are as follows: 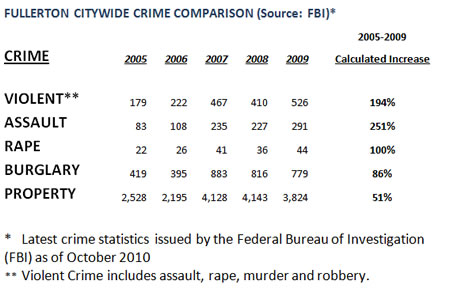 Pat McKinley, I find it reprehensible that you would intentionally and repeatedly mislead the people of Fullerton and the country about the actual level of crime committed in our great city under your stewardship. Repeatedly you have reminded us that being a police officer has been your life’s work.  Yet you cannot even tell the truth about your own record as chief of police.

You have disgraced this city with your misinformation campaigns. You have disgraced this city with your stating that Officer Rincon was not guilty of sexual assault, and allowed him under your command to continue assaulting more and more women after the 1st ladies reported it to your department.  You disgraced this city by hiring Jay Cicinelli, who did not meet the minimum standards to be a police officer in Fullerton or for that matter anywhere in these United States of America.  Officer Cicinelli ended up beating an innocent man to death while he was lying motionless on the ground with a Taser gun that is supposed to save lives not take them.

FOR ALL THESE REASONS AND MANY MORE, PAT MCKINLEY MUST BE RECALLED.  And the only thing that is not fair about this recall is that you had the honor and privilege to be our police chief for 16 years and our councilman for another 2 years.   The damage you have caused this city, emotionally, ethically, legally and monetarily will take us literally decades to recover from.   That is the real injustice here!

60 Replies to “Pat McKinley vs. The FBI’s Crime Stats”