Looks like the anti-recall sponges and parasites have decided to hold a party to raise money for the Three Blind Mice.

Well, good for them, say I. After all, we really need to see what kind of creeps will support the incompetents who created and tolerated the Culture of Corruption in the Fullerton Police Department. 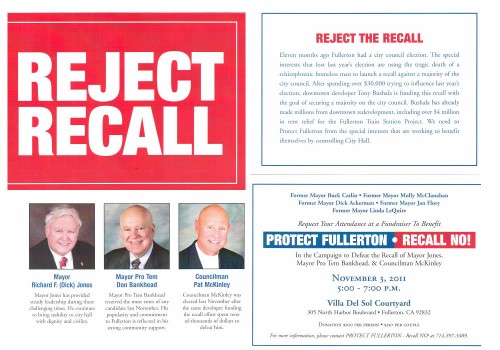 Of course they were going to trot out the Jurassic McClanahan and Catlin – who were both recalled alongside Bankhead in 1994 for imposing a tally unnecessary utility tax on Fullerton. Oh! And here’s Jan Flory who not only supported the utility tax, but even wished it were doubled. And all of them voted year after year to stick us with a 10% tax on our water bills for no damn good reason other than that they could get away with it. Oh, yeah, they also supported every single Redevelopment boondoggle, giveaway, disaster, and money pit.

Well, there’s your sad crew of anti-recall characters. Here’s a thought: let’s sweep the whole rotten Phalanx of Failure into the garbage can of Fullerton history – once and for all!

Can anybody say protest at the Villa del Sol?