We’ve got it on really good authority that former city councilman, State legislator, and current Irvine resident, Dick Ackerman is going to be heading up the anti-recall effort for Fullerton’s Three Blind Mice: Jones, Bankhead, and McKinley. For those of you who don’t recall the name Ackerman, run through our FFFF archives to discover what sort of moral fiber that this individual is composed of. We busted The Dickster cooking up a fake address in 2009 for his incompetent wife to run in our Assembly district although they actually live in Irvine (note: the Mrs was endorsed by Jones, Bankhead, and McKinley). We caught the old lady operating a fake charity for lobbyists so she and Dick could get free trips to Maui. We also cheered when the Voice of OC finally uncovered the smoking gun that tied Ackerman to illegal lobbying on behalf of the crooked OC Fair Board as we had been reporting all along.

Only a few days ago we shared a notice for an upcoming country club event in which Ackerman will hold forth on how to manage a lynch-type mob.

Well, now you know the sort of character we’re dealing with here. But what you might not know is that Dick Ackerman, who works for The Nossaman law firm was recently gifted with a huge windfall by his old pals Jones, Bankhead, and McKinley. See, on August 16th The Three Blind Mice ignored their own professional staff’s recommendation, and instead presented Nossaman’s client, St. Anton Partners a multi-million dollar subsidy on a  60 units per acre low income housing project on Santa Fe Avenue! No wonder Dicky Boy was hanging out at the Council meeting all night and had to endure outraged citizens attacking the incompetence and stoogery of his three puppets on the council for three long hours.

He assists companies, individuals, groups, and public agencies in their interactions with governments at the local, county, state, and federal levels. In addition, Mr. Ackerman assists clients in dealing with government and special districts on how to get through the political process.

In layman’s parlance, Ackerman is a political fixer, an influence peddler, and a lobbyist. Just the sort of guy who would spring to the defense of his trio of myopic rodent pals on the Fullerton City Council.

Here’s the page from the staff report listing the scores of the various “developers” seeking official City endorsement that will pave the way for millions in taxpayer subsidies. Check out Ackerman’s crew, St. Anton. Eighth freakin’ place! And yet Jones, Bankhead and McKinley decided to award millions to the guy who will be running their recall campaign. Stink? Much? 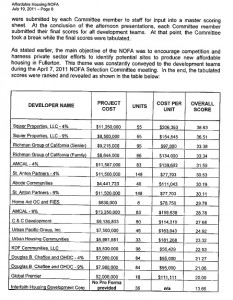 The second most ironic thing about this sad but illuminating story is that when he was on the city council in the 1980s, Ackerman was the most steadfast opponent of publicly subsidized housing in Fullerton. Well, that was then and this is now. See, when you’re a ‘puglican and money’s at stake, principles go right down the toilet. The most ironic thing is that in 1994 Ackerman also championed the cause of three incompetent buffoons who were being recalled. He lost that one, too.

As a thoughtful commenter reminds us, below, McKinley, Bankhead, and Jones were so eager to accomodate their pal Ackerman that they pushed through a vote and then had to rescind it because they never held a public hearing. Another example of Three Blind Stooge FAIL.