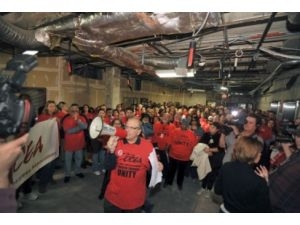 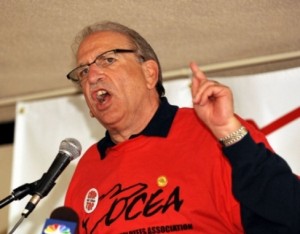 In December of 2008, Nick Berardino and more than 1000 union workers stormed the County’s Hall of Administration to protest the remodeling of the Board of Supervisor’s lobby.   The OCEA leader and his supporters were protesting the $300,000 lobby remodeling project because it was the wrong thing to do because at the time, the County was laying off employees due to the budget crunch that hit the whole nation.

That day, Berardino used his bullhorn to make his point well known. He was also quoted by the lame duck O.C. Register as saying that “Labor knows that financial hardships are on the way and say they are willing to share in the pain. But before he has to look a person in the eye and tell them they are out of work in this economy he wants management (the County) to scratch every perk with the aim of saving jobs.”

Well, Nick  it is time for you to break out your bullhorn again as you look every association member in the eye and tell them why the OCEA felt it necessary to contribute more than $4000 of their union dues to a free spending, incompetent career politician like Tom Daly. This guy’s spending has cost the County jobs!

According to records at the Registrar of Voters, the OCEA has contributed more than $4000 to Tom Daly’s campaigns since 2002. The most recent contribution was in late 2007 for $1600 – prior to Daly’s  purchase of  a $2.1 million money-sucking building.  Why contribute to a politician who has no legislative duties or the ability to save any county jobs. The Clerk-Recorder is just that – a clerk and a recorder. It is an elected position with little political influence. Daly doesn’t know that or it hasn’t registered yet after 8 years of doing nothing but free-spending and taking care of his buddies like Bruce Matthias and Brett “The Brainstormer” Barbre.

Well, Nick where was that bullhorn when County Clerk-Recorder Tom Daly blew $2,100,000 of public money on a real estate venture that could cost another $7,600,000 to fix the problem? This happened in January 2008, months before the $300,000 remodeling project you vigorously protested.

Where was your bullhorn when Clerk-Recorder Tom Daly decided to give out a $48,000 to a political contributor to “brainstorm” an unnecessary sports hall of fame?

Where was that bullhorn when a $1700 a month retainer to a Sacramento government consulting business with no deliverables was discovered?

Why aren’t you using that bullhorn now? How many jobs does this money represent? Wake up OCEA members! It’s time for you to make Your Voices heard to tell Nick to go after every person who is wasting your association dues and tax-payer money that can be used to save your jobs.

Say, Nick. Where is that bullhorn, anyway?