This just came in from David Jerome, who is a Fullerton resident and the author of the Rick Dees-acclaimed novel, “Roastbeef’s Promise.”

I love that there’s finally a close race in the 47th Congressional district. Even more than that though, I envy the citizens of South Fullerton who have the opportunity to vote Liberal Loretta Sanchez off of “Gerrymandered Island.” 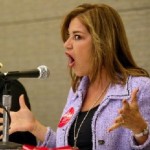 Instead of Loretta Sanchez’s usual Harlem Globetrotters verses the Washington Generals kind of re-election where she can stay in her plush DC office or banter with the Hollywood liberals on the Bill Maher Show, this election Representative Sanchez is forced out into the community to defend her positions and try and explain why her votes have helped to produce a 10% unemployment rate and trillions of dollars of new debt. In recent weeks her attempt at damage control has produced nothing more than a self-inflicted case of foot in mouth disease.

Voters of the 47th are now learning that Loretta Sanchez has the charm and class of Kanye West at an awards show. I became aware of her lack of tact and decency back in 2001 when Congress voted 410-0 on a bill to extend birthday greetings to ailing former President Ronald Reagan on his 90th birthday. Instead of voting with the 410 other Representatives in the affirmative, Loretta Sanchez voted “present” with seven other petty, mean-spirited, and highly partisan members.

Last month, Loretta Sanchez again showed her lack of integrity and two-faces when she spoke to The Orange County Register’s editorial board and claimed that she was a “Blue Dog” (conservative) Democrat (OC Register 9-12-10 Commentary). This came as a surprise to me, so I looked up her voting record over the past two years of government expansion and found that Sanchez had voted almost identically with ultra-liberal House Speaker Nancy Pelosi. (www.nationalrepublicantrust.com/Pelosiindex).

Voters of the 47th might be shocked to discover that Representative Sanchez’s recent voting record with Speaker Pelosi’s is 98%, a frequency level higher than several other liberal Congressional stalwarts including: Maxine Waters 93%, Henry Waxman 93%, Shelia Jackson Lee 93%, John Conyers 92%, and Dennis Kucinich 79%. Does anyone other than Hugo Chavez think that Nancy Pelosi or any of these other members are conservative Blue Dog Democrats?

Sanchez voted for the $800 billion stimulus package that, like an entree at Denny’s, shows up on the table looking nothing like the fabulous picture on the menu. Sanchez then, without reading the 2,400 page bill, merrily danced to Pelosi’s puppeteering and voted for Obamacare. So with Loretta’s help, the Democrats are now governing like carnival barkers at the Grab Bag booth. “Step right up, step right up, vote for the bill first, and we’ll see what’s in it later!”

The expose of Loretta Sanchez continued last month on Spanish television when she (in muy mal Espanol) claimed that the Vietnamese and Republicans were trying to take her seat. A typical response for a liberal elistist, dividing people by race and claiming ownership of the power temporarily bestowed upon her. Because of her “us” verses “them” comments, Representitive Sanchez is now about as popular with the Vietnamese community as a fly in their Pho. Will the 14-year rein of liberalism in central Orange County end with the fall of Sanchez? Will an evacuation helicopter land on the roof of Loretta’s Garden Grove office building on November 2nd and whisk her away to “us” land? One can only hope.

Thankfully, the re-election spotlight is finally being shone upon Loretta Sanchez and voters are getting a closer look at who she is and what she has done. Our South Fullerton friends are hopefully now discovering what a 14-year embarrassment she has been to this county. I am fully convinced that Van Tran could show up for his swearing-in next year at the Capitol Building wearing nothing but a rainbow wig and an autographed Octomom nursing bra, and still not embarrass us as much as Liberal Loretta has during her tenure.

22 Replies to “Roastbeef on Loretta Sanchez”